Stay up late this Saturday, July 30 for midnight screening of 'Dr. Caligari' at Coolidge Corner 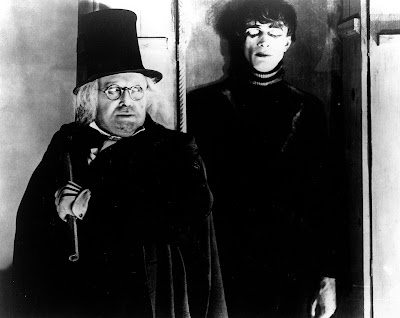 Stay awake to see Cesar the Somnambulist in 'The Cabinet of Dr. Caligari' (1920)

I'm looking forward to this weekend's midnight screening of 'The Cabinet of Dr. Caligari' (1920) at the Coolidge Corner Theater in Brookline, Mass.

For those who've never experienced this very important (and very strange) piece of early cinema, I can't think of a better environment in which to do so.

And finally, the middle of the night? Check and double check!

Really: semi-drowsiness might be the ideal state to appreciate the dream-like visual world in which 'Caligari' takes place.

So hope to see you at the Coolidge on Saturday, July 30 when the clock strikes 12! More details in the press release below... 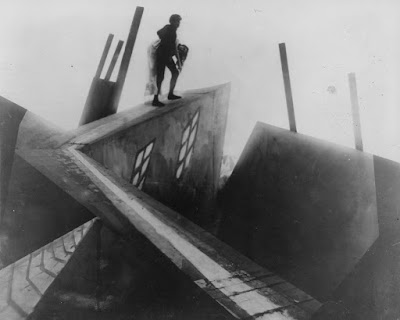 BROOKLINE, Mass.—A creepy silent film regarded as the forerunner of all horror movies will be shown at a midnight screening at the Coolidge Corner Theatre, 290 Harvard St., Brookline, Mass.

'The Cabinet of Dr. Caligari' (1920) will be shown at midnight on Saturday, July 30 as part of the Coolidge's ongoing 'Carnival of Horror' series.

Set in an insane asylum, 'The Cabinet of Dr. Caligari,' is considered a landmark in early cinema. Nearly a century after its release, the film still has the capacity to creep out audiences.

"A case can be made that 'Caligari' was the first true horror film, critic Roger Ebert wrote in 2007.

'Caligari,' made in Germany after World War I and directed in expressionist style by Robert Wiene, stars Werner Krauss and Conrad Veidt.

To add to its strange visual design, the actors used an exaggerated technique that employed jerky and dancelike movements.

The movie is also cited as having introduced the surprise "twist" ending to cinema. 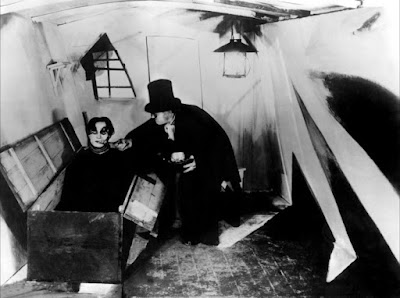 Conrad Veidt and Werner Krauss, two big names of early German cinema, star in 'Cabinet.'
"Silents such as 'Dr. Caligari' are films that first caused people to fall in love with the movies," Rapsis said. "The aim is to present them as they were originally intended to be shown: in a theater, on a big screen, with live music, and with an audience. If you can put all those elements together, these films leap to life."

In scoring 'The Cabinet of Dr. Caligari,' Rapsis plans to augment the traditional orchestral sound with the vocabulary of film music from later eras.

"Because I improvise the music, it's hard to know what will happen until the film actually starts running," Rapsis said.
'Caligari,' a forerunner of the 'film noir' genre, has influenced generations of movie-makers.

A sequel of sorts was released in the 1980s with the film 'Dr. Caligari,' which dealt with the granddaughter of the original Dr. Caligari and her illegal experiments on her patients in an asylum.
The Coolidge Corner Theatre is an independent, nonprofit cinema and cultural institution. Since 1933, audiences in the greater Boston area have relied on the Coolidge for contemporary independent film, repertory, and educational programming.
'The Cabinet of Dr. Caligari' (1920) will be shown with live music at midnight on Saturday, July 30 as part of an ongoing "Carnival of Horror" series at the Coolidge Corner Theatre, 290 Harvard St., Brookline, Mass. General admission $15.50; for more info and to buy tickets, visit www.coolidge.org or call (617) 734-2500.
Posted by Jeff Rapsis at 8:44 AM