Heading Downeast to accompany Buster's 'Butler,' but first some thoughts on 'North by Northwest' 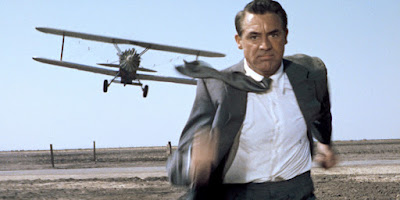 Yesterday I went down to the Brattle Theatre in Harvard Square to catch a matinee screening of 'North by Northwest' (1959) in 35mm.

Why? Because I plan to someday work on a book that tells a story based on Hitchcock's spy thriller. I'm not quite there yet, but soon.

For now, all I can do is report what I overheard yesterday afternoon in the theater, which was surprisingly crowded.

Young Person Behind Me Before Show Started: "Wait, this film is in color? So did they invent color between the last film we saw and this one?"

This caught my attention. Further discussion revealed that they'd recently seen the Orson Welles' 'Touch of Evil' (1958), made the year before 'North by Northwest,' and the assumption was apparently was that once color was available, everything just switched over to it. Wow.

Well, whatever. We all discover the world around us in our own way And people have to start somewhere.

And I should be glad that they're willing to spend a sunny Sunday afternoon in a darkened theater with Cary Grant and Eva Marie Saint and Bernard Herrmann, or watch a film such as 'Touch of Evil' in a theater. (Which they apparently had done.)

After the Hitchcock film ended, the comment I caught was: "Was that supposed to be good in a kind of 'so bad it's good' kind of way?" Again, wow.

Well, not sure what they'd make of Buster Keaton in 'Battling Butler' (1926), but that's the film I'm accompanying this Wednesday at the Leavitt Theatre in Ogunquit, Maine.

My Brattle neighbors may not be in attendance, but I hope you will. Below is the press release with all the info... 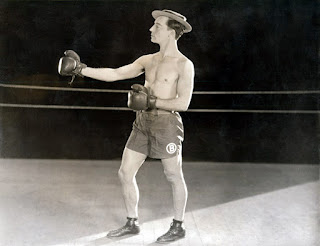 Buster in a posed shot with his porkpie hat (which he doesn't wear in the film) from 'Battling Butler' (1926).

See for yourself with a screening of 'Battling Butler' (1926), one of Keaton's landmark feature films, on Wednesday, July 13 at 7 p.m. at the historic Leavitt Theatre, 259 Main St, Route 1 in Ogunquit, Maine.

Admission is $12 per person. Live music will be provided by accompanist Jeff Rapsis, a New Hampshire-based performer who specializes in creating music for silent film presentations.

Keaton, along with Charlie Chaplin and Harold Lloyd, stands as one of the silent screen's three great clowns.
Many critics regard Keaton as the best of all; Roger Ebert wrote in 2002 that "in an extraordinary period from 1920 to 1929, (Keaton) worked without interruption on a series of films that make him, arguably, the greatest actor-director in the history of the movies."
While making films, Keaton never thought he was an artist, but an entertainer trying to use the then-new art of motion pictures to tell stories and create laughter. 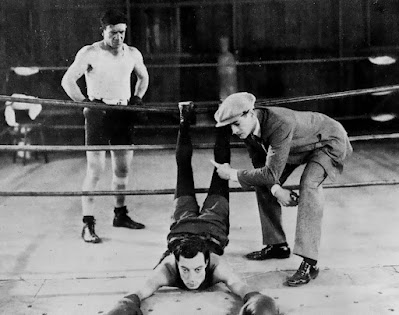 The Leavitt Theatre's silent film screenings provide local audiences the opportunity to experience silent film as it was intended to be shown: on the big screen, in restored prints, with live music, and with an audience.

“These films are still exciting experiences if you can watch them as they were designed to be shown,” said Rapsis, accompanist for the screenings.

Following 'Battling Butler' on Wednesday, July 13 at 7 p.m., other programs in this year's Leavitt silent film series include:

• Wednesday, July 27 at 7 p.m.: Greta Garbo in 'The Temptress' (1926). MGM drama with Garbo destroying the lives of men everywhere. Unusual in that the film was made with two very different endings per order of studio boss Louis B. Mayer; both will be screened.

Buster Keaton stars in 'Battling Butler,' to be shown on Wednesday, July 13 at 7 p.m. at the historic Leavitt Theatre, 259 Main St, Route 1 in Ogunquit, Maine.