Up next: Garbo and Moore double feature, but first: my annual fried seafood pilgrimage 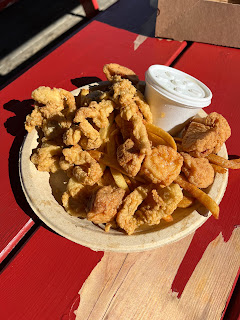 I can think of two ways I don't mind my federal tax dollars being spent.

One is film preservation efforts by the Library of Congress. More of that, please.

The other is coastal fishing subsidies, which enable we citizens to enjoy a reliable supply of fried clams and scallops.

(Okay, with maybe some allowances for national defense and a transportation network. But not too much.)

Anyway, with the second priority in mind, yesterday I made my once-a-year pilgrimage to Ceal's Clam Stand in Seabrook, N.H.

The result is seen above; a combo plate of clams and scallops, served on french fries and with coleslaw on the side. Eaten at a peeling red picnic table 100 yards from the Atlantic Ocean, there's nothing like it.

I really can't indulge in a jumbo-sized plate of fried seafood but once a year. More often, and I'd probably end up in the hospital, and also go broke. (This year's combo plate "market" price: $40.28.)

But if you do it once a season, Ceal's is the place to go. It's a well-worn shack along Route 1A that's been in the same family since 1948. Open only from Memorial Day to Labor Day, they do something with the batter that makes it unlike any other.

Also, they fry the seafood separately from the potatoes or chicken tenders, and I think that makes a HUGE difference.

The fried seafood feast preceded a screening of Buster Keaton's 'Battling Butler' (1926), which I accompanied that evening up the coast at the Leavitt Theatre in Ogunqit, Maine.

July and August being the two business months of the year for New England's coastal resorts, so the Leavitt was blessed with a solid turnout of 83 people.

And although 'Butler' has a reputation as one of the lesser Keatons, last night's screening produced consistent laughs right from the opening scene, where an effete Buster is told to rough it outdoors and make a man of himself.

People really got the comedy right away, cracking up at the sight of valet Snitz Edwards straightening Buster's hair as he sits passively on a divan.

It was that way throughout the film. During the final climactic fight in the dressing room, Buster's sudden transformation into a silent film Canelo Álvarez even earned him a spontaneous ovation — something I've never seen happen with this film.

So a good time was had by all, except the boxing champ whom Buster beat senseless. Then again, maybe he enjoyed the change of pace.

As for the music: well, I found that more than ever, less is more. 'Butler' in particular seems to benefit from a very light touch throughout, which I was able to maintain.

For contrast, there are a few times where a loud, blaring march came in handy. It's especially effective to play "Here Comes the Bride" as performed by a local town marching band on-screen.

Next up is a double feature in the ongoing 'Women of the Silent Screen' series at the Town Hall Theatre in Wilton, N.H.

It's Greta Garbo vs. Colleen Moore in a two-for-one program that pairs drama with comedy. Showtime is Sunday, July 17 at 2 p.m.; for more details, check out the press release below. 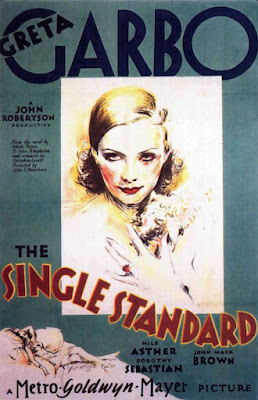 A poster for 'The Single Standard' (1929), a late MGM silent starring Greta Garbo.

WILTON, N.H.—A double feature of two very different films is next up the Town Hall Theatre's summer-long salute to female stars of the silent screen.

Weary of the "good old boy" mentality which dictates that men can flit from girl to girl while women are expected to remain faithful, San Francisco socialite Arden Stuart (Garbo) decides to adopt the "single standard" and play the field herself. 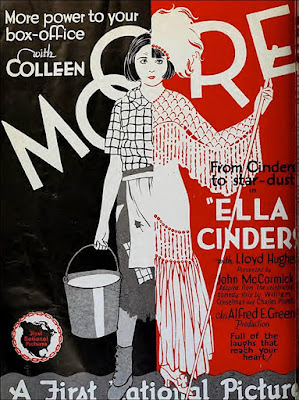 First prize is a trip to Hollywood and a screen test, but when Ella arrives in Tinseltown, she discovers that the contest was a fraud.

Momentarily disheartened, Ella vows to get into pictures by any means possible.

Here's the line-up of upcoming screenings:

• Sunday, July 24 at 2 p.m.: Norma Talmadge in 'Within the Law.' Silent screen dramatic star Norma Talmadge plays a shopgirl wrongly imprisoned, and bent on revenge against the man who wronged her in this vintage 1923 release. Filmed on location in New York City.