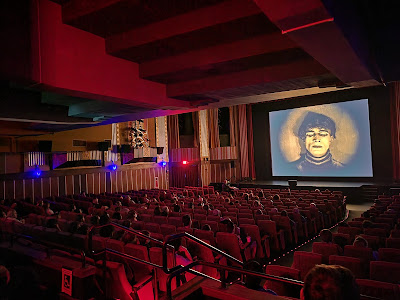 Accompanying a midnight screening of 'The Cabinet of Dr. Caligari' (1920) at the Coolidge Corner Theatre.

It's down to Rhode Island this Friday to accompany a screening of 'Safety Last' (1923) at the Jane Pickens Theatre in downtown Newport.

Showtime is 7 p.m.; lots more detail in the press release below.

But before going onward to the Ocean State, let us go backward to the Bay State, where this past weekend I accompanied a midnight screening of 'The Cabinet of Dr. Caligari' (1920).

It was at the Coolidge Corner Theatre in Brookline, Mass. (right outside of Boston), and to everyone's surprise, attendance was strong—something like 150 people, most of whom had never seen the film before.

I had a few simple motifs in mind, and enjoyed playing with them to help support the film. I don't "Mickey Mouse" the action, but I do tend to track pretty closely to the film's changing moods, which I think helps a modern audience stay with the film.

The film is divided into six "acts," which give the accompanist a chance to reset the music and signal that something different is coming. I don't know 'Caligari' that well, but I managed to reach some kind finality at the end of each act, and then went off in a total different direction, even if I wasn't sure what was coming next. It worked!

One thing no one expected was my big brass handbell, which I use exactly three times during the movie, when Caligari uses one to summon spectators.

Great comments afterwards, which mean it was 2 a.m. and I'm not sure how coherent I was. (I'm never that coherent right after a film. Or before.) But I was delighted to find out that the sequence I picked to really build the music to a big climax—when Caligari hears voices saying he "must be Caligari"—was enough to send shivers up the spine of one attendee. Nice!

Shivers of a different kind are in store for those who attend Harold Lloyd's 'Safety Last' on Friday in Newport, R.I. Hope to see you there! If you're in California, an early morning flight into Providence, R.I. will get you there in plenty of time.

So there's no excuse. What are you waiting for? 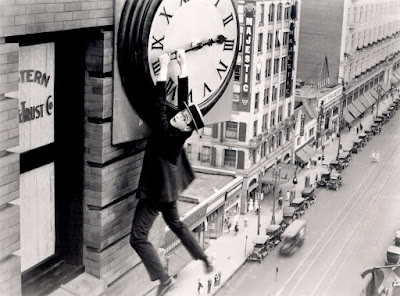 From 'Safety Last': the image everyone remembers.

The vision of Harold Lloyd hanging from the hands of a huge clock, from the climax of his silent comedy 'Safety Last,' (1923), has emerged as a symbol of early Hollywood and movie magic.

See how Harold gets into his high-altitude predicament with a screening of 'Safety Last,' one of Lloyd's classic comedies, on Friday, Aug. 5 at 7:30 p.m. at the Jane Pickens Theatre and Event Center, 49 Touro St., Newport.

General admission $15; members $13. Tickets available online or at the door. 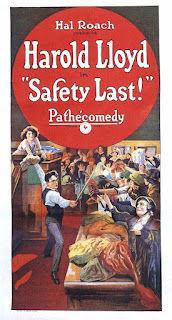 'Safety Last' follows young go-getter Lloyd to the big city, where he hopes to make his mark in business and send for his small town sweetheart.

His career at a downtown department store stalls, however, until he gets a chance to pitch a surefire publicity idea—hire a human fly to climb the building's exterior.

However, when the human fly has a last-minute run-in with the law, Harold is forced to make the climb himself, floor by floor, with his sweetheart looking on.

The result is an extended sequence blending comedy and terror that holds viewers spellbound.

Lloyd, along with Charlie Chaplin and Buster Keaton, is regarded as one of the silent screen's three great clowns.

Lloyd's character, a young go-getter ready to struggle to win the day, proved hugely popular in the 1920s.

While Chaplin and Keaton were always favored by the critics, Lloyd's films reigned as the top-grossing comedies throughout the period.

Silent film at the Jane Pickens Theatre gives today's audiences the chance to experience early cinema as it was intended: on the big screen, with live music, and with an audience. 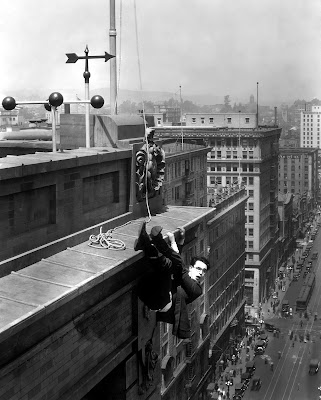