Got word last night from New York accompanist Ben Model of an event in my own backyard that I didn't know about: the premiere next week at Keene (N.H.) State College of a recently rediscovered 1913 drama directed by and starring Francis Ford, older brother of legendary filmmaker John Ford. The print of 'When Lincoln Paid' was found a few years ago by a contractor tearing down a barn in Nelson, N.H., a tiny rural town in southwest New Hampshire. Now, after a lot of restoration work, the film is once again ready for the big screen, and a showing was set for next week at the college. Below, I've posted a still from the film showing the director in the role of Abraham Lincoln; you can read more in this post from Keene State. 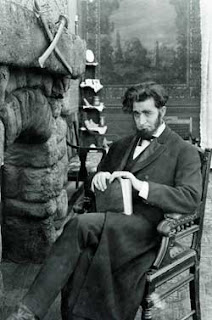 I had no idea all this was happening, so I got in touch with Larry Benaquist, longtime film guru at Keene State, which is only about an hour from where I live. Larry got right back to me this morning; it turned out they were planning to use recorded piano music for the screenings but he was open to me helping out. I was grateful for the chance to contribute some live music, as it can really make a difference in a silent film's presentation and impact. Larry's mailing me a DVD of the film so I can get a look at it beforehand; we'll go with either the house piano (if it's up to it) or the digital synthesizer, which I'll lug along in case it's needed.

It's utterly amazing to me that something as fragile as nitrate film can survive any time at all in a New Hampshire barn, never mind decades and decades. But it happens. Two years ago, Dennis Markaverich of the Wilton Town Hall Theater brought down an old metal box for archivist Dave Stevenson to examine. It turned out to contain a completely intact nitrate release print of 'The Wishing Seat,' a heretofore lost 1913 one-reel drama directed by Allan Dwan.

So things keep turning up, which means there's at least a little hope for that missing last reel of 'Paths to Paradise' (1925), my favorite Raymond Griffith comedy.
Posted by Jeff Rapsis at 5:56 PM