Our screening of "The Seahawk" last night (Monday, April 5, 2010) at the Palace Theatre in Manchester, N.H. went pretty well. Turnout was a bit light, but enough people were on hand to provide the live audience boost that's an essential part of the silent film experience, I think. There's a picture below of me talking to the pre-show crowd. 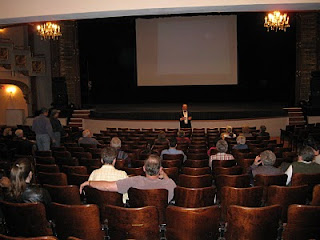 We generally use DVDs and a high-lumen nuclear-powered projector for the Palace screenings, which fills the screen with a bright, sharp image. The only issue we run into is source quality, and in this case, our DVD of "The Seahawk" was good (it's one of the Warner Archives DVD-R releases), but it began unexpectedly catching just after the film's halfway point. Every few seconds, the frame rate would slow to a crawl, then speed up again. Dave Stevenson (acting as projectionist) tried pausing the disc to snap it out of this behavior, but it continued to do it for a good 15 minutes, and was a real distraction, I thought. Thankfully, the issue cleared up on its own, and afterwards I was surprised to hear from some audience members that they didn't notice.

Musically, I'd give it a B. I was in the zone for much of the film, and the few melodies and chord signatures I'd developed provided plenty of material to develop a score on the fly. We had a heroic "on the high seas" theme, a love theme, and a forboding pattern, all of which could be transformed pretty easily, depending on the picture's flow. A harpsichord patch I rarely use came in handy to establish the aristocratic atmosphere of the scenes in Elizabethan England.

One missed opportunity was in the last Algiers scene, when I had planned to use a dramatic synthesizer patch that includes a lot of exotic clanging bell sounds, but I completely forgot to switch over until it was too far into the scene. Sometimes you wind up with a wrong setting and you just have to deal with it, because changing in mid-scene can be jarring sometimes, which detracts from the film.

Another highlight was meeting a volunteer usher who recalled attending silent films during his childhood in Bucharest, Romania in the early 1930s. We get a healthy contingent of volunteers at all our Palace screenings, and this was one I hadn't met before; unfortunately, we didn't get a chance much before it was showtime. I hope to catch up with him again at a future screening, as it's becoming increasingly rare to encounter people who experienced the silent era directly. But you never know who might turn up at our screenings: last year, a woman attending a screening of Chaplin's great film 'The Kid' (1921) claimed that as a boy, her father worked as child actor Jackie Coogan's stunt double in the film! At a screening of 'Wings,' (1927) a while back, a woman who attended was the daughter of a biplane pilot who as a young man trained all the other pilots for the movie, and played one of the German aviators. She'd heard about the film her whole live but had never had a chance to see it, and so was visibly moved to finally take it in. It's hard not to be moved by that picture.

The projector, by the way, is borrowed for these screenings from Bill Millios and Jim McCracken, two New Hampshire-based filmmakers with whom I had the pleasure of working with a few years ago on "Dangerous Crosswinds," an independent feature film for which I wrote the music. These guys have been beyond generous to let us use this piece of equipment, and I want to thank them for their support. Check out their Web sites at www.backlotfilm.com and www.lunchboxfilms.com.
Posted by Jeff Rapsis at 10:21 PM