Some photos from 'King of Kings' screening

At our screening of 'King of Kings' on Sunday, March 28 at the Wilton Town Hall Theatre in Wilton, N.H., I asked a photographer, Joanna Rieke, to come by and try taking some photos. It's a challenging assignment: a dark room with a lit up movie screen. She came up with some good shots before the show, when I take a few minutes to introduce the program, and "action" shots from when the film is running. She's planning to come back to our next Wilton screening on Sunday, April 25 to try some more, but here are a few images to give you an idea of what she came up with.

First, here's a shot of me warming up while the audience is getting settled. Movies have been shown in this location since 1912! 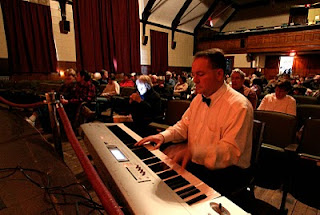 Next is me doing the introduction. (Looks like I need to spend a little more time in the gym before bathing suit season.) The bow tie was for the camera, but also because it was 'King of Kings' and Palm Sunday, so it was the right thing to do. My big joke was to ask how many in the audience were Catholics, and then to say I'd "checked with the Diocese of Manchester, and this afternoon's screening does actually count as Mass." Follow-up comments about bread and wine/popcorn and soda pop and cinema being all about suspension of disbelief were less well received. 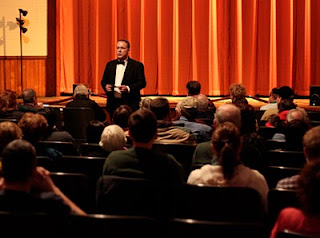 Finally, here's an action shot. These kinds of photos are really tough to pull off and I think Joanna did a nice job. During longer films, I often enter a kind of trance that's similar, I think, to the state of "flow" that I've heard described by people who study the mind. While the film is on the screen and I'm at the keyboard, the rest of the world drops away, and this image seems to capture that. I look like I'm hypnotized, and I think I am, in a sort of self-governed way. 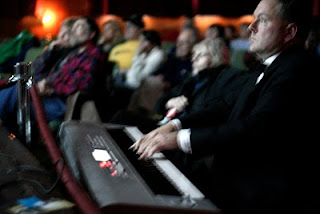 Next up is 'The Seahawk' at the Palace Theatre in Manchester, N.H. on Monday, April 5 at 7 p.m. We have a couple of good short films planned for that screening as well, both restored and reissued by Dave Stevenson at Looser Than Loose Vintage Entertainment: a short animated film about income taxes (look out, here comes April 15!) that shows how some things just haven't changed at all since the 1920s; and Harry Langdon's sea-faring short comedy "Shanghaied Lovers," a two-reeler that Dave restored to completeness after finding much of the long-missing first reel included in a kinescope of an old Howdy Doody TV broadcast.
Posted by Jeff Rapsis at 10:00 AM