Fun screening this afternoon in my hometown library (in Bedford, N.H.) as part of a monthly music series they run. Unusual in that it was also the annual meeting of the Friends of the Library, and since I was set up and ready to go, I couldn't resist punctuating the usual business meeting activity with a little musical support: fanfares for motions passed, etc. 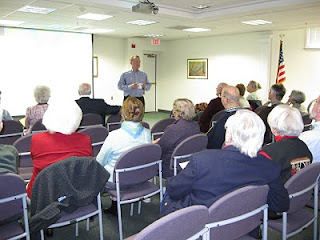 A good group was on hand, especially for a one-off screening on such a beautiful early spring day. First up was the Keaton film 'Cops,' which got a strong reaction, and was accompanied on the library's Mason & Hamlin grand piano, which has a real heavy action and is physically exhausting to play. Here's a photo of the beast: 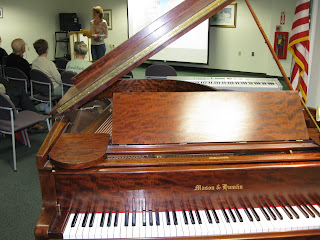 As I just didn't have it in me to accompany a full-length feature on that instrument, I scooted home just prior to the show and fetched my Korg synthesizer/speaker setup and lugged it over for "Steamboat Bill, Jr." As for the score, it took awhile to get into the zone on this one, but some sequences went very well, especially once Buster and Ernest Torrence got on screen together.

Alas, it's one of those spaces that absorbs the sound, with a suspended ceiling and wall-to-wall carpeting and such, and so there was no reverb and the music from both piano and synth sounded quite muffled, I thought. Audience reaction was a little less than usual, and I'm not sure why. The print looked good to me, but one audience member said afterwards that he couldn't tell that the last guy rescued by Keaton was a minister, so maybe...but this mystery is one of the interesting things about live performance.

Still, a fun screening and a real treat to be able to do a show in my hometown. Hope we can do more, but I'd prefer to do them in Bedford's 'Old Town Hall' (right across the street) as things would probably sound a lot better and wouldn't be quite so claustrophic. Emerging maxim: silent films play better in places with high ceilings, where people literally must look up at them...
Posted by Jeff Rapsis at 9:49 PM