An appreciative audience was on hand for our birthday tribute to Harold Lloyd (born April 20, 1893) held at the Wilton Town Hall Theatre in Wilton, N.H. on Sunday, April 25. Also on hand was photographer Joanna Rieke, who had the challenging assignment of capturing the shadowy world of silent film accompaniment. She came up with some great and unusual stuff, and I've included a few of her images in this post. 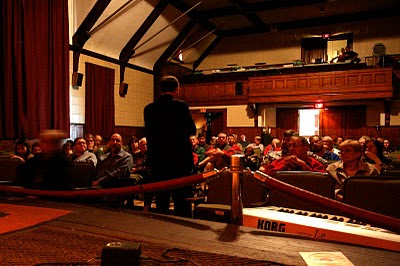 The featured attraction was 'Grandma's Boy' (1922), which drew a strong reaction right from the prologue, when Harold appears as an infant in horn-rimmed glasses. The sequence where Harold must rid himself of a litter of kittens drew roars, and the subsequent scenes of Harold and his rival eating mothballs provoked sustained laughter, climaxed when both men drink what they think is water, but isn't. Once a film gets going like this, I try to keep the scoring low so as not to step on the laughter. At some point, you really don't have to play! Another big burst of laughter came from the first glimpse of the portrait of Harold's grandfather, with his square horn-rimmed glasses. How interesting to think that an audience could "get" Lloyd's character in that way, even without sustained exposure. The same thing happened recently when we screened 'Steamboat Bill, Jr.' (1928); during the "trying on hats" sequence, the audience cracked up when Keaton hastily removed his traditional porkpie. (I think showing the short 'Cops' (1922) beforehand helped a bit.)

In 'Grandma's Boy,' music can really add something, I think, when the film's tone shifts from parlor antics to scenes of the manhunt, and I was happy with how this turned out: as the sheriff (Noah Young, for once not playing a dunce) recounted the events in the flashback, the music deepened and darkened, so when we come back to present, the stakes are that much higher, which not only heightens the comedy, but sets the stage for Harold's transformation. In his book "The Silent Clowns," Walter Kerr described Lloyd as an "architect of sympathy," and I see what he meant: everything in this films plays a role in getting us to root for Lloyd. 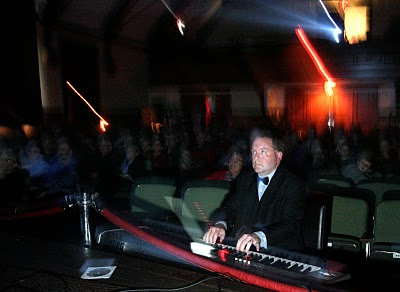 By the way, people often rag on the old "Time-Life" versions of Harold's films that were shown on TV in the 1970s (when I first got to see them), but I remember being impressed with sequences such as when the dam money is discovered missing in 'The Kid Brother,' and how the ominous music helped signal how things had changed. Suddenly things get serious, and music can really help communicate that extra layer of tension.

I also know what Kerr meant when he remarked on Lloyd's use of the "double climax."
Posted by Jeff Rapsis at 7:19 PM