I had the pleasure of doing music for a screening of the restored film 'When Lincoln Paid' (1913) on Tuesday, April 20 at Keene State College. A print of this rare Francis Ford film was found in a barn in Nelson, N.H., and so pre-screening publicity was aided quite a bit when the Associated Press picked up a story about it. Interest was intense enough for KSC film professor Larry Benaquist to move the screening from the college's Putnam Arts Center to a much larger auditorium in the new student center.

I'm so glad he did! The student center space was a wonderful venue for a screening with live music, with bright digital projection on a large screen and wooden flooring that made for great sound. And sure enough, the place was filled: 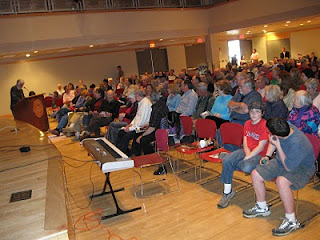 That's Larry Benaquist at the podium making a few remarks prior to the screening. The musician would be sitting at the keyboard, but he was busy taking pictures. It was a real pleasure to work with Larry, who is retiring later this year after being a fixture at Keene State College for decades. He's done a lot to promote film and cinema in this part of the world, with this restoration of 'When Lincoln Paid' only the most recent example.

It was also great to meet the folks who owned the barn, and the contractor who discovered it, and so many other people in the college community with an interest in vintage cinema. We may end up doing a series of screenings there at some point thanks to this connection. (So again, thanks to Ben Model, the New York accompanist who first pointed me to this project just a week ago.)

The screening went well, especially because a slide show of stills and clips from other Francis Ford films was cycling through prior to the program. I wound up improvising accompaniment for it, which gave me a chance to settle in and warm up in advance of plunging into the actual film. 'When Lincoln Paid' is only about two reels and involves a lot of rapid shifts of time and tone and some dramatic action, too, and it's hard to get into "the zone" in that short amount of time. So the preview was a lucky break.

I only had a couple of days to work up music for the film, so most of what I used was borrowed from earlier efforts: a little 'Tol'able David' here, a little 'The Wind' there. Started small with just woodwind settings and plain Aaron-Copland sounding country melodies on open fifths; then, as the action intensified, introduced percussion and other layers. Finally, let loose with everything during the surprisingly ambitious battle sequences.

Tried to avoid too many obvious melody insertions, but did find myself using the tune of 'Yankee Doodle' in the bass, played slowly and in a minor key underneath arpeggios and repeated notes in the right hand above it, which actually sounds pretty ominous. And a few quotes from 'When Johnny Comes Marching Home' were enough to set the mood without hitting people over the head with it again and again.

The film received an extended ovation, which was really nice to hear. Larry, who took a chance on me with little notice, was thrilled, and he generously said afterwards that the music "quadrupled the emotional impact of the film." High praise from someone whose opinion I greatly respect.

Afterwards, we trooped over to the Putnam theater to see the restored material projected on actual 35mm film. A smaller group attended this screening, which was interesting and very worthwhile, as, after all, it's film we're talking about here. Unfortunately, the piano was a small upright with very tough action and tinny sound, and wasn't really in tune, either, so the music wound up being very "Dudley Do-Right"-ish. Also, the theater is beautiful, but has padded seating and carpeting over most the surfaces, so the sound from an acoustic piano really gets swallowed up whole.

I always wondered about pianists who seem overly fussy about instruments, but after living the silent film scene for a while, I really do understand what a difference it makes. Just like people, there are good pianos and bad pianos, and it's okay to make judgments—to decide which ones you'd like to hang around with and visit regularly, and which are best avoided. I'm lucky the Korg synthesizer I use is relatively portable, so it's not hard to lug it around even for a "just in case" kind of scenario when the piano is unfamiliar to me and I want to be sure...
Posted by Jeff Rapsis at 9:00 AM