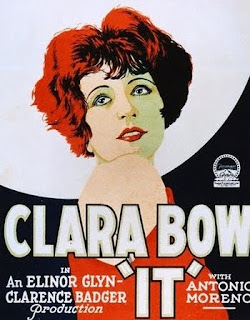 Yesterday (Tuesday, Feb. 22) I accompanied a screening of 'It' (1927) for a class at the University of New Hampshire/Manchester led by Jeff Klenotic, a film studies professor. I hadn't played this film before, and somehow had never even seen it in all these years, so it was a good opportunity to check out one of the silent era's iconic titles. That fact that it was full of Clara Bow didn't hurt, either.

To my surprise, I found the film...well, rather insubstantial. It was a light romantic comedy, and there's nothing wrong with that, but for some reason I had been expecting something a bit more cataclysmic, or at least scandalous, along the lines of the film version of 'Chicago' released at about the same time. I mean, after, what kind of assumptions would you make about film whose title is one big fat euphemism?

Instead, we get Clara Bow stringing along her wealthy boss, with not much really at stake for either of them as they play cat and mouse from the dining room of the Ritz to the boss man's luxury yacht. Not a bad film, I guess, but not a very visual one, I think. It could have just as easily been a stage play.

The one compelling element of the fatherless baby is treated as a mere plot complication of the mistaken-appearance variety, which causes the moments of drama that we DO witness seem out of place, and it also fails to raise the stakes of the budding romance. (Will the kid get a better life somehow if they tie the knot?)

However, 'It' does have a certain polish and some nice touches to recommend it, including a clever surprise visual that comes up unexpectedly right at the very end. It must have sent audiences out of the theater smiling, just as I found myself doing as I went for the final cadences.

For the music, I got to play a very tough Yamaha grand piano that I know quite well by virtue of my MBA classes in earlier years at that school. By tough, I mean it has a heavy action and it's really, really tiring to play. After about 30 minutes, I found I had absolutely no spring left in my fingers, and it was rough going for a while.

Still, it was good preparation for the next adventure: a trip out to Topeka, Kansas for the Kansas Silent Film Festival. I'm doing some music there, and it's also on a grand piano, but this one a much easier beast to play. I've found that accompanying a film on a piano of any sort is a completely different experience from the digital synthesizer (especially with regard to sustained notes), so it seemed wise to get back to an acoustic keyboard prior to heading out to Kansas. We'll see.

For the music, I made heavy use of a little ragtime melody I came up with the night before. It seemed to fit as a good all purpose tune. Other than that, it was extensive recycling of pre-existing material, including a few snatches of "Row, Row, Row Your Boat" during the yacht scenes and a large amount of what I intend to play as the "Overture" on Friday night in Kansas.

'It' is a fun film for music, though, because it really is rooted in the spirit of the 1920s in a way that's still recognizable even today, all this time later. Somehow it comes through, and so a good score might have a good chance at enhancing it. Or 'It.'

Good reaction from UNH students and some of the general public who turned out to take in 'It.' Nice to hear some of them say they expected it to be about exciting as watching paint dry, but in the end found it absorbing on several levels.
Posted by Jeff Rapsis at 10:19 PM