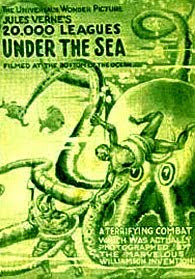 Coupla quick notes on scoring the 1916 version of '20,000 Leagues Under the Sea.' I made my Boston debut last night, doing music for a screening of this film, part of this year's Boston Science Fiction film festival.

It was quite a film in its day, with underwater sequences that must have amazed original audiences. Festival organizer Garen Daly described it as "the 'Avatar' of its time," and that truly seems to have been the case.

Today's audiences have seen it all, however, so these days this version of '20,000 leagues' might come across as a little less than impressive. So music becomes that much more important, I think, in creating a spell and putting the film over.

In scoring silent films, I usually stick with a conservative orchestral texture. But because this was science fiction, and because of the nature of the festival, I felt free to call on some of the more exotic outputs of my digital synthesizer.

It was a nice change of pace, actually. And especially effective, I think, was the music I did for several long sequences of underwater viewing, which on their own are pretty tame going.

For these, I created a kind of Philip_Glass style accompaniment of slowly transforming arpeggios that gradually climb through a pattern of keys. The arpeggios sound waterlike-enough, and the key progression lends just enough forward motion to lend a sense of getting somewhere to the fairly static scenes.

The trick to making it sound dense enough is to lay on a top note in the right hand, usually played by the pinkie just holding down a note, and then in the left hand do four-note arpeggios against three-note ones in the remaining fingers of the right.

With cycles of three against cycles of two whirling against each others, and with the sustained top note to hold it all together, it adds up to one of these textures that can bring a mild state of hypnosis. 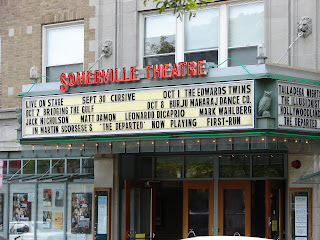 I was worried it might seem boring but afterwards no one in the audience had any specific complaints about it. So I'll keep it in for the BIG screening this Sunday. Last night's, held in a smaller screening room, attracted about 20 film buffs and the curious. But Sunday's showing is part of the festival's annual 24-hour science fiction marathon, which more than 500 people are expected to attend.

It's in the main theater, so we'll see if my speakers are up to the challenge. In any case, I can't say enough for the Somerville Theatre, and especially its head projectionist, a guy named David. He took me on a tour and I'm amazed at the capabilities of this theater.

David, who calls himself a "dinosaur," was called out of retirement by the management, but under one condition: that they build him his "dream projection booth." They've followed through, and the result is the cleanest, best-stocked most well-organized projection facility I've ever seen anywhere.

For instance: in shelves a wall, David has lenses for every 35mm format ever used, and he's closing in on 70mm as well.

It made me think of the newspaper business. We can print the best-looking paper in the world, but if no one does the unglamorous job of delivering it, it doesn't matter. Likewise, Hollywood can make a great film, but if it does not get projected properly, it's all for naught.

And there's so much to the art of projection: Aspect ratios, film stock, lighting, focus, reel changeover, sound issues, and so on. David is a long-time master at all of this, and there are fewer and fewer like him. It's a trend that I fear will only accelerate with Hollywood's ongoing switchover to digital formats—hence David's description of himself as "a dinosaur."

Let's hope he has a long tenure at the Somerville Theatre.
Posted by Jeff Rapsis at 12:16 PM