Take a right at the horses, then through the kitchen... 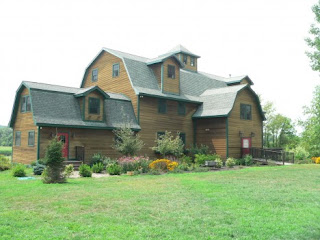 This past weekend was the occasion for what's quickly become one of my favorite silent film gigs: a mid-winter screening of silent films at the Gifford Barn at Liberty Ridge Farm in Schagticoke, N.Y. (The picture, obviously, was taken at some time other than the current winter, which has all of the northeastern U.S. completely snowbound.)

Last year, we trekked out to this picturesque recreational farm to present a show for the Giffords, who won my services in a charity raffle in Wilton, N.H. back in 2009. The Giffords elected to invite everyone in the area into the farm's function hall (a beautifully converted barn) for a mid-winter potluck supper and silent film show.

The first time, I had no idea what to expect, especially as we loaded in the synthesizer past the horse stall and through the kitchen. But as sometimes happens, everything came together wonderfully: the films, the music, and especially the reaction from the audience, which ranged from kids to senior citizens.

It went over so well, we were invited back this year, and so on Saturday, Feb. 5 we braved a three-hour drive through an ice storm out to upstate New York (about 20 miles north of Albany) to once again find the Gifford Barn packed with families eager for another dose of silent film magic. 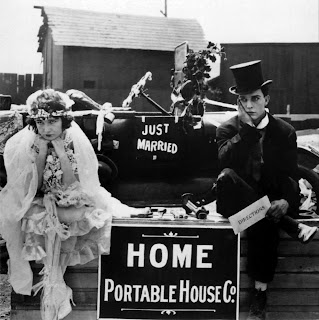 Reaction to the films, which included Keaton's "One Week," was simply explosive—especially so at that last gag, which still gets a scream after nearly a century. And dinner was great, too!

I can't say enough for Cynthia and Robert Gifford, and all the people who organize this event, and for those who turn out. It's just plain folks, and they all seem to appreciate the communal aspect of silent films as well as the general sense of bygone days and some of the more rural traditions evident in the movies: lots of horses and wagons, etc. As a nation, we were a little closer to the earth back in those days, and I've found small town folks seem to be drawn to that.

One guy came up to me afterwards with news that he had already seen the Keaton short. "I'm a carpenter," he said, by way of explanation. Another interesting reaction was from a middle-aged woman who recalled knowing Buster only through his appearances as an older man when she was a young girl. She was astonished to see him as a young man. Probably the most hearty endorsement came from an 81-year-old man, who, at the end of the show, cried it "It beats the hell out of television!"

The Giffords were kind enough to put us up in a local hotel, making it a nice way to spend a weekend. (Thanks to my mother for taking care of our three dogs.)

I look forward to a repeat engagement next year (I hope!), and the Giffords are talking about adding a silent film component to the farm's very busy autumn event schedule. We'll see!

P.S. Another interesting gig has just turned up. As part of this year's annual Boston Sci-Fi Film Festival (held every February), a 35mm print of "20,000 Leagues Under the Sea" (1916) is being screened twice, and looks like I'll be doing the score. Suddenly February has become a very busy month! More on that as details get nailed down.
Posted by Jeff Rapsis at 6:39 AM