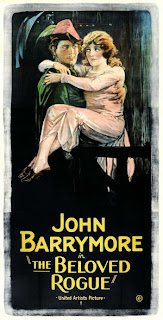 About two dozen folks were on hand on Monday, Feb. 7 for a screening of 'The Beloved Rogue' (1927) at the Palace Theatre in Manchester, N.H. Considering that the theater seats nearly 900, it might have seemed kinda empty, but for some reason it wasn't. (Maybe it was because everyone sat close together in the middle of the orchestra section.) Because any kind of an audience is essential to the silent film experience, I put the best spin on it I could: "Okay, so there are only 20 people here. That's 10 times better than two!"

I'd never played for 'The Beloved Rogue' before and was pleased to find out it's a true crowd-pleaser, with a lot of fun scenes that still hold up well today. Leading man John Barrymore, already by then known as "The Great Profile," was confident enough to indulge in mocking his own image, making his first appearance disfigured by an over-sized icicle hanging from his nose.

Shortly after, he topped that by allowing himself to be transformed into a full-on clown. My colleague Dave Stevenson, on hand for this one, felt that Barrymore's clown make-up was a dead ringer for that used by W.C. Fields, so he's wondering if Fields was on the set when that sequence was shot. Interesting.

Well, for the score, I had very little time to prepare anything elaborate, and I'd only watched the film once before, about a year ago, in deciding to program it. The day before the screening, I breezed through it again, mostly at fast forward speed, to remind myself of the overall shape of the picture. But that was it for prep. 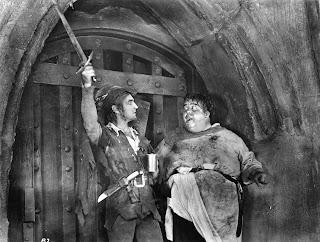 I DID have a couple of handy melodies on hand to use as leitmotifs—one built on a rising arpeggiated chord for Barrymore himself a la "Ein Heldenleben" of Strauss, and another raucous 6/8 jig-like figure for the "mayhem in the streets" sequences, and so things built pretty nicely just with these. The love scenes between Barrymore and costar Marceline Day went like a dream. Hey, sometimes it happens. Overall, the whole thing fell together in a way that was really quite satisfying, and got a lot of good questions and comments at the end.

Next up: two screenings of '7th Heaven' for Valentine's weekend and then a very crowded rest of February, with gigs in Kennebunk, Maine; Boston, Mass.; two in Manchester, and then it's out to the Kansas Silent Film Festival. Looking forward to it all!
Posted by Jeff Rapsis at 9:10 PM