Time travel may not be possible just yet, but yesterday (Sunday, Feb. 20) I did the nearest thing to it. At 2 p.m., I played a score for the 1916 version of '20,000 Leagues Under the Sea' before about 500 people as part of the 36th annual Boston Science Fiction Film Marathon. And then, at 6:30 p.m., I played music for Harold Lloyd's 1926 feature 'For Heaven's Sake' in a church hall in Manchester, N.H. after a service and pot luck supper.

Well, it wasn't time travel, but surely some kind of massive environmental swing. How else can you characterize going from a theater filled with good-natured but rowdy sci-fi junkies (many armed with ray guns) in Somerville, Mass. to a quiet and respectful church group on a side street in New Hampshire? And from a futuristic film based on the visions of Jules Verne to a sweet romantic story about a rich man and a preacher's daughter?

Though both films are from another era, they each presented very different challenges for scoring, especially when performed within hours. For '20,000 Leagues,' given the setting (a 24-hour science fiction marathon that is still going on as I write this), I felt free to push the digital synthesizer into fairly exotic territory for me. Virtually the entire score was made up of patches taken from the "world music" category, with rumbling pitched gongs and melodic lines played by calliope-like flute settings that seemed to bridge the gap between then and now.

Though I'm never quite satisfied with what I do, I was actually quite pleased with the music for the long underwater sequences: as on the Thursday before, it took the form of an extended tribute to Philip Glass. The synth setting was a preprogrammed one called "Trip to Bali" something-or-other; when the percussion rhythm was turned off, it created a wonderfully rich "crystalline" sound in the higher registers which to me seemed just perfect for the underwater scenes as I cycled through different keys to keep a sense of forward motion going.

The nicest thing about the whole experience was how the audience was with the film the entire way. Yes, it was treated as camp, but at the same time there was a level of celebration of the film's pioneering achievements mixed in with it. But as good as the film print was (though, alas, it was missing the octopus or squid scene!), and as good as the theater was, and as much as I may have been in the zone, it was the audience that made it.

Which kinda makes sense, when you think of it. It was 500 science fiction fans in a theater for a 24-hour cinematic adventure, and '20,000' was the second film on the program, so they were all pretty stoked. I mean, where else would Jules Verne get a raucous impromptu cheer in a film's opening titles?

Anyway, I really didn't know what to expect going into this, but it made for one of the best silent film music experiences I've had yet in this adventure. I have to thank Jemi Broussard and Garen Daly for giving me the chance to do this on short notice, and for the chance to meet folks such as Dave the projectionist and Ian Judge, the theater's manager, who it turns out is a protogee of Larry Benaquist at Keene State College. Small world!

Ian and I chatted a bit about doing more silent film there, and I hope it's possible. They have the Alloy Orchestra doing 'Metropolis' on March 5, and I hope to make it down for that, but for me it would probably be something on a smaller scale in one of their screening rooms. We'll see.

And then, once '20,000 Leagues' was over, we had just enough time to hurriedly load all the gear into the car and high-tail it out of Boston and up to Manchester. There, the screening of 'For Heaven's Sake' commenced at 6:30 p.m. at Grace Episcopal Church, following a pot luck supper held by the outreach committee. It was another good experience, but so different in character from what transpired in Boston just a short time before that it was actually difficult to adjust. 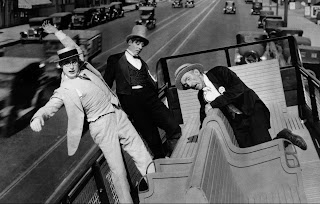 'For Heaven's Sake' was the last major Lloyd I had left to do in live performance. (Oh wait, I still haven't done 'Hot Water.') It has a reputation as one of his thinner efforts, and I can see why, but I was still eager to see what kind of crowd reaction it got. The verdict: big laughs in the 'cake-eating' scene, and for some of the titles, which seem a little verbose for my tastes. Not so much for Harold's efforts at rounding up hoodlums to attend church, but things perked up again when the guy pulled the pearls out of his mouth while Harold was taking up the collection.

I'm afraid I started ramping up too early on the final "race to the wedding" sequence and may have killed some of the impact, but this is a tough one because Harold has already called Jobyna on the phone and she's totally aware he's coming, so there's nothing like the suspense of the "race to the finish" climaxes in 'Girl Shy' (where she's about to marry the wrong man) or 'Speedy' (where Pops is about to lose the streetcar franchise). But at the same time, 'Safety Last' manages to create intense suspense during Harold's climb despite the audience having no doubt about Mildred's affection for him. (Maybe the fact that he was pretending to be a store executive could have created the energy, though.)

If I was brought on as a story consultant on 'For Heaven's Sake,' I'd have told Harold that what would have made the climax of the film more effective was for him to somehow be in danger of losing his fortune. This would not only have created suspense, but would have also put him in the position of making choices of character in which he is shown committing to love over money. And of course he winds up getting his fortune back in some way, which is icing on the cake. But I wasn't around in 1926, so it's a little late to be offering this advice.

Anyway, my thanks to Sharon Ruatto of Grace Episcopal Church, who won me in an auction held awhile back by the Manchester Community Music School, where I'm on the board of directors. And thanks to Suzanne Lloyd out in California for permission to show this film to an audience of newly minted Harold Lloyd fans.
Posted by Jeff Rapsis at 8:37 AM