Well, that's one way of putting it. But yes, on Thursday, April 28, I had the privilege to do music for a screening of the original silent 'Ben Hur' (1925) the Chapel of Mary at Stonehill College in Easton, Mass., a liberal arts college just south of Boston. 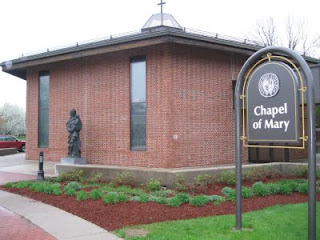 Screening a film in a Catholic church opens up a whole new level of potential faux pas, even with seven years of altar boy experience way back when. F'rinstance, suggesting that we set up the projector on the altar led to a discussion about sacrilege, so I demurred. With so many variables present at a silent film screening, you don't want God against you.

The screening was organized by a freshman, Dan Tierney, Class of 2014 (what?) as part of an honors project to bring cultural events to the campus. Dan and several classmates were there when I arrived, all eager to help with set up. Because my vintage half-century-old screen looked so small in the chapel, they rustled up a much larger (and newer) one from the church's AV equipment that really made a difference. Thanks! 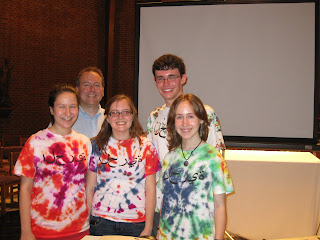 Here's a picture of us after the screening. From left, it's Gabrielle Cole, me, Kristen Devoid, Daniel Tierney, and Victoria Sidoti. They're all freshmen, Class of 2014, while I claim membership in Fordham University's now-prehistoric Class of 1986. (That's the altar behind the screen there.)

Try as I might to avoid offending God, for the first time ever I could not get the digital projector to read a signal from the DVD player. Worked it over and over and could not get a picture! Finally, with 20 minutes to showtime, I sent one of Dan's friends to find an alternate DVD player to see if that might cure things.

While that was happening, I realized that the last time we used this projector, the input was from a house system, and so the usual input settings had been messed with. As soon as I switched the input back, the picture came right up, thus preventing me from having to act out the 'Ben Hur' story on my own.

At that point, few people were on hand. Even Dan and a couple of his pals had to go to band practice, and would miss the beginning of the film. So I expected a small turnout and was just looking forward to bringing the picture to life. I sat down and improvised some church-y stuff to warm up, and got so absorbed that I didn't notice that people were arriving behind me.

By the time I finished, I got up and turned around to find a fairly sizable crowd on hand—maybe about 60 people, mostly students but some full-fledged adults, too. "Wow, there's an audience!" I exclaimed. With the film running two-and-a-half hours, we got started right away.

And the audience itself was really interesting. A show of hands revealed that most had never seen a silent film before, and absolutely no one had ever seen 'Ben Hur.' So there was an adjustment period, where I imagine some of what was on screen was so foreign to a young person's sensibilities that the only natural response would be laughter. And we got a lot of that. 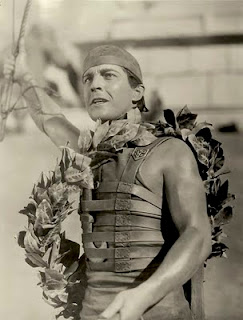 At first I was worried it might kill the film and prevent it from being taken seriously or casting its spell. And though the "laughter" reaction never really disappeared, it gradually morphed into a completely engaged audience. It was one that made a lot of noise throughout the film, which I didn't have a problem with, but which almost led me down some wrong paths musically as I tried to work with this.

To wit: One mistake I discovered I was making was to try to enhance the film's gravity by pouring on the volume and complexity. But I found that only caused the chatter to increase. But when I quieted down or even stopped to punctuate a dramatic moment, it had the effect of stopping the chatter and galvanizing the audience. Interesting dynamic to play with.

Scoring the scenes with Jesus (where we don't see him but only his hands, and people's reactions to him) was especially challenging because there was a component of the audience that found all of these scenes totally hilarious. I did my best to keep it grounded, but still, it was nice to see a little skepticism at a Catholic campus. 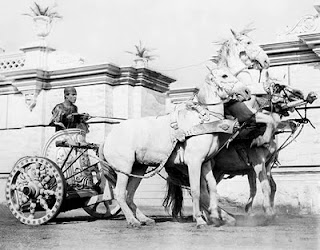 In the end, what made it for me was that genuine emotion was present at key moments, especially the chariot race and also when the family is reunited right near the end. The film got a big chorus of cheers at both points, and it felt cathartic and the music just flowed so naturally through it all, riding the wave of emotion that bounced through the room. Nice!

Thanks very much to all the folks at Stonehill College for a wonderfully vibrant silent film experience. It was an honor to present 'Ben Hur' and I hope we can do more films there very soon! Can you imagine Keaton's 'College' or Lloyd's 'The Freshman' in such a setting?
Posted by Jeff Rapsis at 5:39 PM