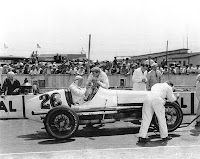 Played for a fun 'auto racing' screening this afternoon (Sunday, May 29) at the Wilton (N.H.) Town Hall Theatre. Films in honor of the 100th running of the Indy 500: Chaplin's 'Kid Auto Races at Venice' (1914), the hyperkinetic Sennett comedy 'Lizzies of the Field' (1924) starring Billy Bevan, and 'Speedway' (1929), the late MGM drama starring William Haines and Anita Page.

Not a huge crowd, but what can you expect in the middle of a beautiful Memorial Day weekend in this part of the world? Better than I thought we'd get. "Greetings, racing fans!" I shouted after the opening fanfare. Why not? by virtue of some press in the local papers, we actually did get a few motorheads who wanted to check out the cars. I was told afterwards that the 'Speedway' scenes filmed at the Indy 500 track are a "priceless record" to those in the know.

I don't know about racecars, but I think 'Speedway' is a good film for music, not only because of all the racetrack (and airplane!) action, but also because I think it can help an audience today read the characters a little more clearly. Music can help convey a sense of the existing relationships in this run-of-the-mill film, which aren't very clear at the start.

For instance, at first you're not quite sure of the William Haines/Ernest Torrance thing -- it is boss/employee or father/son or something else? Warm music underscoring helps this relationship make sense right from the start.

I love the greasy spoon scene where Haines first meets Anita Page, and they end up outside in a frenzied hat exchange. Haines really sells the "conceited ass" character here, and at the same time is engaging enough for Page (and us) to find him likeable despite his antics. For music, I used an innocuous-sounding soft-shoe melody that I hope helped the scene flow, and punctuated the reactions to each other and to the harried waitress, Polly Moran.

The final extended race is a challenge because of the emotional line that's carried through from the start -- the Haines character gets bumped right before the flag, and spends much of the race going through a transformation that eventually puts him in a position to save the day. So you have to alternate from intense track scenes to intense emotional scenes, and do it in a way that keeps it all stoked.

What helped was I had a signature for the Haines character that could take many forms depending on how it's played, and it happened to fit well in the texture of the "exciting race" music, so during the race scenes I was able to weave the Haines theme into it whenever it cut back to him.

One thing I really liked is how they showed the warm-up lap of the race, prior to the official start, with the cars gradually revving up to higher and higher speeds before the flag is waved. What a great chance to start majestically and work gradually up to a faster and faster tempo. Corny, but simple and effective.

In the "I didn't know that!" department, while reading up on 'Speedway,' I learned that Anita Page received several marriage proposals in the mail from Benito Mussolini, and that very late in life (when she was in her 90s!) she returned to the screen in a series of roles in low-budget horror films. Gotta get me some of that!

Looking ahead: June sees a lot of Buster Keaton coming up. Sunday, June 5 at 7 p.m. is 'Our Hospitality' (1923), the first in our summer Keaton series at the Somerville (Mass.) Theatre in Davis Square. We're showing it in 35mm, along with the shorts 'One Week' and 'The Scarecrow,' all courtesy Tim Lanza and the Douris Corp. Really looking forward to this! And later, we're screening 'The General' (1926) in Plymouth N.H.; Ogunquit, Maine; and in Brandon, Vermont, where it's part of a day honoring the town's Civil War connection. (It was a big stop on the Underground Railroad, among other things.)

For a full schedule and all the details, check out the "Upcoming Screenings" page on this blog. Thanks!
Posted by Jeff Rapsis at 11:02 PM