Look out! It's Rin Tin Tin this month! 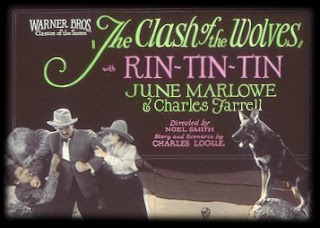 Coming up this month is the first in my silent film "road show" programs, where I take a film or two and go around to theaters in northern New England. First up is Rin Tin Tin, in a double feature made up of 'Clash of the Wolves' (1925) and 'Lighthouse by the Sea' (1924). I'm playing this program on Thursday, May 12 in Plymouth, N.H. (see press release below), and then later this month in Brandon, Vt. and possibly at the Leavitt Theatre in Ogunquit, Maine, if the summer-only theater is indeed open by then.

These action-packed films are fun to play for. I already have a main 'Rin Tin Tin' melody, so we'll be hearing that quite a bit, plus some other stuff for each film. The 'Lighthouse' film is set in a kind of idealized coastal Maine, so I'm looking forward to see how that plays in Ogunquit.

Press release? I'm glad you asked! Here it is for the double feature set for Thursday, May 12 at 7 p.m. the Flying Monkey Moviehouse and Performance Center at Plymouth, N.H.

Rin Tin Tin returns to the big screen on Thursday, May 12

PLYMOUTH, N.H.—He was Hollywood's original canine hero, a photogenic German shepherd who rose to big screen fame in the 1920s. He not only rescued his human co-actors, but his pictures proved so successful they rescued Warner Bros. studios as well. He was Rin Tin Tin, and two of his best starring silent pictures will be shown in a double feature on Thursday, May 12 at the Flying Monkey Moviehouse and Performance Center in Plymouth, N.H. The show, accompanied by live music, starts at 7 p.m. Admission is $5 per person. 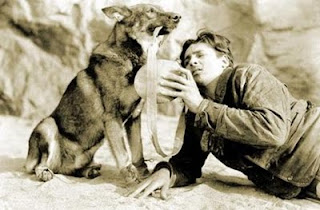 The two Rin Tin Tin films, 'Clash of the Wolves' (1925) and 'Lighthouse by the Sea' (1924) will be accompanied by live music by local composer Jeff Rapsis. Dinner is also available for patrons who arrive early at the Flying Monkey, 39 South Main St., Plymouth, N.H. For more information, call (603) 536-2551 or visit www.flyingmonkeynh.com.

Rin Tin Tin was in the vanguard of canine motion picture megastars whose exploits thrilled early movie-goers. The original Rin Tin Tin was a puppy who in 1918 was rescued from a bombed-out kennel in Germany. He was named for a puppet called 'Rin Tin Tin' that French children gave to American soldiers for good luck.

U.S. Army Corporal Lee Duncan brought Rin Tin Tin to America and trained him, then got him into the then-new field of motion pictures. Rin Tin Tin, with his dashing looks, athletic prowess, and acting talents, starred in a total of 26 adventure films for Warner Bros.

Rin Tin Tin died in 1932, but his offspring continued to star in films and television shows for several generations.

The two films programmed at the Flying Monkey's double feature show the original Rin Tin Tin at the height of his popularity. They also show the dog's versatility, as they take place in two very different settings, and each makes unique demands on the canine star. 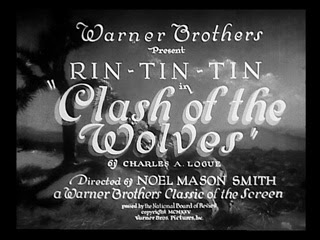 'Clash of the Wolves' (1925), set in the old West, has Rin Tin Tin portraying Lobo, a half-wolf and untamed leader of a wild pack menacing a small town. When Rin Tin Tin is injured and then rescued by a stranger, the stage is set for a dramatic showdown with the townspeople and a run-in with a claim jumper. 'Lighthouse by the Sea' (1924) sees Rin Tin Tin playing a castaway from a shipwreck off the coast of Maine who gets washed ashore, where he plays a key role in an aging and nearly blind lighthouse keeper's battle to keep his job, and in foiling efforts of rumrunners offshore.

Both films are packed with action and adventure and were made at a time when the movies were first learning to tell stories in cinematic terms. They hold up surprisingly well today, especially if the right conditions are present for silent film to be seen at its best: good restored prints shown at the correct speed, a big screen, live music, and an audience.

The Rin Tin Tin double feature is the latest in a series of monthly silent film screenings at the newly renovated Flying Monkey Moviehouse and Performing Arts Center. The series aims to recreate the lost magic of early cinema by reviving the elements needed for silent film to be seen at its best: superior films in best available prints; projection on the big screen; live musical accompaniment; and a live audience.