'Rin Tin Tin' does the trick in Brandon, Vt.

Well, he did many tricks, chief of which was to get a crowd of about 50 people hooting and hollering for him as he saved the day in not one but two separate films. 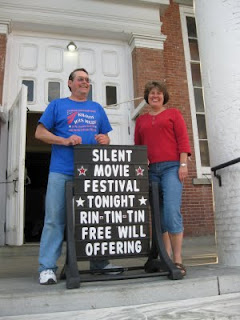 The audience was on hand at Brandon Town Hall, home to a monthly summertime silent film series that kicked off on Saturday, May 21 with a Rinty double feature: 'Clash of the Wolves' (1925) and 'Lighthouse by the Sea,' both action-packed dog dramas that show the silent screen's canine hero at his best. That's a picture of organizers Dennis Marden and Mei Mei Brown outside the town hall.

Dennis and Mei Mei, and so many others in Brandon, work to keep the town hall activity calendar filled, and the aim is to continue to restore this landmark building so that it becomes a full participant in the town's cultural life. This year is the building's 150th birthday, and it's also the 250th anniversary of the town's founding. So it's a big year for the community, and I'm so glad that silent film is a part of what's happening.

Saturday's Rin Tin Tin double feature was an unusual screening for me because of something that happened earlier. Before the show, Nina Keck of Vermont Public Radio came by to interview me and record some music for a piece she's working on. (Thank you!) She's a very nice person and I enjoyed talking with her. But for some reason, I couldn't put together brief and cogent answers to her questions, and instead rambled on and got sidetracked with subpoints and so on. Well, sometimes that happened.

And when it came time for the music part of the interview, I really couldn't get it together. It's something to do with not having an onscreen image to play for, I think, and also because what happens cold is not the same as what happens 90 minutes into a film, when I'm deep in my movie score trance. But I was also just nervous because I knew it was being recorded, and also I knew I had two films to play in just a little while, so my mind was a little preoccupied.

Anyway, the point is, the whole experience threw me. (Nina, if you come across this, don't worry--it wasn't you.) So the music for 'Clash of the Wolves' didn't jell except sporadically, and for 'Lighthouse by the Sea,' I pretty much went dry, trying out different themes and discarding them as we went.

We got through the films and people seemed to enjoy them, but for me it was the same pattern. In screenings where I can concentrate on the music, it seems to come together. But with those where there's some unexpected distraction (and that's more often than not, alas), it really seem to affect the process. I think it's a peculiarity with me, and I wish I could overcome it. With so many issues to consider, more often than not some kind of troubleshooting is necessary. I'll just have to keep working on it.

I think the lesson is that if I need to do interviews, it really shouldn't be right before a screening. Afterwards, maybe. (Sometimes I'm even less coherent after finishing a program.) Off-day, sure. But right before, it just doesn't seem to work.

On the plus side, there were quite a few good moments in both films, and the audience did not hesitate to cheer on Rin Tin Tin and his various human allies at their big moments. Amazing, the magic these films still have. I really look forward to the next films we're doing in Brandon: Keaton's 'The General' (1926) in June to coincide with the town's 'Civil War Days,' and then in July a double bill of 'Tol'able David' (1921) and 'Hell's Hinges' (1918), a William S. Hart western.

See you in Brandon!
Posted by Jeff Rapsis at 2:00 PM