Vrrrooom! 'Speedway' on Sunday, May 29 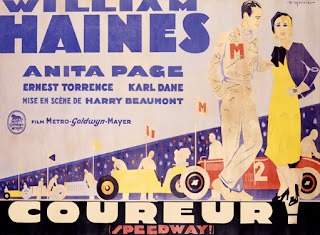 My opinion: Auto racing may or not be a sport. But 'Speedway' (1929), filmed on location at the Indy 500 track, is certainly one full-throttle revved-up fasten-your-seat-belts movie.

And as this year marks the 100th anniversary of the Indy 500, why not pay homage to this great American tradition by screening a silent film that showcases the event in all its vintage glory?

And that's what we'll do on Sunday, May 29 at 4:30 p.m. at the Wilton Town Hall Theatre in Wilton, N.H. Hope you can join us, though apparently the screening is scheduled for right smack in the middle of when this year's race will be in progress. Ooops! Hey, but you can Tivo that, right?

This film is a wonderful look at a sport that's changed quite a bit in the ensuing 80 years, but still boils down to "men and machines battling for glory," to quote the film's tag line.

I do hesitate to think of auto racing a "sport." To me, a sport is something that requires you to exert yourself physically in more overt ways than sitting behind the wheel. Yes, I know driving 500 miles on a track is a supreme test of endurance, but to my mind it lacks the man-on-the-field simplicity that makes for great athletics. My attitude has always been that driving a race car is as much a sport as, say, running a convenience store.

But you don't have to love racing to enjoy 'Speedway,' a real rip-roaring blast from the past. Plus it has airplanes in it, too! Those movie folks, what will they think of next?

WILTON, N.H.—Fasten your seat belts! The Wilton (N.H.) Town Hall Theater celebrates this year's 100th anniversary of the Indianapolis 500 by screening a vintage racecar drama. 'Speedway,' a 1929 movie starring William Haines and Anita Page, was filmed on location on the Indy 500 track more than 80 years ago. The picture, promoted as “men and machines battling for glory at 115 mph,” is filled with scenes of vintage racecars and cameo appearances by the top drivers of the era. 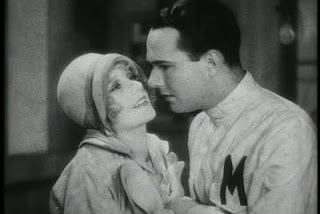 The silent film will be shown with original music performed live by accompanist Jeff Rapsis. The screening is at the Wilton Town Hall Theatre, Main Street, in Wilton, N.H. on Sunday, May 29 at 4:30 p.m. Admission is free; donations are accepted.

"We felt this was a great way to pay homage to a great American tradition," said Dennis Markaverich of the Wilton Town Hall Theatre. "This film is a real hoot, featuring great historic scenes of the Indy 500 track. Showing this rarely seen movie on the big screen and with live music will bring it back to life for today's audiences, which is what our silent film series is all about."

The Indianapolis 500, one of auto racing's oldest traditions, was first run in 1911, when the automobile was still in its infancy. By the 1920s, the race had already been enshrined as an annual highlight of the auto calendar, with drivers and manufacturers showcasing their talents in what had become the nation's premier automotive endurance race.

That excitement is captured in 'Speedway' (1929), one of the last silent films released by MGM. 'Speedyway' is the story of a racecar mechanic (Haines) who woos Anita Page, the daughter of an airplane manufacturer, and eventually gets the chance to drive a racecar himself in the Indianapolis 500. The film features exciting location footage shot at the real Indy 500 and numerous cameos of racing stars of the day.

Haines was a famous star of the silent screen and early talkie period who was near the peak of his commercial popularity here; soon he would be named the No. 1 male box-office draw in the country. Haines was getting bored with acting, however, and was already starting to transition to a new career as an interior decorator, a field in which he would find lasting success and a fame equal to that of his stardom. Haines went on to decorate homes of many top Hollywood figures including numerous movie stars.

Haines, a homosexual, left acting in 1934 for good when he refused studio orders to marry a woman to improve his public image. He was among the first gay actors to stand up to immense studio pressure to lead a life deemed acceptable to the movie-going public, a stand which cost him his big screen career.

'Speedway' is the latest in a series of monthly silent film screenings at the Wilton Town Hall Theatre. The series aims to recreate the lost magic of early cinema by reviving the elements needed for silent film to be seen at its best: superior films in best available prints; projection on the big screen; live musical accompaniment; and a large audience.

“These films are exciting experiences if you can show them as they were intended to be screened,” said Rapsis, accompanist for the screenings. “There’s a reason people first fell in love with the movies, and we hope to recreate that experience. At their best, silent films were communal experiences, designed from the ground up to be seen in theaters with live music and a big audience, which intensifies everyone's reactions.”

For each film, Rapsis improvises a musical score using original themes created beforehand. None of the the music is written down; instead, the score evolves in real time based on audience reaction and the overall mood as the movie is screened.

‘Speedway’ will be shown on Sunday, May 29 at 4:30 p.m. at the Wilton Town Hall Theatre, Main Street, Wilton, N.H. N.Admission is free, with donations accepted to defray costs. For more info, call (603) 654-3456 or visit www.wiltontownhalltheatre.com.