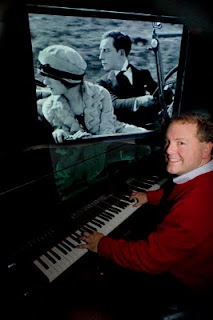 Oh my God, it's finally happened. I've stooped so low as to put out a press release about...myself. But I felt it was time to do something to try to stir up some excitement for our 35mm screenings of Keaton features this summer at the Somerville Theatre in Somerville, Mass. They're terrific chances to see Keaton's films in the best 35mm prints available, and in a theater where they really know how to handle 35mm black-and-white on the big screen. I'd probably be going down even if I weren't doing the music. But for now, despite this self-serving release, let me assure everyone that it's still all about supporting great films, not about me. Really. Really!

SOMERVILLE, Mass. — Taking his place to play the score for a classic silent film, there's a reason accompanist Jeff Rapsis has no sheet music on his keyboard. It's because he's making up the music right there on the spot.

And it's not rinky-tink piano accompaniment, either. Rapsis, a New Hampshire-based musician and composer, uses a digital synthesizer to recreate the texture of the full orchestra, complete with pounding drums and clashing cymbals, all produced in real time by a traditional keyboard with 88 keys.

The goal is to create a movie score that brings to life classics from Hollywood's silent era—the films that caused audiences to first fall in love with the movies.

"These films retain a lot of their magic over audiences if you show them under the right conditions," said Rapsis, 47, of Bedford, N.H. "Good restored prints projected on the big screen, with a large audience and with live music—all those elements contribute to making silent film a unique experience, and different from anything you're likely to see in a multiplex today."

Rapsis currently provides the music for the monthly silent film series at the Somerville Theatre in Davis Square, which this summer is showcasings the timeless work of comedian Buster Keaton. All films are shown in the best available 35mm prints, increasingly a rarity as many theaters convert to digital projection. The next screening in the series is Keaton's feature 'Seven Chances' (1925), to be shown on Sunday, July 10 at 7 p.m. Admission to the show, which includes two Keaton comedy shorts, is $12 adults / $8 students/seniors.

Based on a Broadway play, 'Seven Chances' finds Keaton with just seven hours to get married or lose an inherited fortune. For the music, Rapsis will draw from material he's developed for prior screenings of the film—a main melody and several chord sequences useful in telling the story, plus familiar wedding music to underscore the comedy. But the score itself will come only at showtime, when the lights go down and the opening titles appear.

"It's kind of a high wire act to do the music this way. But it provides an energy and excitement that contributes to the experience," said Rapsis, who prepares minimally for each screening. "For a film I don't know, I'll run through it once or twice on DVD prior to the public screening, to make sure I understand the story's arc and any big moments. Any more than that, and I find a movie begins to get too familiar, and I find I start to overthink the film or anticipate things during the screening, and that gets in the way of things flowing in the theater."

Once a film is underway, Rapsis plays continuously, providing music that underscores what's onscreen—not just the action, but emotional shifts and plot twists that can often build to powerful climaxes. He provides full orchestral scores for dramas, westerns, action/adventure films, and horror flicks, all of which first became popular as the silent film era peaked in the 1920s.

"Comedies are often the hardest to do well because timing is so important, and often less is more," Rapsis said. "It's important not to overpower what's on the screen, which can keep audience members from hearing each other react. These films were built for audience reaction, and being swept along by the crowd is one of the great things about silent film. And I find I can best go with that flow if I'm with them and responding to the film, and not buried in sheet music."

Silent film programs can last anywhere from one to three hours in length. Rapsis finds that after the first 10 or 20 minutes, he sinks into a state of mind where he is completely absorbed by the process of scoring the movie, and the music sometimes seems to weave itself as he responds to the film in real time.

"At it's best, creating music in real time is a grand journey into the subconscious," he said. "Once I get 'in the zone,' I'm not aware of time passing, though part of me is always conscious of what's on screen, what's likely to happen next, and what the audience reaction may be. And I adjust as I go—to help a film 'grab' a restless audience at a big moment, sometimes it helps to stop playing for a bit, which really punctuates the drama."

Rapsis, a newspaper publisher by day, is a lifelong silent film fan who studied classical piano separately. He began to accompany silent film screenings only in 2005, after composing the score for an independent feature film, 'Dangerous Crosswinds,' directed by New Hampshire filmmaker Bill Millios.

"It's kind of a lost art, but once I tried doing it, I found I could naturally come up with music that helped silent films come to life," Rapsis said. "And I really enjoyed the process because it combined two things I really loved: silent film and music. For me, it was like putting chocolate and peanut butter together. And I never had time to prepare anything elaborate in advance, so that led me down the improv path."

Improvisation was once a key element of music, not just in silent film scores but also in many other eras. Composers such as Beethoven and Mozart would often improvise cadenzas to their piano concertos, and would sometimes pit their keyboard virtuosity against other performers in concerts. Today, improvisation is being reintroduced to classical music as a way to bring new life to the field.

Although he uses a modern digital synthesizer, Rapsis creates music that maintains a traditional "movie score" orchestral sound. His music, however, differs from what audiences might have heard in the 1920s.

"You have to remember that audiences today have several generations of film music in their head," Rapsis said. "There's that shower scene in Hitchcock's 'Psycho,' for example, with composer Bernard Herrmann's dissonant high strings squealing away to create a sense of terror. So while I maintain a traditional sound, I try to use that wide-ranging musical vocabulary to help make silent films work for modern audiences."

In recent years, Rapsis has pursued his silent film music passion at screenings throughout New England and beyond. In addition to his work at the Somerville Theatre, he's currently supplying music for monthly screenings at theaters in Wilton and Plymouth, N.H.; Brandon, Vt., and Ogunquit, Maine. He has accompanied silent films at the New York Public Library and the Kansas Silent Film Festival; in 2012, he's been invited to play music at Cinefest in Syracuse, N.Y., one of the nation's most prestigious vintage film festivals.

At each performance, he actively solicits audience input, both for feedback on his work and for ideas of what films people would like to see.

"I have comment cards and they're very useful in evaluating how I'm doing," he said. "The comments range from very supportive to curt remarks such as 'Music Too Loud,' which is actually important for me to know because during a performance, I'm never quite sure how it's coming across."

After a screening of Keaton's feature 'Our Hospitality' at the Somerville Theatre in June, critic Jay Seaver of efilmcritic.com wrote of Rapsis: "He was really impressive tonight—his music for the prologue to 'Our Hospitality' was especially terrific, and I'm sure my musical brothers will tell me that playing to fast-paced movies for two hours straight (no break between films), at least partly improvising, is difficult, and he did an excellent job."

"I joke that I've finally found my artistic niche—collaborating with dead people," he says.

Admission for all silent film screenings in the series is $12 adults, $8 students/seniors. The Somervillle Theater is located at 55 Davis Square, Somerville, Mass. For more information, call (617) 625-5700 or visit http://www.somervilletheatreonline.com.

For more information on Rapsis and a current list of upcoming screenings, visit www.jeffrapsis.com.