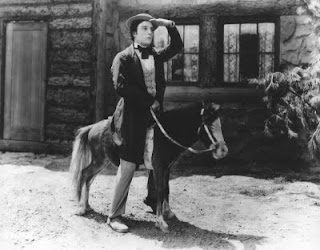 A look at the calendar shows not one but two big Buster Keaton screenings coming up. On Sunday, July 31 at the Wilton (N.H.) Town Hall Theatre, I'm accompanying 'Our Hospitality' (1923) as part of our "Summer Love" series exploring the films of the Talmadge sisters. 'Our Hospitality' is the only film to feature Natalie Talmadge, Buster's wife, in a leading role, so including it was a natural. We're also running two Keaton shorts that I've never played in Wilton: 'The Playhouse' (1921) and 'My Wife's Relations' (1921). Showtime is 4:30 p.m. and admission is by donation; hope to see you there! 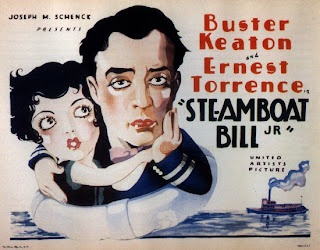 If you'd like more info, here's the press release...

SOMERVILLE, Mass.—Silent film returns to the big screen at the Somerville Theatre in August with a program of classic Buster Keaton comedies accompanied by live music.

The screening, on Sunday, Aug. at 7 p.m. at the Somerville Theatre, 55 Davis Square, Somerville, Mass., will include Keaton’s classic feature film ‘Steamboat Bill Jr.’ (1928) as well as two short comedies, ‘The High Sign’ and ‘Cops.’ General admission is $12 per person, $8 for students/seniors.

All movies will be shown in rare 35mm prints and with live music provided by New Hampshire-based silent film accompanist Jeff Rapsis.

'Steamboat Bill Jr.' finds Buster cast as the bumbling son of a rundown riverboat’s rough captain. When a rival brings a newer boat to town, the family is forced to face competition, just as Buster is forced to ride out a cyclone threatening to destroy the community. The film includes the famous shot of an entire building front collapsing on Keaton, who is spared by a conveniently placed second-story window.

'Steamboat Bill Jr.,' widely regarded as one of Buster's best, was the comedian's last independent feature before signing with MGM studios, where he lost creative control over his work and his filmmaking career began a long decline.

‘The High Sign’ (1921) and ‘Cops’ (1922) rank among Keaton’s best short comedies, made shortly before he made the leap into full-length feature film production. Both films are highlighted by extensive physical stunt work by Keaton, with ‘Cops’ often singled out as a masterpiece of short film comedy.

Keaton, who grew up performing with the family vaudeville act, was known for never smiling on camera, an important element of his comic identity. A trained acrobat who learned at an early age how to take a fall, Keaton was also famous for doing all his own stunts on camera in the era before post-production special effects became common.

Critics continue to hail Keaton’s timeless comedy as well as his intuitive filmmaking genius. In 2002, Roger Ebert wrote of Keaton that “in an extraordinary period from 1920 to 1929, he worked without interruption on a series of films that make him, arguably, the greatest actor-director in the history of the movies.” Keaton, who never attended school, did not think of himself as an artist but as an entertainer using the new medium of motion pictures to tell stories and create laughter.

The Somerville Theatre’s commitment to 35mm film presentation in both contemporary and classic movies means a rare chance to see Keaton’s work in its original format, in the best available prints.

“This show is a great opportunity to experience silent film as it was intended to be shown -- on the big screen, in high-quality prints, with live music and with an audience,” said Ian Judge, the Somerville Theatre’s general manager. “With so many theaters converting to digital, we’re pleased to continue to present films in 35mm, the standard format for more than a century. There’s nothing like it, and that’s especially true for films of the silent era.”

Music for the Keaton screenings will be performed by Jeff Rapsis, a New Hampshire-based musician who accompanies silent film screenings at venues across New England. Rapsis works without sheet music, instead creating an improvised score on the spot. He uses a digital synthesizer that reproduces the texture of the full orchestra, creating a traditional "movie score" sound and helping link today’s audiences to films of the silent era.

In creating an improvised score, Rapsis tries to use music to amplify audience reaction, a key element of the silent film experience.

“These films were not meant to be seen by people alone or at home,” Rapsis said. “They were created to be experienced by large crowds in a theater like the Somerville, and getting swept up in the audience reaction is one of the great things about silent film. When it happens, either in a comedy or drama or any kind of film, it can be almost cathartic.”