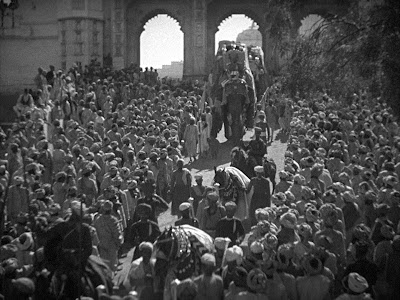 We ran the proto-Bollywood silent epic 'A Throw of Dice' (1929) this afternoon for an audience of about 50 people at the Wilton (N.H.) Town Hall Theatre. First time I've done this film, but won't be the last, as it holds up very well and has a lot of interest for contemporary audiences, I think.

The score was built out of materials that I hoped help tell the story and signal shifts in mood or "between the lines" stuff. (That's a funny term to use for a silent film, but I can't think of a better way to put it.) So I had a two-part fanfare (statement and response style) for the good prince, a minor key melody for the bad prince, a tune for the gal they both loved, and a motif for gambling, which itself plays a big role in the story. (Not surprising, given the film's title.)

Other stuff happened here and there for other characters, and a scene that features "jugglers" (the film's all-purpose term for court entertainers) resulted in some unplanned carnival-like music that stood in stark contrast to the mostly-Asian-sounding scales I used otherwise. I actually liked this, as it seemed refreshing and came just when the film needed it. 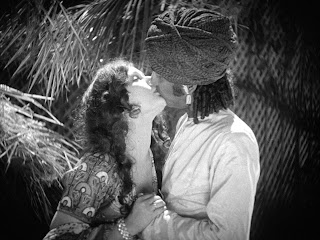 The strategy to use music to help the audience tell the princes apart (outlined in an earlier post) seems to have worked. But I was a little late on some cues and several things didn't work as planned. Funny the stuff that people remember, though. One of the synthesizer settings I used a lot is a mix that includes bird tweeting sounds to give it an "untamed jungle" flavor. I happened to be using it at the very end, and afterwards several people complemented me on the use of the bird calls for the final shot. I guess that's the kind of thing that sticks with people.

Taking a breather now before hitting the road this weekend with 'Tol'able David' and 'Hell's Hinges' in Brandon, Vt. and Ogunquit, Maine. Will brush up Thursday or Friday, just to make sure I handle the cross-cutting in 'David' so that the film's finale holds together like it should. Otherwise, it's off to the movies!