One of the best screenings ever! 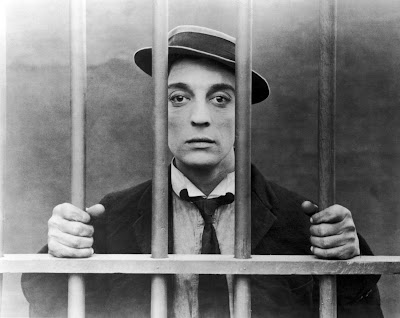 Well, I can say this about too much of a good thing—it doesn't seem to be doing me any harm.

That's what I thought last night (Sunday, July 10), while doing music for a Buster Keaton program in 35mm at the Somerville (Mass.) Theater, in Davis Square just outside downtown Boston. It was really that good.

The Somerville stages these monthly events in their main venue, a vintage 1914 theater with a balcony, real curtains, and a huge screen. It's a great place to watch a movie, especially an older movie, because they're dedicated to the 35mm format, and they take incredible pains to do it right.

Consider this excerpt from an e-mail prior to the show from David Kornfeld, the theater's head projectionist and an absolute fanatic about his craft:

"KEATON MOVIES. Continuing our silent series with live accompaniment by Jeff Rapsis, we'll be running two shorts & a feature. Just got through inspecting these, and, great news, they are all 1.33 prints. Wow.
NEIGHBORS. This is a gob-smacking print: just gorgeous. Terrific density, sharp as a pin. Best print of this I've ever seen, and I've run many.
THE GOAT. Not quite as good. This is a more recently struck print, and has more contrast & less tonal range than the other. In excellent shape, though, and should look good on screen.
SEVEN CHANCES. Even more recently struck, with the problems inherent in B&W processing these days. The density varies: at times good, & at times okay; but it is thinner than it should be overall. There are abrasion scratches on the emulsion side, which might show (maybe not). There are also a fair number of splices; surprising on a mylar print.


How's that for attention to detail? David does other things like amp up the brightness of his bulbs to mirror the kind of light produced by carbon arc projectors back in the early days. And the results really show on screen: after two 35mm Keaton programs at the Somerville, I can say I've never seen these films look like this. They're absolutely luminescent, a delight to look at. And they probably come closer to what our great-grandparents actually saw than anything we're likely to encounter elsewhere.

Really, the more I think about it, the more I realize how the passing of time has made so much of the silent film experience difficult or impossible to recreate. The films themselves are either lost or decomposed. But even if you have a blindingly beautiful original tinted 35mm print, there are issues of aspect ratios, lighting, live music, and so on. For silent film it's a real puzzle to put Humpty Dumpty back together again.

But it's possible, and when it happens, there's nothing like it. And that's what happened last night. All three films looked great (despite David's misgivings), and audience reaction was huge—gales of laughter for the two shorts and throughout the feature, and audible astonishment as 'Seven Chances' built toward the rockslide climax. I later found we had under 100 people, but from the sound of the crowd it might have been 1,000. What a complete rush to be helping this piece of pop art from another time rise from the past and do what it was designed to do, more than 85 years after it was made!

As for the music, I did something unusual. For these kinds of programs, I like to use organ accompaniment for the short films and then switch to full orchestra for the feature, if nothing else to signal the shift in the program and give the feature a little oomph to get things started.

Last night, I did organ for 'Neighbors,' and had fun with it. But then, for some reason, as 'Neighbors' ended and 'The Goat' started almost immediately, I switched to full orchestra. I still don't know why, but at the time it felt really necessary. And yes, within a minute or so I already regretted it, because I felt it was too much for this comedy, to the point of sounding too overdone, etc., no matter how light a touch I tried for.

still, I stuck with it, and the reaction was as strong as you could want, so perhaps my fears were unfounded. But still, at the beginning of the feature, I did miss that moment when the "new" full-orchestra sound landscape gets introduced, which I think helps weave the magic spell that the best silent films can still cast over us. 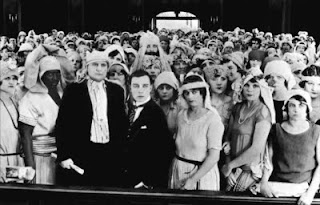 In 'Seven Chances,' the sequence that's most fun to score is when Buster wakes to find a church full of would-be brides, and shortly afterwards, when he marches down a Los Angeles street with an increasingly sizeable army of of women in wedding dresses behind him. I actually made a lot of use of the old 'Here Comes the Bride' melody, or at least the opening of it, with a descending scale underneath to make it kind of an inexorable march, and shifting keys and modes (lots of minor key variations) to build up tension as the brides spill from the side streets.

There's also that wonderful scene where Keaton's business partner sees Keaton coming from the left (but the audience doesn't), and so starts running (and the camera stays on him) to be up to speed when Keaton catches up to him. A traveling camera is used, and the whole thing is wonderfully cinematic and kinetic.

It's hard to believe that Keaton himself disliked 'Seven Chances,' but that really was the case. All I can think is that he remained torqued that the story was foisted on him by producer Joe Schenk without consultation, and that colored his whole view of the project, even though it turned out splendidly. And if Keaton felt so strongly about that, you can only imagine what he must have felt when, only a few years later, the folks at MGM really started to screw with his creative independence.

Many great comments afterwards. Thanks to everyone who attended and hope to see you at our next Somerville Theatre screening: on Sunday, Aug. 7 at 7 p.m., when the featured attraction is Keaton's 'Steamboat Bill, Jr.' (1928)
Posted by Jeff Rapsis at 4:29 PM