Next up is a pair of silent dramas that I think make a good double feature: 'Tol'able David' (1921) starring Richard Barthelmess and 'Hell's Hinges' (1916) starring William S. Hart. They're both films that can generate a surprising amount of dramatic intensity, and because they're both rural dramas filmed largely on location, they have the added dimension of showing today's audiences what ordinary life looked like a century ago or more. 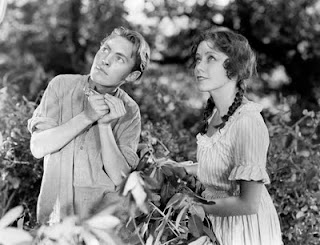 The 'or more' part is especially relevant in the case of 'Tol'able David,' which was filmed in a remote and rural Virginia valley not far from where director Henry King grew up. In the film, the place looks like life hadn't changed much since colonial days. It's a landscape full of split rail fences, horse-drawn hacks and buggies, subsistence and tenant farming, and brush-like fans (or fan-like brushes) used at dinner time to keep flies off the food. All of it adds a layer of interest that probably wasn't there in 1921, and is one reason silent film is worth watching today, I think. 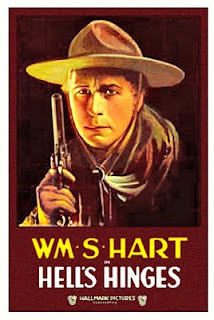 'Hell's Hinges,' though a little creakier, is like a well-made mousetrap. Once it lures you in, there's no escaping, and you're carried along to the climax of this film, which can be so intense as to be unbelieveable. I first saw this film at the Kansas Silent Film Festival some years ago, and was surprised to find such power in a movie from 1916, which is still relatively early.

I'm looking forward to doing music for both of these. The challenge will be to create two different scores in one evening, without borrowing from each other. I think I'll try to do a "strings only" texture for 'Tol'able David,' which will fit nicely with the open country old-timey rural feel of the movie. And then we'll amp things up to the full orchestral palette for 'Hell's Hinges,' and maybe uncork some snarling brass for the big ending.

I'll do the program on Thursday, July 14 at the Flying Monkey Moviehouse in Plymouth, N.H., then on Saturday, July 23 at Brandon (Vt.) Town Hall, then on Sunday, July 24 at the Leavitt Theatre in Ogunquit, Maine. For details, check out the "Upcoming Silent Film Screenings" page at right.

I'm also working up music for 'A Throw of Dice' (1929), a fascinating silent feature from India that's a distant ancestor of today's vibrant Bollywood film industry. We're screening it on Sunday, July 17 at 4:30 p.m. at the Wilton (N.H.) Town Hall Theatre. More on that in a bit. For now, here's the press release about this month's touring program. Hope to see you at a screening!

PLYMOUTH, N.H. — The countryside of rural America a century ago will return to life when the silent film 'Tol'able David' (1921), one of the top movies of its era, is revived the big screen on Thursday, July 14 at 6:30 p.m. at the Flying Monkey Moviehouse and Performance Center in Plymouth, N.H. Admission is $10 per person.

The movie, part of silent film double feature, will be paired with a gritty early Western, 'Hell's Hinges' (1916), starring William S. Hart. Hart was credited with popularizing Westerns in Hollywood's early days; his stoic 'tough guy' persona was a forerunner of characters played later by John Wayne and other actors.

Both films will be screened with live music played by Jeff Rapsis, a New Hampshire-based silent film accompanist who performs at venues across New England. Rapsis provides music for the Flying Monkey's monthly silent film series, which aims to honor the recently renovated venue's historic roots as a local moviehouse.

"These films were created to be shown on the big screen to large audiences as a sort of communal experience," Rapsis said. "With an audience and live music, they come to life in the way their makers intended them to. The Flying Monkey screenings are a great chance for people to experience films that first caused people to first fall in love with the movies."

In 'Tol'able David,' actor Richard Barthelmess plays the title role, an adolescent eager for a chance to prove to his town that he's an adult and a man. His big chance arrives when three shady escapees from jail set up shop in the community and menace the local residents. When push comes to shove, who will emerge on top?

Barthelmess, one of the silent era's superstars, won praise for his realistic portrayal of a 15-year-old, although he was 25 at the time the film was made. The cast also features actor Ernest Torrence, playing what some critics have called the most sinister villian in all of cinema.

For 'Tol'able David,' director Henry King insisted the film be shot on location in rural Virginia, where the story was set and where he grew up in the 1890s. Much of 'Tol'able David' was filmed in the countryside within a few miles of the director's boyhood home in Staunton, Virginia, and the movie infused with the spirit and details of a vanishing way of life that King knew well.

Accompanist Jeff Rapsis has written new musical material to help capture the film's rural atmosphere and also bring out the dramatic power of the story.

"This picture was a big hit when it was released, and it still holds up well today," Rapsis said. "But there's an additional level of interest now because the film captured a way of life that's long since disappeared. With the passage of time, it's now almost like a historical photograph come to life. Plus, it's a great film with a powerful climax."

'Hell's Hinges,' set in a lawless frontier town, stars Hart as a loner with a bad reputation who falls for the sister of a new and untested preacher. Will Hart's tender feelings be enough for him to renounce his past and take on the town's injustices? What price will be paid to rid the town of lawlessness and immorality?

The film, shot almost entirely on location, caused a sensation when it was first released, and is now widely regarded as Hart's masterpiece. Viewers today are still mesmerized by the intensity of the film's climactic scenes.


In 2007, 'Tol'able David' was selected for preservation in the United States National Film Registry by the Library of Congress as being "culturally, historically, or aesthetically significant."

"...perhaps the finest movie Western made before John Ford's 1939 'Stagecoach' ...as emotionally powerful as any American film of the teens, except for the masterpieces of D.W. Griffith and Erich Von Stroheim."
—Michael Wilmington, Chicago Tribute, 1994


In 1994, 'Hell's Hinges' was selected for preservation in the United States National Film Registry by the Library of Congress as being "culturally, historically, or aesthetically significant."
Posted by Jeff Rapsis at 6:54 PM