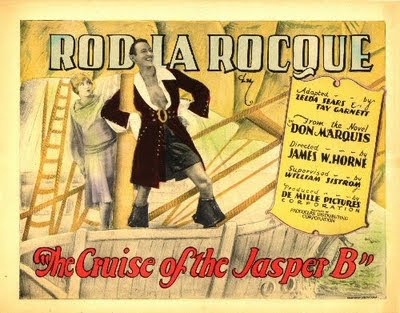 I'm still gasping for breath this evening after previewing two of the features we have slated for this year's Mirthquake: 'The Cruise of the Jasper B' (1926) starring Rod LaRocque; and Eddie Cantor's long-lost-but-now-found 'Special Delivery' (1927). They're both lulus, and they make up a significant part of the program on Saturday, Aug. 20 at the Wilton (N.H.) Town Hall Theater. Both are programmed in the block starting at 1:30 p.m., following lunch, so if you want to see two completely wacky films that you're unlikely to witness otherwise, here's your chance.

Of the two, 'Cruise' is definitely goofier, and that's saying quite a lot. Any film that opens with a title card harking back to "1725, Daylight Savings Time" is heading for zanyville, and that's where this one goes almost immediately. Not to spoil the plot, but just to give you an idea of what goes on; a last will and testament lands on the bare back of female lead Mildred Harris (the first Mrs. Charlie Chaplin, divorced by the time 'Cruise' was filmed) while she's in the tub, leaving a copy of the text on her skin. From then on, she is chased throughout the film by Snitz Edwards (yes, the popular silent-era character actor), who wants to wash her back for reasons that are too complicated to get into here. Suffice it to say, it's the only movie I've ever seen where a woman is stalked throughout by a man with a giant sponge. And it was directed by Cecil B. DeMille, of all people.!

But 'Special Delivery' is right up there as well. In it, song-and-dance man Cantor plays a postman, and I'm glad I previewed it for music. It has scenes such as one where Cantor randomly asks some street musicians to play "Bye Bye Blackbird," and they do, and he proceeds to sing a few verses, drawing a crowd. He then easily completes his day's work as a letter carrier, since everyone on his route happens to be in the audience. Nice! But if the music isn't right there, it wouldn't work so well. The supporting cast is pretty high-end in this one: you get Harold Lloyd's main squeeze Jobyna Ralston as the leading lady, and none other than William Powell playing a slimy confidence man. And look, there's Spec O'Donnell, the silent era's ultimate gawky adolescent, with a cameo appearance. And as a bonus, the film was directed by "William Goodrich," which all you silent film fans will know was the pseudonym that Roscoe "Fatty" Arbuckle adopted for his behind-camera work after being banned from the screen following the 1921 scandal.

All this and shorts subjects, too, on Saturday, Aug. 20 at 10:30 a.m. at the Wilton Town Hall Theatre in Wilton, N.H. It's free to all, and I'm eager to see how audiences react to these films, so the more, the merrier. The films run until about 4:15 p.m. that day, with a break for lunch from noon to 1:30 p.m. And for other Mirthquake screenings, please check the "Upcoming Screenings" found on the upper right.
Posted by Jeff Rapsis at 10:14 PM