Hurricane due? For now, silent films still on... 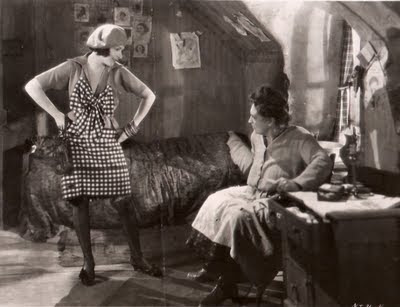 The U.S. East Coast may be bracing for a visit from Hurricane Irene this weekend, but we're still going ahead with our planned screening of two features on Sunday, Aug. 28 at 4:30 p.m.: Douglas Fairbanks Sr. in 'Flirting with Fate' (1916) and Norma Talmadge (that's her on the left in the photo above) and Ronald Coleman in 'Kiki' (1926). It's the final installment of our "Summer Romance" silent film series at the Wilton (N.H.) Town Hall Theatre, and with a hurricane possibly raging at showtime (Sunday afternoon), looks like we'll go out with some drama as well, at least in terms of the weather.

(Update Saturday morning: Irene still on her way, but Dennis M. of the Wilton Town Hall Theatre says he plans to be open on Sunday afternoon, so it's still a go as of now...)

Alas, there wasn't time to change the program to something more storm-related: Keaton's 'Steamboat Bill, Jr.' (1928), perhaps, with its cyclone finale. Showing that during an actual hurricane would have been way cool, as the kids say.

But I've been prepping the two romances, and that's what we're sticking with. Neither are mainstream silent classics, but they both have a lot to offer. In the case of the Fairbanks film, it's a fast-moving early feature made before he turned to historic or exotic swashbuckling epics, and interesting for the glimpse it provides into daily life at the time. It also has a surprisingly dark edge to a romantic comedy, and I'm curious to see how an audience responds. 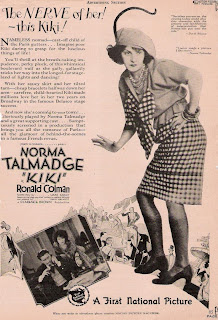 And then there's 'Kiki,' which I have been looking forward to doing for a long time, but then, when I recently screened it to start putting music together, it was completely different from the film I expected. I thought it told the story of a street urchin who was rescued from the streets of Paris by a ruthless promoter, but instead it was a lighter-than-air backstage romance! Oops! I had it confused with the life story of Edith Piaf, apparently.

With its chorus girl cast and stage setting, 'Kiki' is full of music, right from the beginning, where everyone working in the theater is shown bouncing his or her head in time to the music being rehearsed. Should be a fun one to score, but the challenge will be 'Kiki' herself. 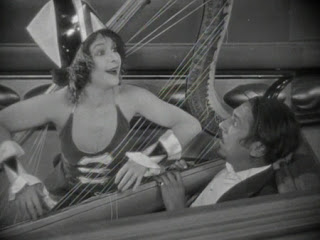 As a character, I found little about her to be sympathetic at all; rather, she came across as sort of Parisian chorus girl by way of Harpo Marx, a ruthless gnome from another world eager to disrupt the life of a man she may or may not really love. (That's her, charmingly busting through a guy's harp after falling off stage.) Or maybe kind of like Barbara Streisand in 'What's Up, Doc?' (1973), but without the accent. (Though I hear Norma did have a Brooklyn accent.)

I'm thinking that serious music of any kind is not going to help, and so I may get into Offenbach mode and stay there for this one. Will it hold together? See for yourself on Sunday, Aug. 28 at 4:30 p.m. at the Wilton Town Hall Theater. Admission free, but donations sure appreciated!
Posted by Jeff Rapsis at 3:15 PM