Just a few notes on films from this past weekend while they're still fresh in my mind. 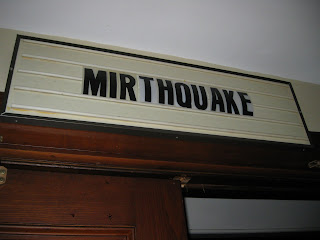 On Saturday, Aug. 20, played from 10:30 a.m. to 4:30 p.m. for films at the Wilton (N.H.) Town Hall Theatre, with an hour for lunch. Part of our annual Mirthquake festival, the morning was non-stop obscure comedy shorts and fragments, some with intertitles in German or Danish, while the afternoon saw two back-to-back features: Eddie Cantor in 'Special Delivery' (1927) and then the immensely silly 'Cruise of the Jasper B.' Hey, look! There's our name above the doors to the main theater!

Not much of an audience for these films, alas, but playing all the shorts cold (I'd never seen any of them) was a great workout for a silent film accompanist. And I really mean that, because I find it takes awhile for me to get "in the zone," meaning the music comes naturally and without a lot of conscious thought. And the best way for me to achieve that state, it seems, is to just immerse myself in the process and do it until I'm completely absorbed. Then things begin to flow with an ease that's hard to describe, and which sometimes surprises me.

I saw that happen on Saturday in Wilton. After a morning of running through one silent comedy short after another, I was in a state where the music just came naturally. And so I was as astonished and delighted as anybody as a full-fledged and finished-sounding score emerged for 'Special Delivery,' the Eddie Cantor film. I based in mostly on the old "Bye Bye Blackbird" tune by Ray Henderson and Mort Dixon, which a little research reveals was the "#16 song of 1926" and which Eddie sings (and dances to) in the middle of the film. 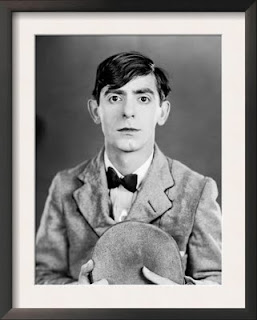 When a character in a silent film asks street musicians to play "Bye Bye Blackbird," and it's a tune that a lot of people would still recognize, then I think it's wise to come through with the tune rather than anything else. And in this case, it was fortuitous, because the melody is well-suited for Cantor's character: by turns jaunty but also a little wistful. So it became the "theme song" for the whole picture, which means not that I kept playing it over and over again, but that I put it in a blender and used little pieces of it here and there to accompany scenes and interactions. I think I only played the actual complete tune (or actually, the chorus, the part that everyone knows) twice: once at the very beginning over the opening credits, and then when Eddie actually does sing it. I had a few other melodies going for other characters, such as the Jobyna Ralston love interest and the William Powell confidence man, and it all came together very effectively, I thought.

And like a lot of things, this level was hard to sustain. The next feature, 'The Cruise of the Jasper B' (1926), was fun, but I think I peaked for the Cantor film and fatigue was starting to set in. It's a fun film and I had a good time starting out with full-fledged pirate music from the briny sea for the 18th century prologue, and then taking the swashbuckling theme and distorting it to accompany the "modern" action eight generations later. But it's hard to keep up the level of intensity during this kind of a marathon, and but the middle of 'Cruise' I found it more difficult to stay focused. Plus, it's a zany comedy and demands a certain kind of freshness, I think, that's hard to conjure up after playing for nearly six hours. :) 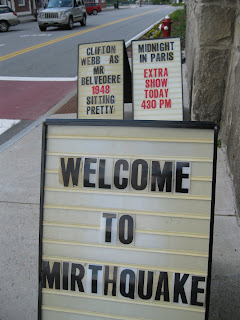 Still, it was fun, and I was surprised at the end when the lights came up to find a small group of people in attendance. Most were apparently early arrivals for the next film at 4:30 p.m., 'Sitting Pretty' (1948), but I'll take any audience I can get. I have to say, though, that if these folks were silent film newbies, the completely silly ending of 'Cruise' (with the entire U.S. military under mobilization to attack a mothballed 200-year-old pirate ship) did not probably make the most coherent impression... 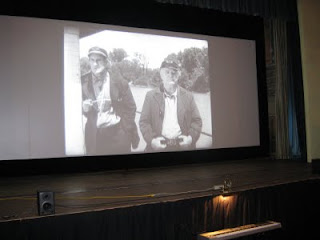 A much better impression was made, I think, the next day (Sunday, Aug. 21), when I trekked out to the Leavitt Theatre in Ogunquit, Maine for my first-ever experience with Blu-ray hi-def silent film transfers. Two nautically flavored Keatons were on the program: the short 'The Boat' (1921) and 'Steamboat Bill, Jr.' (1928), both shown in the new Kino Blu-ray transfers. (For what it's worth, a snapshot of what was onscreen during the pre-show tryout is posted here.) They did look quite sharp, even though the theater's throw lens seemed to have some slight imperfections that caused the edges to ghost. 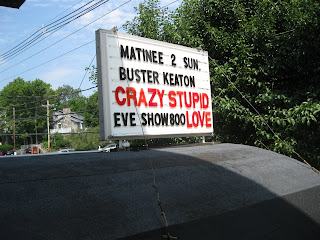 But no matter -- we had a nice crowd of about 25 people on hand, though it grew smaller when a couple realized that the 2 p.m. matinee was not a screening of 'Crazy Stupid Love' and walked out. Oh well! But here's a shot of the Leavitt's marquee, and I can see how they might have gotten confused...

And as I write this, New England is in the sights of Hurricane Irene, which is scheduled to arrive here this Sunday and go right up the Maine coast. Both those films, with their extended cyclone sequences, would have been perfect! Off by a week. Timing is everything...

Instead of hurricanes, we'll be screening films about love this coming weekend, as we finish off our mini "Summer Love" series at the Wilton (N.H.) Town Hall Theatre with a double feature: 'Flirting with Fate' (1916), an early Douglas Fairbanks; and Norma Talmadge in the restored 'Kiki' (1926). The show will go on, come rain or wind or whatever, so hope to see you there!
Posted by Jeff Rapsis at 10:15 PM