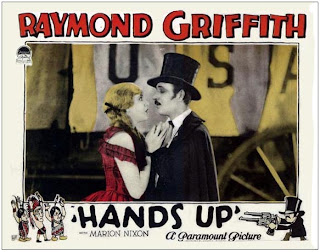 Last night went up to Plymouth, N.H. to accompany a pair of Raymond Griffith films at the Flying Monkey Moviehouse and Performance Center, which has the most interesting name of all the places I play. It being Raymond Griffith, I didn't count on a huge turnout. And it being a fine mid-summer evening with several large competing events happening right in town that night, my expectations were reduced accordingly.

So it was nice to get 16 people, and even nicer to hear some pretty energetic reactions as 'Paths to Paradise' (1925), the first Griffith feature, began to build steam. It's a wonderful film that I often call the "unfinished symphony" of silent film comedy becuse of the missing last reel, and how the film has a satisfying finish in spite of that. Still, I would love to see the missing end rediscovered at some point...

Playing at the Flying Monkey is always interesting because it's not really set up as a moviehouse (despite the name) and so the finer details of film exhibition sometimes go astray. Last night, it was lights. After we started 'Paths to Paradise,' the house lights went down, but all the side lights of the theater were left on.

Well, the film was still watchable, and there was no way I could get it fixed without stopping the music, so I just let it go. When it was time for the second film, 'Hands Up!' (1926), I knew the theater's sound guy would walk past me in the front to change the DVD, so I would have a chance to tell him to turn out all the lights, please. And that's what caem to pass. Verdict: Much better in full darkness.

One constant issue with this place is that at the end of a screening, invariably the house lights do not come up, and so we're all left sitting awkwardly in the dark for a bit. It happened again last night. It's just all part of the fun of doing this, I guess.

Perhaps the most alarming part of the screening was that for the first time ever, the DVD-R of 'Paths to Paradise' that I use began to get stuck while playing. It happened at a couple of moments early on, so I braced myself for disaster, knowing that no one connected with the theater was actually watching the film, so it would be up to me to stop everything if things ground to a halt.

Luckily, we moved on from that bad patch, but from then on I had to contend with the constant anxiety of wondering if and when the disc might get stuck for good. It's a big distraction when you're trying to use all your brain space to create music, but it's just something you have to deal with, as the film is moving on and you have to do your best no matter what. 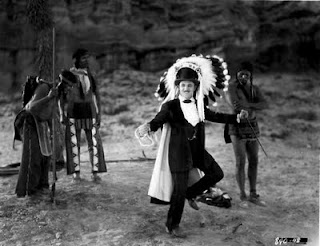 Somehow, the score kept together and I was actually quite satisfied with what I did for 'Paths,' and even more so for 'Hands Up.' For the second film, I pulled a romantic melody out of nowhere that served me in good stead for the entire film, and also came up with a little tune to underscore whenever Griffith is being a wise guy. It first appeared when he was swindling the Indian chief in a dice game, and led into the later scene when he teaches the "savages" how to dance properly, which I consider one of the highlights of all silent film comedy.

I know I'll do this film again, so I'm writing it into my book of tunes, as it would have worked perfectly in some earlier scenes and allowed the whole presentation to be more integrated. Shows you how this is a really organic process that extends from one screening to the next. And now that I think of it, the Griffith "wise guy" theme is distantly related to a figure I was using a lot at a screening of 'Steamboat Bill, Jr.' (1928) in Boston last Sunday night.

Nothing for this weekend, which is good. These screenings energize me, but over time they can be draining. It's been a heavy schedule for the past few months and I find that doing them at this pace (plus keeping up with regular life, which involves managing three dogs, helping manage a small business, teaching college, and being a husband among other things) can actually wear me down.

Up next: The three-day 'Mirthquake' festival of obscure films at venues around southern N.H. It's Thursday, Aug. 18 through Saturday, Aug. 20, and the only really big gulp for me will be a six-hour marathon in Wilton, N.H. where the films are all silent and the only music will come from me. I'm looking forward to it! I'll post more here in a bit, but if you need info now, go to http://mirthquake.looserthanloose.com