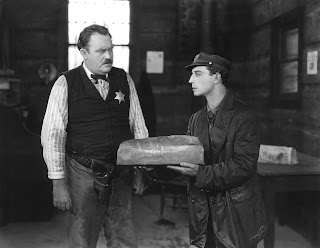 Tomorrow (Wednesday, Aug. 3) I head down to Boston for an interview at WBUR-FM, one of Beantown's National Public Radio outlets, for an interview about the upcoming screening of Buster Keaton's film 'Steamboat Bill, Jr.' (1928) on Sunday, Aug. 7 at 7 p.m. at the Somerville Theatre in Davis Square, Somerville, Mass.

I'm looking forward to this, not only because it's fun to be on the radio and chat about silent film, but also because an interview will help get out the word for this particular screening. It's worth attending because it's in 35mm, but also because a big turnout (say, 100 people or more) will encourage the Somerville's management to continue programming silent films in 35mm with live music.

I must say I've been thrilled with the shows I've done at the Somerville so far this year and I do hope we can continue. The music has worked out well, I think, but what's been truly amazing to me is the chance to see the Keaton films in 35mm on the big screen and with a bright light. To me, it's like seeing these films for the first time.

For music, I'm planning on pipe organ for the two shorts, then full orchestra for Steamboat. One thing to keep in mind with the feature is that I need to avoid ramping up too early and taking things too fast in the climax. We'll see if I can restrain myself or if I get carried away, much like Buster nearly does. And if you haven't seen the film, you'll just have to attend this Sunday's screening to find out what I mean by this.

Admission is $12 per person. See you at the movies!

Oh, and here's another nice bit of publicity. On Thursday of this week, an interview with me will be posted on a wonderfully enthusiastic classic film blog maintained by a woman known to me only as "Raquelle M." We've been in touch since the July screening and I very much appreciate her support of our screenings. The blog is called Out of the Past, and it's filled with a lot of perceptive writing about vintage cinema. Thanks, Raquelle, and hope to see you at the Somerville! :)