Back in New England after a week in another "New" -- New Mexico, where I spoke at a newspaper conference and rode on not one but two narrow gauge mountain railroads. But now it's back to silent film screenings, and next up is a film I've wanted to do for a long time: Alfred Hitchcock's 'The Lodger' (1927), which we're screening on Sunday, Oct. 2 at 4:30 p.m. at the Wilton (N.H.) Town Hall Theatre. 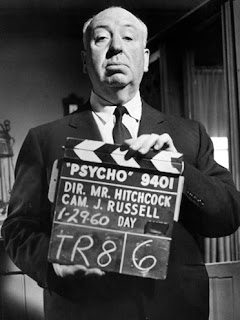 Hitchcock was still quite active when I was growing up in the 1960s and '70s, so he's been a real figure to me since at least then, which makes him one of the few folks active in silents who was still part of contemporary culture in my lifetime. As a kid, I never saw 'The Birds' (1963), but somehow knew it was the scariest film ever made, at least until Steven Spielberg came out with 'Jaws' (1975). (By the way, I saw 'Jaws' this past August at the Somerville Theatre in Somerville Mass., where they screened a fantastic 35mm print. The thought occurred to me that it owed a lot to Hitchcock's 'The Birds,')

At the time, these hadn't been released to television and hadn't been shown in theaters for years. I'd never seen any of them, so it was big news in 1984 when new prints were struck and made available for limited theatrical runs. I forget which moviehouse in NYC ran them, but a group of us made pilgrimages to see them all. I came away with a new appreciation for Hitchcock, I think in part because I saw his work as he intended it: screened in a movie theater packed with people caught up in the action. The Hitchcock screenings still stand as some of the great "movie theatre" experiences of my life.

And then, in 1989, I saw a home video release of 'North by Northwest' (1959), which I had never seen before and which instantly became one of my favorite films of all time, and remains so. At that point, I was also beginning to become aware of the contributions that composer Bernard Herrmann made to Hitch's films of this era. This appreciation would grow to admiration and, later, astonishment when I started doing film music of my own. Herrmann was a pioneer in finding ways for music to add so much to a film -- for it to serve not as background, but as a full participant. 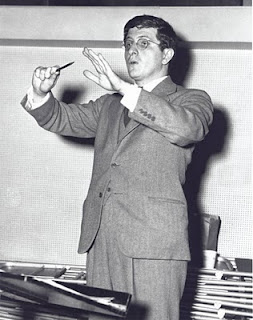 More than anyone else, I think Herrmann created what we think of today when we think of "film music." (A close second would be Carl Stalling, who scored the Warner Bros. cartoons for more than two decades. I'm serious!) And I find that I use a lot of Hermann's techniques, even though he wasn't around in the silent era, because it's a musical approach that we now all have in our bones. It bridges the gap and helps modern audiences to "get" silents, I think, at least in the way I try to do music for them.

And Hitchcock himself was one-of-a-kind: a master storyteller in film who turned the thriller genre into something of his own personal amusement park, with recurring trademarks and themes and even the famed cameo appearances. His secret, I think, was to not show everything (which cinema could do) but to leave things to an audience's imagination. And that can make them infinitely more intense and personal.

At his best (and he had a high batting average over a very long career), Hitchcock produced grand entertainments that took audiences on wild rides through the human psyche. And I'm pleased to say that many of the elements we'd come to expect from "the master" were present in 'The Lodger' (1927), his first full-fledged thriller. (Yes, he worked on films prior to this, but always thought of 'The Lodger' as his first.)

So I'm really looking forward to presenting this one on Sunday in Wilton. Here's the press release. See you there! And by the way, the Film Forum in NYC is currently screening some of Hitch's great films from the 1950s. They're running 'Vertigo' on Saturday, Oct. 29, and I hope to make there prior to a mini-Fordham reunion later that day in da Bronx. 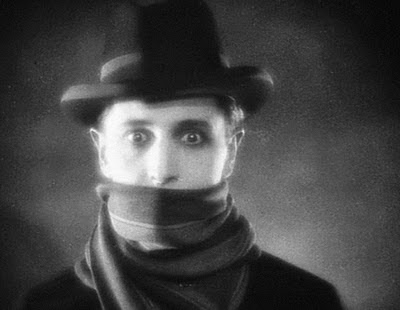 Creepy silent thriller about killings in London marked legendary director's debut; to be shown on the big screen with live music

WILTON, N.H.—A half-century of murder has to start somewhere. And for movie director Alfred Hitchcock, it began with 'The Lodger' (1927), a silent thriller that stunned audiences when it was first released, and contained many of his trademark touches.

'The Lodger: A Story of the London Fog,' will be shown at the Wilton Town Hall Theater on Sunday, Oct. 2 at 4:30 p.m. The program, the latest in the theater's silent film series, will be accompanied by live music performed by silent film composer Jeff Rapsis. Admission is free, with donations welcome. 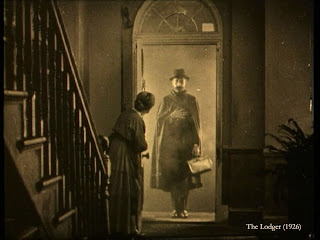 The film, shot in England and based on a story and stage play by Marie Belloc Lowndes, concerns the hunt for a serial killer in London. British matinee idol Ivor Novello plays Jonathan Drew, a quiet, secretive young man who rents a room in a London boarding house. Drew's arrival coincides with the reign of terror orchestrated by a mysterious "Jack The Ripper"-like killer, who murders a blonde woman every Tuesday evening.

'The Lodger' introduced themes that would run through much of Hitchcock’s later work: an innocent man on the run, hunted down by a self-righteous society, and a strong link between sexuality and murder. About 'The Lodger,' Hitchcock scholar Donald Spoto wrote that for "the first time Hitchcock has revealed his psychological attraction to the association between sex and murder, between ecstasy and death."

'The Lodger' also launched the Hitchcock tradition of making a cameo appearance in each of his films. In 'The Lodger,' Hitchcock appears briefly about three minutes into the film, sitting at a desk in a newsroom with his back to the camera and using a telephone. The cameo appearance tradition, which continued for the rest of his long career, came about in 'The Lodger' when the actor supposed to play the part of the telephone operator failed to turn up, and Hitchcock filled the breach.

While Hitchcock had made two previous films, in later years the director would refer to 'The Lodger,' his first thriller, as the first true "Hitchcock film." The movie has since been remade several times, most recently in 2009, in an updated version starring Alfred Molina and Hope Davis.

In reviving the original 'The Lodger,' the Wilton Town Hall Theater aims to show silent movies as they were meant to be seen—in high quality prints, on a large screen, with live music, and with an audience.

"All those elements are important parts of the silent film experience," said Jeff Rapsis, who will improvise a musical score during the screening. "Recreate those conditions, and the classics of early Hollywood leap back to life. They all featured great stories with compelling characters and universal appeal, so it's no surprise that they hold up and we still respond to them."