Harry Langdon — not so fast! 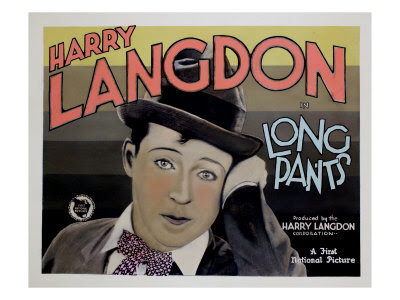 Among Hollywood's great silent clowns of the 1920s, Harry Langdon has the reputation of being an acquired taste. Among some, he's known for not producing laughs with modern audiences. I remember reading part of Walter Kerr's great 1975 book 'Silent Clowns' in which the author recalls audiences greeting Keaton's 'The General' (1927) with "constant, astonished laughter" while a screening of Langdon's 'The Strong Man' (1926) produced bupkiss. And I guess that sealed it with me.

But, after last night's screening of Langdon's rarely seen feature 'Long Pants' (1927), I'm now prepared to say that Langdon should not be sold short at all when it comes to laughter. He does very well, thank you. All that's necessary is to tell people (even those who've never attended a silent film) that Langdon was popular as a reaction to the fast-paced frenetic style of silent comedy, and it seems to do the trick.

Last night, our little-publicized screening of 'Long Pants' at the Manchester (N.H.) Public Library attracted a total of five people. (I was surprised we got any, it being the day after Labor Day weekend.) Never mind Langdon—all of them had never attended a silent film screening of any kind. But right from the start, you could tell that Harry had them. Well, Harry and director Frank Capra, whose sure hand and sense of story-telling could clearly be seen in how the film was laid out. 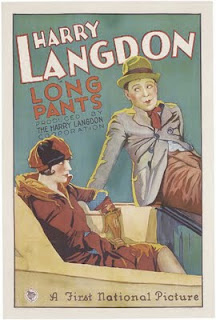 And rather than the stony silence that Kerr got when he ran 'The Strong Man,' last night Harry received the "constant, astonished laughter" that Kerr concluded was Buster's province. Really. Harry got laughs trying to impress Alma Bennett, the girl of his dreams on his bicycle, and it built steadily from then on. The weirdly dark "trying to kill his bride" sequence got a big reaction. And things really took off in the extended slapstick that follows the jailbreak, which is top-notch silent comedy.

The only moment that didn't get an expected strong laugh was when Harry finally reacts to Alma Bennett's criminal roughhousing ("I'm surprised!"), which I think forms the comic climax of the film, but which was met with silence. Oh well. But on his walk home, through the same woods where he tried to kill Priscilla Bonner earlier in the film, things grew warm very quickly, and I tried to build the music to illustrate the transformation to Harry finally realizing what he had left behind.

And so the ending, which seemed rather perfunctory me in previewing the film, came across in live performance as the perfect finish to a very satisfying comic adventure. I was as surprised as anyone! And the audience, even just five people, really seemed to eat it up. As Harry gets clobbered one last time by the upturned dinner table, somehow it all seemed just exactly right.

Afterwards, we talked, and two young gals who had taken in the picture on a whim, said they probably would not have watched it on television, but that they found 'Long Pants' to be a strangely beguiling and compelling experience in a theater. The three other folks (two sisters and their wheelchair-bound mother) agreed. And we went on talking for about a half-hour about the picture and silent films in general.

And I thought how we've screened 'Tramp Tramp Tramp' and 'The Strong Man' (both 1926) several times, and they always get a good response. And now, with 'Long Pants' joining them in getting a good reaction, I'm prepared to say that maybe Harry shouldn't be put in the "acquired taste" box. In my experience, he does very well for himself. 'The Strong Man' seems to hold its own with audiences especially well, but 'Tramp Tramp Tramp' has a succession of marvelous things, and 'Long Pants' is right up there, too.

Maybe times have changed and all silent comedy (and silent film in general) now seems fresh and new to people in a way that wasn't possible when Walter Kerr was screening flicks in the 1970s.

After all, silent film really is a different art form that seems to surprise people who've never encountered it before (in a theater with live music), which is something I saw again last night at the Manchester Library. For these newcomers, it's pointless to compare the various styles and approaches of Chaplin, Keaton, etc. For them, all the films are stripped bare of context, and so they must stand or fail on their own.

Though Harry does require a little nudge (explaining how his approach was different), the stories in his features are strong enough to carry the day, and the comedy is something that people still respond to. And so more and more I'm convinced his stuff is some of the best and most balanced that was done in the silent era—a little warmer than Lloyd, though not as maudlin as Chaplin, and often as inventive as Keaton.

But there I go comparing. 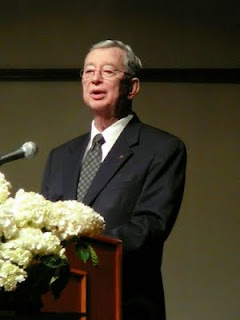 By the way, one of the more interesting personal connections to the silent film era I've encountered was meeting Harry's nephew, also named Harry Langdon, at the Kansas Silent Film Festival in 2007. (Here's a picture of him on the left.) Harry (the younger) was born around 1940, so never actually met his famous moviestar uncle, but still had a lot to say about the family and was a really nice guy.
Posted by Jeff Rapsis at 11:48 AM