Showing next: 'Way Down East' in three states 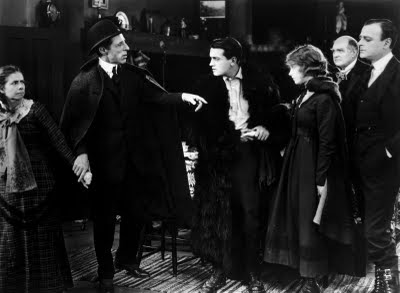 Looking forward to doing music for no less than three screenings of 'Way Down East' (1920), the great D.W. Griffith melodrama, in three states spread over four days. (That's old D.W. himself up above, addressing his cast during the filming.)

In order, the screenings are: The Flying Monkey Moviehouse and Performance Center in Plymouth, N.H. on Thursday, Sept. 15 at 6:30 p.m.; the Brandon Town Hall and Community Center in Brandon, Vt. on Saturday, Sept. 17 at 7 p.m.; and then the Leavitt Theatre in Ogunquit, Maine on Sunday, Sept. 18 at 2 p.m. (There's a chance that the Leavitt may be closed for the season by then, but for now the screening's still on.)

These road show screenings allow me to do silent film programs in multiple venues and not have to work up original music to completely different films in quick succession. Instead, I can concentrate on one film, which enables me to do a better job accompanying. Also, it's interesting to see how the music evolves over several performances.

With 'Way Down East,' the challenge is to stay sharp as this lengthy flick unfolds. At well over two and a half hours, it's definitely in the "marathon" category. But I've done it before, and it's surprising to see how much of a reaction the film still provokes throughout. 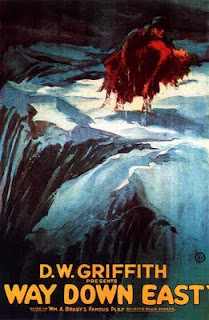 And the climactic sequence, with Lillian Gish riding on the ice floes to what seems to be certain doom -- well, there's nothing quite like it. Last time I screened this movie (a few years back in Wilton, N.H.), the audience was practically jumping out of their seats as Richard Barthelmess picked his way across the river, racing against time to save Gish. The poster image here provides an idealized version of what's at stake in this great scene.

What's the outcome? Come and see for yourself. Hey, it's not like you don't have a few options coming up. For more details, here's the press release sent out about the Flying Monkey screening on Thursday, Sept. 15. For info on other screenings, check out the "Upcoming Screenings" link at the upper right. Thanks!
* * *
MONDAY, SEPT. 5, 2011 / FOR IMMEDIATE RELEASE
Contact Jeff Rapsis • (603) 236-9237 • jeffrapsis@gmail.com

PLYMOUTH, N.H. — The iconic image of silent film star Lillian Gish trapped on ice floes and headed for a raging waterfall will once again come to life when the film 'Way Down East' (1920), one of the top movies of its era, is revived the big screen on Thursday, Sept. 15 at 6:30 p.m. at the Flying Monkey Moviehouse and Performance Center in Plymouth, N.H. Admission is $10 per person.

The movie, a blockbuster melodrama directed by cinema pioneer D.W. Griffith, is set in old-time rural New England, and was filmed partly in New Hampshire and Vermont. It stars Gish in an acclaimed performance as a wronged woman trying to make her way in an unforgiving world. Can she find love and redemption, or will she ride to her doom on the ice floes of the raging river?

'Way Down East' will be screened with live music played by Jeff Rapsis, a New Hampshire-based silent film accompanist who performs at venues across New England. Rapsis provides music for the Flying Monkey's monthly silent film series, which aims to honor the recently renovated venue's historic roots as a local moviehouse.

"These films were created to be shown on the big screen to large audiences as a communal experience," Rapsis said. "With an audience and live music, they come to life in the way their makers intended them to. The Flying Monkey screenings are a great chance for people to experience films that first caused people to first fall in love with the movies."

In 'Way Down East,' Gish stars as a poor New England country girl who travels to Boston to visit her rich relatives in the hopes of getting some financial help. While there, she's dazzled by upper class society and romanced by a rich womanizer (Lowell Sherman) who takes advantage of her innocence by tricking her into a sham marriage just to get her in bed.

Convinced she's found the husband of her dreams, Gish returns home to the country only to be unceremoniously dumped. In delicate 1920s terms, she tells her faux husband she's pregnant; he orders her to get an abortion. Instead, Gish goes into exile to have the baby, finds herself persecuted for giving birth out of wedlock, and flees even further into the country to seek refuge. The film was noteworthy in its time for addressing such "unmentionable" topics as abortion and women's rights.

Modern critics hail 'Way Down East' for Gish's remarkable performance, which continues to mesmerize audiences nearly a century after the film's release. "Gish provides an abject lesson in screen acting and brings home the importance and effectiveness of seeing a film in a theater with a crowd," wrote Paul Brenner on www.filmcritic.com in 2007. "If you are not moved at the scene of Gish baptizing her dead baby, then you should check the obituaries of your local paper to see if you are listed."

Much of the acclaimed ice floe sequence was filmed in March 1920 on location in New Hampshire and Vermont on the Connecticut River and the White River, as the winter pack ice was breaking up. Gish later said that she suffered frostbite by following director Griffith's command to always keep one hand in the water. 'Way Down East' cemented Gish's reputation as one of the silent era's major stars. She would continue to work in films and, later, television, until the 1980s. Gish died in 1993 at age 99.

'Way Down East' was based on a popular stage drama of the time, for which director Griffith paid the then-astounding sum of $175,000 to turn into a movie. The picture, however, proved to a be a huge moneymaker, taking in $4.5 million, making it the fourth-highest grossing movie of the silent film era. The receipts kept Griffith's studio afloat during a subsequent series of box office flops. 'Way Down East' would be the last of Griffith's great blockbusters; tastes changed as the 1920s rolled on and Griffith's Victorian style fell out of favor.

Accompanist Jeff Rapsis has written new musical material to help capture the film's rural atmosphere and also bring out the dramatic power of 'Way Down East.'

"This picture was a huge hit when it was released, and it still holds up well today, even with all of Griffith's moralizing," Rapsis said. "As a melodrama, it's a great film for an audience to cheer on the good folks and boo and hiss the bad guys. But there's an additional level of interest now because the film captured a way of life that's long since disappeared. With the passage of time, seeing 'Way Down East' is now like seeing a historical photograph come to life."