Very pleased at how the music turned out of 'Flirting with Fate' (1916) and 'Kiki' (1926), a double feature on Sunday, Sept. 4 that finished up our summer romance series at the Wilton (N.H.) Town Hall Theatre. (The show was postponed from Aug. 28 thanks to the remnants of Hurricane Irene.) 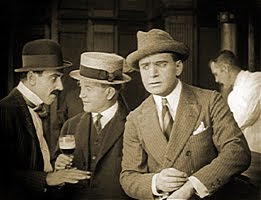 For 'Flirting with Fate,' an early Douglas Fairbanks romp, I had an all-purpose "aspirational theme" that contained the DNA, I thought, of something a lot more integrated. (Mahler, where are you?) But it worked fine for this Fairbanks film, which is slightly darker than most due to its emphasis on suicide. (Suicide? Romp?) There's Doug on the left overhearing his assassin-to-be.

I also came up with a "rump-te-dump" slow 6/8 theme for Doug in his non-crisis moments, and once again came away amazed at how Fairbanks seems to bring out that side of me without any prompting. The same thing happened in 'The Mark of Zorro' (1921) when it came time to illustrate the laid-back side of her Don Diego Whatever-His-Full-Name-Is.

Must be something in the contrast between Doug's dashing on-screen image and the need to express the opposite, sometimes, in terms of music. Used the harpsichord setting for this one, if only for contrast with 'Kiki' to come, and like a good accompanist, obeyed the instruction of the intertitles to play the Wedding March from Wagner's 'Lohengrin.'

'Kiki' was a blast to accompany. I love doing these kinds of films, where people try to outwit each other at close quarters. The musical potential for that alone is huge, especially if you have a memorable tune or two that you've already introduced, and keeping this kind of scene going seems to come naturally to me.

And I did have a good tune for 'Kiki,' I thought -- a bouncing 'Can Can'-like melody that could easily be transformed to take on pretty much any emotion needed. Rooted in the film's stage revue milieu, the music got featured play in the one big stage scene, but also served to keep the rest of the film fizzing along quite nicely, I thought. 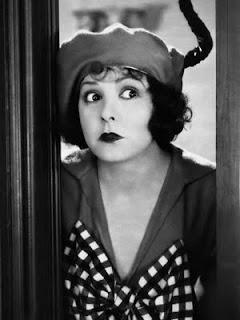 When I first looked at this picture, I didn't get Norma Talmadge as the title character. She seemed completely unsympathetic to me: selfish, destructive, dishonest, and so on. But then I realized that I was probably taking it the wrong way. I had to think of her character as more like Barbara Streisand in 'What's Up, Doc?' -- a person who single-mindedly pursues the man she desires, not letting little things like an existing girlfriend get in the way.

In introducing the film, I said only that, and I think it helped audiences not familiar with 'Kiki' (and who is these days?) get her character. And the film got a nice reaction throughout from our moderately sized crowd -- more of a reaction that I expected. The theater scene, in which Talmadge wrecks a revue by dancing anywhere but in the chorus line of which she's a member, when off especially well, with the bouncing chorus theme getting more and more wound up as the chaos progressed.

It was great fun to do music to the conclusion of this scene, which consists of the cast trying to kill each other behind the curtain, but interrupted again and again by the curtain rising for yet more applause. Switching back and forth from smooth "exit" music to chaotic argument music helped it spring to life in a way that surprised me even as we were doing it.

And I loved the love music I came up with as the film progressed. Built on a simple rising series of chords, the melody could leap up and soar any time it was needed, as I discovered in the scene where Talmadge is kissed by Ronald Coleman for the first time. And there it was, ready to be pulled out anytime the sparks flew between the two leads. And it came in handy to punch up the rather languid ending; 'Kiki' is the only silent film I know of that concludes with a phone conversation!

Up next: music for Harry Langdon in 'Long Pants' (1927) tomorrow night at the Manchester (N.H.) Public Library, then screenings of 'Way Down East' (1920) next week in Vermont, New Hampshire, and Maine.