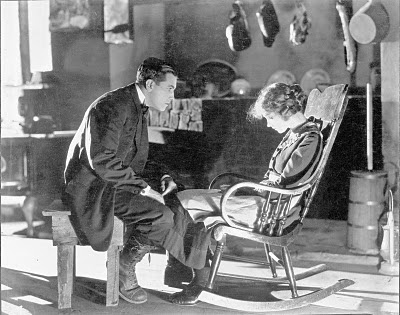 Whew! Just got done doing music for 'Way Down East' (1920) and wanted to jot down a few notes. Screening (two and a half hours without a break!) was at the Flying Monkey Moviehouse and Performance Center in Plymouth, N.H. (That's Richard Barthelmess and Lillian Gish up there in the photo.)

I don't know what it is about this movie or the other big D.W. Griffith pictures, including 'Birth of a Nation' (1915) and 'Orphans of the Storm' (1921). Viewed alone, they seem creaky as heck in comparison to the slick Hollywood films made just a short time later. But they really do come to life when shown as they were intended: in a theater on the big screen, accompanied by live music and with an audience present.

We didn't have a big audience at tonight's screening (about 20 people) but I could tell it was engaged throughout. Even some of the supposedly cornpone humor got laughs, and it was gratifying to hear the applause when Barthelmess rescues Gish from her doom at the film's climax.

In terms of scoring, less turned out to be much more. For the first hour, I swapped between a strings-only texture for the village scenes and a harpsichord setting for the Boston scenes and then later when the Lowell Sherman character comes to town. Once we got settled into the village setting, I switched to a full orchestra to lay the groundwork for the big climax.

I didn't have too much prepared in advance, as this is the kind of film where the pacing (and familiarity of it) allows me to develop material right there, and that's what happened tonight. It all came together quite nicely, especially the scene with Barthelmess and Gish meet alongside the river. Griffith's cross-cutting at times ambushed me and led to some inelegant transitions, especially with brief shots of the town chatterbox lady stalking through the streets on her way to tell her big secret.

One problem that I'd like to fix when I do this film again on Saturday, Sept. 17 (up at Brandon Town Hall in Brandon, Vt.; the show starts at 7 p.m.) is to manage things better in the final sequence. In terms of music, it's worth getting pretty intense when the squire returns home to toss Lillian Gish out, but then the secret to making it really work is to then back down.

The tempo can keep moving, but the drama and tension have to be in the pace and the harmonies, rather than the volume. First, it takes awhile for Gish to get out on those ice floes, and Barthelmess has a lot to do before he tracks her down. So big music gets awfully tiresome if it continues all this time.

Plus, you really need to let the audience hear its own reactions to the scenes on the ice floes in order for the final catharsis to burst forth in all its glory. I think I stepped on that a little tonight, but I'll try again on Saturday.

What's interesting to me about this film is how much of it seems like the stage production that it was based on. The first two hours of the film, with some exceptions, looks like it could have been acted on a stage: interior sets, characters entering and exiting, and so on.

It's only in the climax where Griffith takes the camera fully outside and brings the action along with him, setting it in an outdoor landscape filled with peril and suspense. Earlier movies had many exciting outdoor sequences, to be sure. But 'Way Down East' shows more clearly than most how directors were discovering the motion picture's potential to take audiences to new places and tell stories in new ways.

More than 90 years after its first release, that freshness and excitement are still present in 'Way Down East.'
Posted by Jeff Rapsis at 11:04 PM