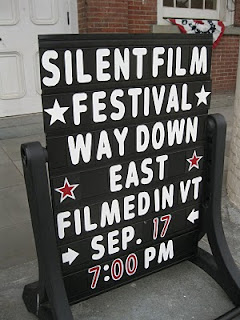 I just have time this morning to dash off a brief note about our screening last night (Saturday, Sept. 17) of 'Way Down East' (1920) up in Brandon, Vt. This has to rank as one of the all-time most satisfying silent film experiences I've ever had. The music came together well, and the audience was in the zone right from the start, reacting energetically to events as they unfolded -- sometimes surprisingly so. I've done this film several times and it's the first time, in reaction to the Martha Perkins town gossip character, I've ever heard anyone mutter the word "Bitch!"

This is a town that sustained a fair amount of flood damage several weeks ago from the remains of Hurricane Irene, which unloaded a ton of rain when it encountered the Green Mountains. This caused the modest creek that runs through the center of Brandon to swell to enormous proportions, overflowing its channel and turning Route 7 into a river. Three weeks later, the damage is all too visible: the Brandon House of Pizza, built over the river, is completely gone; other buildings have had the earth around their foundations scoured away; a cute riverside park where a month ago I heard a band play Dixieland Jazz now looks like a gravel pit.

Here are a few pictures, all taken within 250 feet of the Brandon Town Hall, where we show the films. (Good thing this month's flick wasn't 'Noah's Ark.') 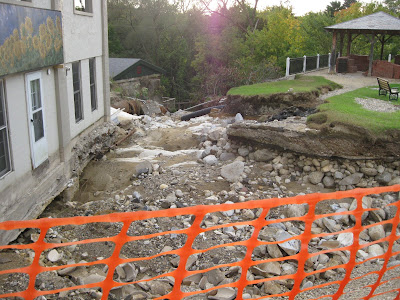 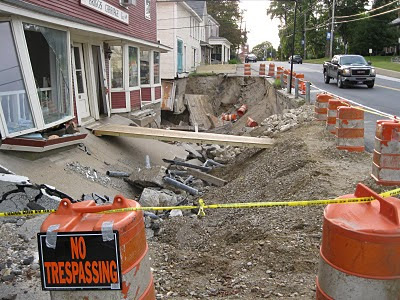 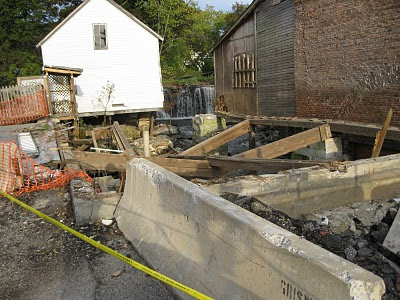 This last photo shows where the Brandon House of Pizza used to be.

So maybe a cathartic experience was in order. I don't know. But I can say that last night's reaction to 'Way Down East' was perhaps the strongest I've encountered yet, both during the film and after. Besides the rowdy audience participation (with a special emphasis on booing and hissing), we got not one but two big spontaneous cheers -- one when Lillian Gish finally stands up to the Lowell Sherman character, and then when Richard Barthelmess rescues her from the ice floes. The film is solid enough so that by then, an audience is carried along just like Ms. Gish on the ice, swept up in the unstoppable momentum. But still, the rescue produced a-hooting and a-hollering the likes of which I can't recall. (Now I'm sounding like one of those town bumpkin characters in the film.) 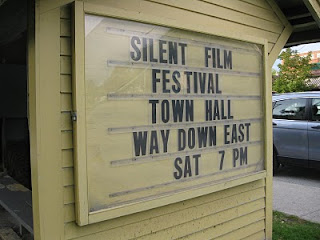 All this energy produced BIG laughs at the "triple wedding" scene at the end, and at business that taken on its own isn't all that hilarious. But it's just what is needed for a satisfying finish, and it still worked wonderfully more than nine decades after this film was released. (And in some ways, nine decades isn't all that long.) And in the "music/live performance" category, the ending could not have been better staged: as the "The End" title came on, I was just completing a cadence that worked well for the big finish, and then the projector turned off and the house lights came on just as I was hitting the last two chords, after which I instantly stood up and turned around. I write this out in detail because I want to remember what it was like: instantly, a cheer went up, the start of an ovation that lasted probably two or three minutes, which is an awfully long time. And people stood!

I can't express how much this means to me -- that the music I make up in 2011 helps a film from 1920 come to life and move an audience in this way. As I sometimes joke, I've finally found my artistic niche: collaborating with dead people! And as 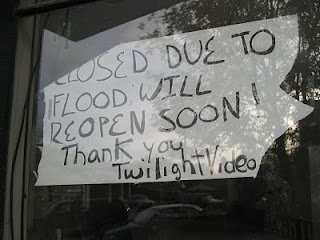 the good folk in Brandon continued to applaud, I found myself grateful for the opportunity to do this, and also glad that all the people who worked so hard to produce this film would, I hope, be pleased that it could still mesmerize an audience even as so much else about life seems to change faster and faster. Well, for at least one evening, we were able to commune with something that hasn't changed -- the ability of stories told with images and music to provide a communal experience. It's a great feeling, and I'm so glad that people can respond to it in this manner, even after their community has suffered a catastrophic flood.

Okay, now off to do music for 'The Strong Man' (1926) at the Leavitt Theatre in Qgunquit, Maine. It's the last show of the season there (summer only), and let's hope for a good turnout.
Posted by Jeff Rapsis at 11:27 AM