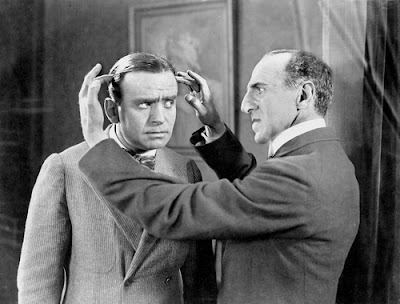 Things quiet down in December, when the holiday season seems to crowd out silent film from many calendars, including my own. But there is a good one coming up on Thursday, Dec. 8: the Douglas Fairbanks romantic comedy 'When The Clouds Roll By' (1919), which we're screening on Thursday, Dec. 8 at 6:30 p.m. at the Flying Monkey Moviehouse and Performance Center in Plymouth, N.H.

This one has Doug in top leading-man form, romping through a contemporary boy-meets-girl story just prior to embarking on the series of historical adventure roles that would cement his reputation as one of the great stars of the 1920s. (That later Fairbanks, complete with trademark pencil-thin mustache, is one of the models for the male lead character in the new silent film 'The Artist,' which still hasn't reached us here in the sticks yet.) 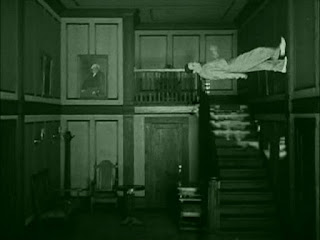 But 'When the Clouds Roll By' stands on its own as a fun film, one that pokes fun at the then-new profession of psychiatry. As such, it features some unusual scenes of Fairbanks hallucinating. At one point, after eating a dinner that doesn't agree with him, Doug dreams of being chased by his meal (in the form of actors dressed as food) through the countryside. There's another sequence in which he miraculously walks up a wall and then across the ceiling, anticipating Fred Astaire in 'Royal Wedding' by a generation.

It's not all weirdness and stunts, though. 'When The Clouds Roll By' features a strong romantic story, a wonderfully rousing climax, and boasts a great pedigree on the technical side, too—for instance, the cinematographer was none other than Victor Fleming, who would later go on to direct 'Gone With the Wind' and 'The Wizard of Oz.'

I first saw this picture at the Kansas Silent Film Festival in 2005, and at the time it came as a revelation. If film that I'd never heard of could be this good and display such raw creativity, just how much additional gold was buried in so many other silent pictures that were out there? More than many "classics," 'When The Clouds Roll By' whetted my appetite to explore the genre much further and deeper than I had previously.

See if it has the same effect on you! The screening is Thursday, Dec. 8 at 6:30 p.m. at The Flying Monkey Moviehouse and Performance Center, 39 South Main St., Plymouth, N.H. Tickets are $10 per person. For more info on the theater, visit www.flyingmonkeynh.com.
Posted by Jeff Rapsis at 10:00 AM