Encore screening of 'Metropolis' on Jan. 21 in Concord! 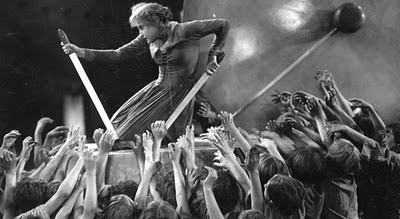 I'm both pleased and sorry to report that as of today (Friday, Dec. 30), our New Year's Eve screening of 'Metropolis' (1927) at Red River Theatres in Concord, N.H. is sold out. Great to see such interest, but I regret we're not going to be able to accommodate everyone who might want to see it that night.

But I've just now spoken to the folks at Red River Theatres and we've scheduled an encore screening for Saturday, Jan. 21 at 7 p.m. Same deal, admission $15. So if you couldn't get in (or couldn't get to) the New Year's Eve screening, there's another chance coming up on the calendar.

In the meantime, if you're itching to welcome in 2012 with some early cinema, we have two other screenings of great silent film coming up in our corner of the world: