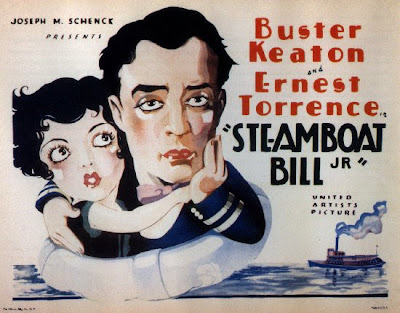 Here's a thought: If silent film were classical music, then Buster Keaton's feature films might be the cinematic equivalent of Ludwig van Beethoven's symphonies.

How so? Well, each film/symphony forms a world unto itself, and each has significant things to say, and each extends the boundaries of form and content in ways that influenced everyone who came after them.

So it's possible to think of Keaton's 'Steamboat Bill Jr.' (1928), which we're screening on Saturday, Aug. 17 at Ludlow Town Auditorium in Ludlow, Vt., as comparable to Beethoven's 'Pastoral' Symphony No. 6. Primarily I'm thinking about the storm that features in both works, but also in the outdoorsy feel that both works radiate. In Keaton's film and Beethoven's music, nature is a main character.

Also, the Keaton/Beethoven parallel might not be limited to their art. For instance: They both were short, and they both had unusual first names. 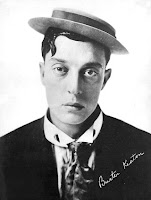 Okay, back to the movies: along these same lines, Chaplin might be Mozart, one possessed of a freakish gift that broke so much new ground in his chosen field. Mack Sennett and Keystone studios might be like Bach, forging the language itself. Harold Lloyd might be Gluck or Cherubini, composers who were amazingly popular in their day but are now less well-known. Or he might be Haydn, who pumped out symphonies (104 altogether) with a frequency akin to how Lloyd pumped out one-reelers.

And Langdon might be Brahms, the value of each man's art resting in large part in its incorporation and renewal of past traditions.

Wow, too much for one morning. So let me just say that I'm really looking forward to doing music for 'Steamboat Bill Jr.' in Ludlow this weekend. The program, which starts at 7 p.m., also includes a short comedy with music from a local pianist, so it'll be fun and interesting to be on the bill with someone else. Looking forward to it.

If you'd like to join us, there's more info in the press release... 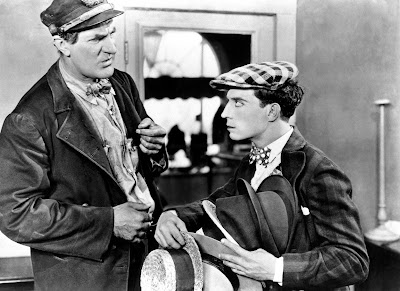 Ernest Torrence (left) seems less than pleased at Buster's choice of hats in a famous scene from 'Steamboat Bill Jr.' (1928)

The screening, sponsored by FOLA (Friends of the Ludlow Auditorium), will allow audiences to experience silent film in the way its creators originally intended: on the big screen, with live music, and with an audience. The show, like all movies at the Ludlow Town Hall Auditorium, is free and open to the public.

In 'Steamboat Bill Jr.,' Buster plays the bumbling son of a riverboat’s rough captain. When a rival brings a newer boat to the river, the family is forced to face competition, just as Buster is forced to ride out a cyclone threatening to destroy the community. Can Buster save the day and win the hand of his girlfriend, who happens to be daughter of his father's business rival?

The Keaton feature will be proceeded by a Buster Keaton comedy short feature. For this opening film short, Ludlow resident Glenn Brown will provide the musical background using the 1906 upright grand piano that he donated to the Ludlow Town Hall Auditorium.

'Silent Film Night' at Ludlow Town Hall Auditorium aimed to recreate the era before movies were made with synchronized soundtracks. From about 1900 to 1929, films had no dialogue, and were accompanied by live music at theaters across the country to around the world. Accompaniment could range from a small ensemble or just a single piano in small towns to full orchestras in big city theaters.

Rapsis will create a score for 'Steamboat Bill Jr.' on the spot, making up the music as the movie unfolds to enhance the action on the screen as well respond to audience reactions. He will perform the music on a digital synthesizer, which is capable of producing a wide range of theatre organ and orchestral textures.

Keaton, who grew up performing with the family vaudeville act, was known for never smiling on camera, an important element of his comic identity. A trained acrobat who learned at an early age how to take a fall, Keaton did all his own stunts on camera in the era before post-production special effects.

'Steamboat Bill Jr.' will be screened as part of Silent Film Night on Saturday, Aug. 17 at 7 p.m. at Ludlow Town Hall Auditorium, 137 Depot St. in Ludlow, Vt. The screening is sponsored by the Friends of Ludlow Auditorium. Admission is free; donations are encouraged. For more information about the FOLA and its events, visit www.fola.us or call (802) 228-7239. For more info on the music, visit www.jeffrapsis.com.