This weekend, at sea with Ramon Novarro
and Joan Crawford in 'Across to Singapore' 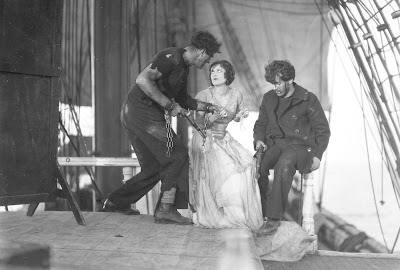 All cast members on deck! From left, Ernest Torrence, Joan Crawford, and Ramon Novarro in 'Across to Singapore' (1928).

So many sea stories, so little time. So, for our "Summer of Silent Swashbucklers Set at Sea" series at the Wilton Town Hall Theatre, we're adding an extra show this weekend.

On Sunday, Aug. 11 at 4:30 p.m., we're running 'Across to Singapore' (1928), a little known late silent from MGM that's blessed with a powerhouse cast: Ramon Novarro, Joan Crawford, and Ernest Torrence.

The film, like many near the end of the silent period, didn't get a lot of notice, as studios were already in the midst of the mad scramble to begin producing sound pictures in 1928 and 1929.

And in the case of 'Across to Singapore,' things got so careless that only a single print is known to survive. And this sole print had begun to decompose when it was copied to safety stock in the nick of time.

So it's available to us today only with several scenes marred by the fog of nitrate decomposition, which in some cases makes it look like cast members are playing their roles through a blizzard of static or an avalanche of mud.

But that makes 'Across to Singapore' even more interesting to me, and I hope to our audience on Sunday afternoon. Not only are the story and the performances of interest, but in this case you get to see first-hand what happened to so many pictures that are now lost.

In many cases, they literally crumbled to dust.

'Across to Singapore' almost joined them in oblivion, and the fact that we can present the complete picture tomorrow to an audience with live music and in a theater is something of a minor pop culture miracle, I think. I guess you'd have to call it "participatory archeology," an experience in which everyone plays a role in bringing the cultural "artifact" (in this case, a romantic drama of the seas from 1928) to life. 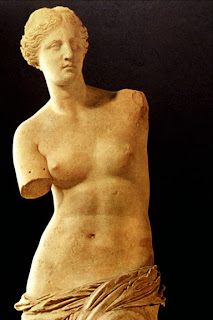 And it makes me think of works of art such as the Venus DeMilo (with its missing arms) and Schubert's 'Unfinished' Symphony, with only the first two movements (out of four) complete. Maybe there will come a time when motion pictures with missing footage will be regarded in the same way—as perhaps even more perfect because of what's not there.

I think that way already about 'Sadie Thompson' (1928), a great picture starring Gloria Swanson as a lady with a mysterious past who battles a sanctimonious preacher played by Lionel Barrymore. The conflict between the two builds up magnificently to the final reel, which is...missing!

Wow! Just as things reach the boiling point and we're going to get the big payoff we've been waiting for, the actual last 10 minutes of film is just not there for us. Talk about "dramatus interruptus!"

And yet 'Sadie Thompson' has been restored and reissued, with titles describing the missing action and pan-and-scan techniques on surviving stills to illustrate it. And at the every end, some footage from a later remake is used to help complete the tale.

I've done this film with live music and to me, the effect of the missing scenes is amazing. It almost seems as if mere film just wasn't able to contain the towering conflict between these two very strongb but very flawed characters.

And so we move into another realm, where the imagination of the audience is engaged at an even more personal level, supported by music and the materials on screen, in laying out the final battle and the picture's denouement. Somehow, it's more epic because of what's lacking, and what we as viewers must supply ourselves.

This is a total accident, but I think it's a very fortuitous one, made possible only by missing film.

It doesn't have to be a big climax, either. At the 2012 Cinefest in Syracuse, N.Y., I played music for 'Get Your Man' (1927), a recently restored Clara Bow feature that was missing either Reel 2 or Reel 3—I forget which.

Again, the action was summarized by titles and stills, and I did music to help follow the flow of the story as described onscreen, in the hopes of helping each member of the audience come up with his or her unique vision of what the scenes looked like. And I don't know about others, but it was a remarkable little moment that in some ways was better filmmaking that anything that could have actually been put on film.

Something to think about there.

Then there's Raymond Griffith's comedy 'Paths to Paradise' (1925), which ends perfectly at the end of a wild car chase and makes for a very satsifying film. But it's missing its final reel—one in which a plot twist requires the mad chase to be run all the way back to the beginning. That's one that I hope we discover one of these days.

Well, we do have the complete 'Across to Singapore' (1928), and I'm not complaining. I do hope you'll join us for this rarely screened feature on Sunday, along with a surprise comedy short that also has a nautical bent. For more details, here's the press release: 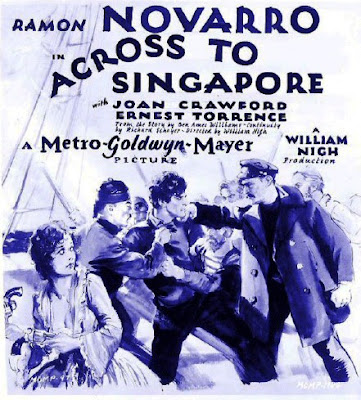 WILTON, N.H.—It was among the first feature films to star a very young Joan Crawford, and it was almost lost in the period when Hollywood made the transition from silent films to soundtracks in the late 1920s.

But a single 35mm print of 'Across to Singapore' (1928) survived, allowing this timeless and ambitious tale of the sea to be rescued and enjoyed by today's moviegoers. To that end, 'Across to Singapore' will be revived with live musical accompaniment on Sunday, Aug. 11 at 4:30 p.m. at the Wilton Town Hall Theater, 40 Main St., in Wilton, N.H.

The show is free and open to the public. It's the latest installment in the Town Hall Theatre's summer-long series of silent films set at sea.

"In warmer weather, many people head to the ocean to cool off," said Jeff Rapsis, who provides musical accompaniment for the Wilton Town Hall Theatre's silent film screenings. "This summer, we're bringing the ocean to the theater, as we showcase the enduring romance between Hollywood and the sea."

Set in the 1800s during the era when wind-powered sailing ships still ruled the seas, 'Across to Singapore' tells the story of two sea-faring brothers whose long-standing love and respect for each other unravels over a woman.

Burly older brother Mark (played by Ernest Torrence), a tough sea captain, is unexpectedly betrothed to Priscilla Crowninshield (Crawford) during a brief visit to home port. But since childhood, Priscilla has had feelings for Mark's younger brother Joel (Ramon Novarro),now preparing to ship out with Mark on his first adventure.

Can Priscilla's love for Joel survive her forced marriage to his domineering older brother?

When the brothers set sail for Singapore, a gale stirs up the situation into a full-blown crisis that leads to mutiny, kidnapping, and a murder plot. Can the brothers overcome their bitter mistrust of each other, survive the storm, save the family shipping business, and do the right thing for the one woman that haunts both of their lives? 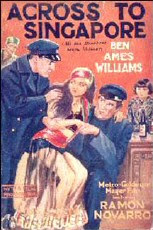 'Across to Singapore' (1928), directed by William Nigh, was among the last silent dramas produced by MGM, then the most prestigious studio in Hollywood. In addition to up-and-coming female star Joan Crawford, the film starred A-list actor Ramon Novarro, a heartthrob at the peak of his popularity, as well as gruff character actor Ernest Torrence.

However, like many late silent film releases, 'Across to Singapore' was not carefully preserved following its initial release as MGM rushed to convert to making talking pictures. The film's original negative was lost, and other materials fell victim to neglect and decomposition.

In later years, only a single 35mm print of 'Across to Singapore' was known to survive, and had begun to partially decompose before it was copied. Although some sequences remain marred by decomposition, the film is largely intact. It stands as an excellent example of silent film story-telling at its peak, just before the form was abandoned.

"We're thrilled at the chance to screen this picture, which was rescued from oblivion just in time," said accompanist Jeff Rapsis. "Because it's set at sea, we added an extra screening to our usual monthly schedule to fit it in as part of our summer series."

Music for 'Across to Singapore' will be created live by Rapsis, who specializes in improvising scores to classic silent films in live performance. For each film, Rapsis improvises a score from original musical material composed beforehand, using a digital synthesizer to recreate the sound and texture of a full orchestra.

Each of the silent films on this summer's Town Hall Theatre schedule offers a different porthole into the rich treasure trove of tales rooted in ocean-going traditions. Each also offers footage of scenes that in some cases are now quite historic, including images of ships and ship-board life that vanished long ago.

Upcoming screenings of silent film with a salty flavor at the Wilton Town Hall Theatre include:

This summer's nautical-themed movies are part of a monthly series of silent films presented with live music at the Wilton Town Hall Theatre. The series provides local audiences the chance to experience silent film as it was intended to be shown: on the big screen, in restored prints, with live music, and with an audience. 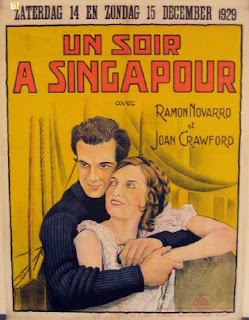 Looks like 'Across to Singapore' was playing as late as December, 1929 in Belgium, judging by this bilingual Flemish/French poster.

The series will continue with a screening of 'Across to Singapore' (1928) on Sunday, Aug. 11 at 4:30 p.m. at the Wilton Town Hall Theatre, 40 Main St., Wilton, N.H. Admission is free, with donations of $5 per person encouraged to defray expenses. For more information, visit www.wiltontownhalltheatre.com; for more information on the music, visit www.jeffrapsis.com.