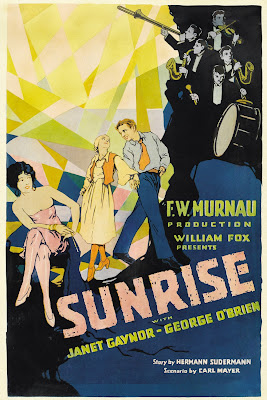 Here's one clue that 'Sunrise' (1927) should be regarded as allegorical fantasy: tubas.

They're not visible in the above poster, but yes, there are tubas in the film—or, more precisely, sousaphones. In the idealized city, the house band in a nightspot boasts at least a half-dozen of the big-belled instruments. That's more than most marching bands have!

As a tuba/sousaphone player myself, the only time I've encountered that many instruments in one place has been at various Tuba Christmas celebrations over the years. Otherwise, it just doesn't happen.

So keep that in mind when we screen F.W. Murnau's masterpiece, which will happen on Thursday, Aug. 22 at the Flying Monkey Moviehouse and Performance Center in Plymouth, N.H. It's a fantasy, folks. It has to be because of the tubas.

But before we come together to take in 'Sunrise,' a few notes about shows from this past week. 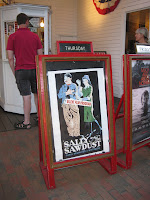 • Peter Clayton, owner of the Leavitt Theatre in Ogunquit, Maine, did it again. Greeting patrons on Thursday, Aug. 15 was a wonderful sandwich board featuring artwork from 'Sally of the Sawdust' (1925), the evening's silent film attraction.

The show went well, despite intermittent distractions from a couple of large insects attracted to my light down below the screen. I got pretty good at swatting them away with one hand while keeping the music going with the other.

• And then on Saturday night (Aug. 17), it was up to Ludlow, Vt., where the Friends of Ludlow Auditorium were staging their now-annual silent film night. It's a great place to do these programs because the audiences are so enthusiastic, and also I get to hear another guy do accompaniment. 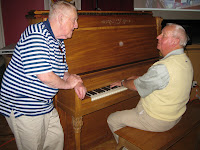 Glenn Brown, a local resident who donated a 1906 upright to the auditorium, handled music for the Buster Keaton short 'My Wife's Relations.' That's Glenn at the piano with Ralph Pace, who organizes all the auditorium's movie screenings.

After that, I chipped in with music for Keaton's feature 'Steamboat Bill Jr.' Things got off to a rocky start as the recorded soundtrack to the print we were using was inadvertently left on as the movie opened, and so at first I didn't know what I was hearing underneath my own playing. I thought it was my cell phone going off!

But then I realized what it was, and so had to actually stop playing and ask for the soundtrack to be turned off. It eventually was, and things went pretty smoothly from there. But sometimes that kind of thing can throw you mentally, and it can take a lot of effort to get back into the groove.

It doesn't help that the opening of 'Steamboat' is actually quite challenging to score, I think, because there needs to be a contrast between music for King's new steamboat and Canfield's old wreck. The music for King can't be too triumphant, and the audience for Canfield can't be too morose, or I think an audience new to the picture might start off rooting for the wrong characters.

And then there's 'Sunrise.' I'm looking forward to doing music for this film, one of the great romantic dramas of the silent era. For details and more info, here's the press release that went out earlier. Hope to see you there! 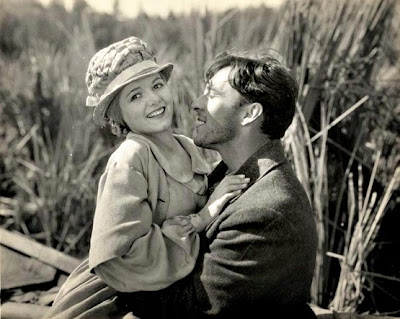 Janet Gaynor and George O'Brien in 'Sunrise' (1927). Gaynor won the first-ever Best Actress Oscar in part for her performance.

PLYMOUTH, N.H.—Silent film on the big screen with live music returns to the Flying Monkey Moviehouse and Performance Center with the Academy Award-winning romantic drama 'Sunrise' (1927) on Thursday, Aug. 22 at 6:30 p.m. Admission is $10 per person.

The screening of 'Sunrise,' starring Janet Gaynor and George O'Brien, will feature music by silent film composer Jeff Rapsis, who will accompany the film live. 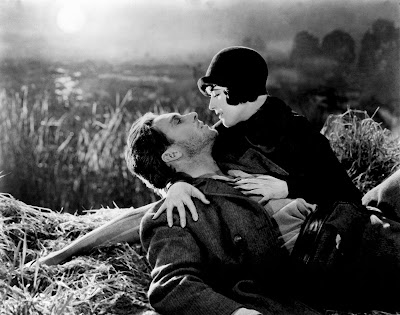 A visual representation of short-term pleasure: George O'Brien falls under the spell of Margaret Livingston in 'Sunrise.' 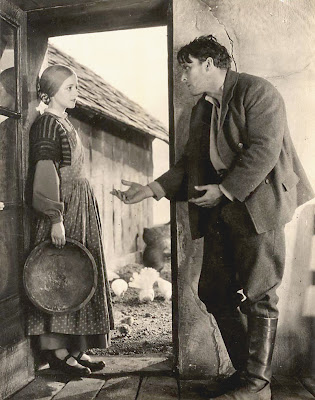 Rapsis, who uses original themes to improvise silent film scores, said great silent film dramas such as 'Sunrise' used their lack of dialogue to create stories that concentrated on the "big" emotions such as Love, Despair, Anger, and Joy. Because of this, audiences continue to respond to them in the 21st century, especially if they're presented as intended — with a live auience and live music.

"Dramas such as 'Sunrise' were created to be shown on the big screen as a communal experience," Rapsis said. "With an audience and live music, they still come to life as their creators intended them to. So the Flying Monkey screenings are a great chance to experience films that first caused people to fall in love with the movies," he said.

The Flying Monkey usually shows silent films on the second Thursday of each month. The screening of 'Sunrise' was shifted to Thursday, Aug. 22, because of a musical booking at the venue.

Other upcoming films in the Flying Monkey's silent series include:

• Thursday, Oct. 10, 6:30 p.m.: 'Safety Last' (1923) starring Harold Lloyd, Mildred Davis. The iconic image of Harold Lloyd dangling from the hands of a downtown clock is only one small piece of a remarkable thrill comedy that has lost none of its power over audiences. See for yourself as the film celebrates its 90th anniversary.

• Thursday, Oct. 31, 6:30 p.m.: 'Nosferatu' (1922). Celebrate Halloween by experiencing the original silent film adaptation of Bram Stoker's famous 'Dracula' story. Still scary after all these years—in fact, some critics believe this version is not only the best ever done, but has actually become creepier with the passage of time. See for yourself, if you dare!