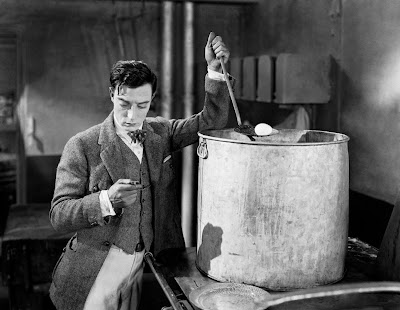 I'm pleased to report that last Sunday's screening (Aug. 25) of 'The Navigator' was just about the best show we've done in six years of presenting silent films with live music in Wilton, N.H.

Attendance was spectacular, with maybe 150 people showing up on a beautiful Sunday afternoon in late August! And Dennis Markaverich, who's run the Wilton Town Hall Theatre for 40 years, said he's never heard such laughter. So it was really one of those great silent film screenings where everything clicked and everyone really let loose.

I wasn't expecting this at all, as I've found 'The Navigator' (1924) less likely to generate that kind of reaction than other Keaton features. I just figured a comedy would make for a nice way to cap the summer series of silent film sea-going swashbucklers we've been running there.

But in terms of the music, I think I found the right formula for helping 'The Navigator' engage an audience.

It's a two-part formula, really. Part 1: show a riotous two-reel comedy short to warm everyone up. In this case, I chose Laurel & Hardy's 'Two Tars' (1928), as it has the required nautical element.

This was a risk, too, because I've found that some of the Laurel & Hardy comedies that feature "reciprocal destruction" (which this one does in spades) sometimes shock audiences with the violence depicted on screen. All it takes is one small child bawling in fear, followed by a parent rushing the kid to the exit, to kill the comedy. What kind of music do you use to accompany this?

But this time, I found the right approach, playing music of the utmost simplicity—chopsticks, mostly—to give the action the feel of a game for little kids. Which it kind of is, right? The thing is, it really worked! Laughs built upon laughs, and the final shot (of the two sailors in their crumpled car coming out of the tunnel) was greeted with a hearty roar. Nice!

And Part 2? That's to back off and play as little as possible for most of 'The Navigator.' Why? Because in order for spontaneous laughter to take root, the audience has to hear itself. And that can't happen if the music is too much.

It takes some discipline for me to lay off and let Buster's story unfold, because my tendency is to naturally respond to the on-screen action and want to "play it up." But no—Buster (and many other filmmakers) don't need that. Quite often, less really is more.

So there was plenty of room for the laughter, and once it took hold, there was no stopping it. And it built steadily, too, with Buster's gags getting more reaction as the story progressed, culminating in a huge response to the underwater sequences and then the battles with the "cannibals." (How cannibals can be identified from 1,000 yards away eludes me.) 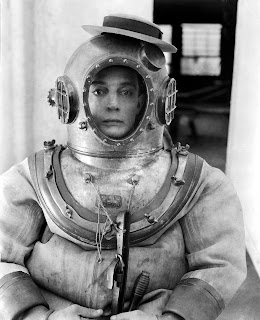 A little monster music greatly enhanced Buster emerging from the sea in a diving suit, I thought, and the laughter was just tremendous when Kathryn McGuire straddles a floating Buster and paddles back to the ship. Everything after that was pure pay-off, especially the scene where Buster is followed by a miniature cannon all over the deck, which produced shrieks from our audience.

I think another factor was way back at the beginning, in the opening remarks, which I again kept brief. For 'The Navigator,' I didn't try to "explain" Buster or get into anything big. All I did was tell the story about how Fred Gabourie, Buster's techical director, was scouting for old square-riggers to be used in 'The Seahawk' when he came across the Buford, an old passenger steamer on the market. Buster told him to buy it, and then they built the story of 'The Navigator' around what turned out to be the largest comedy prop in cinema history.

That's all. And for Laurel & Hardy, I said only this: "And before we set sail with 'The Navigator,' let's first see what happens to two sailors on shore leave named Mr. Laurel and Mr. Hardy."

Just the mention of their names produced a buzz of anticipation from those who knew what we were in for. And that probabaly piqued the curiosity of those who didn't. Anyway, the fuse was lit...

Wow, after six years, I think I'm finally learning how to do this!