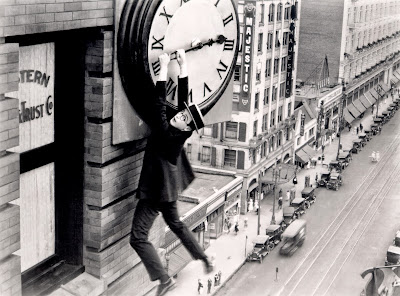 Growing up, I had read about Harold Lloyd's famous building climb and other stunts, but had never seen any of them because his films weren't available anywhere. So it was a real revelation to me in 1980 when our local PBS station began running edited versions of the Time-Life editions of Harold's films, which were produced in 1974.

And there it was: 'Safety Last,' preceded by an excerpt from 'Hot Water' (1924) and also a title card describing Harold's climb of a 12-story building, done without trick photography, as a milestone in motion picture history.

Watching the movie alone in the basement in my pajamas on a Saturday morning, I was bowled over. To me, 'Safety Last' was like Beethoven's 5th Symphony. Everyone knows the four opening notes, just like everyone knows the picture of Harold hanging from the clock. But just as I was amazed to discover that Beethoven's opening notes are only the beginning of 40 minutes of dramatic and exciting and exhilarating music, I was also thrilled to find that 'Safety Last' was so much more than Harold clinging to a minute hand.

No! It was a whole world in which Harold was forced to jump from one crazy situation to another, all of it leading inexorably, even logically, to the need to climb that building. The way it was laid out in the movie, it could happen to anyone. It could happen to me! (Though I hoped not.)

Most surprising was the music, which I instantly loved! It was a kind of Dixieland jazz, with other more dramatic stuff when needed, and it really seemed to make Harold's world compete. To me, it was like what Woody Allen had done in 'Sleeper' (1974), which I saw on TV a few years before in its network premiere. Dixieland jazz pumped everything up in a way I really responded to, and in a way that made silent comedy strut in a way that no other music could.

If you're interested, here's a YouTube clip that uses some of the music, starting with what was supposed to be Harold's "theme song": http://www.youtube.com/watch?v=g1r2zH2fzuI

At the time, all I remembered was the music was credited to the "Crescent City Jazz Band." For some reason, I concluded that the "Crescent City" was Kansas City, and so for years I was on the lookout for other albums or recordings of this nifty Dixieland jazz band from the heartland.

Well, turns out there's no such thing, in Kansas City or anywhere. And yes, I now realize that New Orleans is the Crescent City, so I was more off than I realized. I also know the "Crescent City Jazz Band" was a made-up name for a group of studio musicians in London, where the tracks were recorded in 1974.

The music for these Time-Life releases was actually created by two people: the bouncy theme song was written by Neal Hefti, a heavyweight composer/arranger of the era whose credits include the iconic "na-na-na-na-na-na-na" theme for the 1960s Batman TV show. How's that for an impressive pedigree?

But all the other music, done in a style that followed Hefti's lead, was created by an obscure film composer and pianist named Don Hulette, who was active in Los Angeles in the 1970s, doing music for pictures such as 'Breaker Breaker' (1978), a Chuck Norris action/adventure flick. He then seems to have faded from the scene.

Alas, Hulette died in 2008 at the age of 70. But it was his music that presided over my first encounter with Harold Lloyd, and at the time, it couldn't have seemed more ideal. Even before I was doing film music, I regarded the Lloyd Time-Life releases to be a perfect match of music to visual.

So I was surprised later to find that a lot of people actually despise the Time-Life editions of Harold's work, including the music. What?!

But it's true—among knowledgeable film people, the Time-Life editions are regarded as unfortunate desicrations. A lot of this stems from the fact that Time-Life chopped the Lloyd features into half-hour segments to run on TV, and also made them into a kind of "old-timey nostalgia" package, complete with corny narration.

I've never seen any of these episodes, but they do sound awful.

However, the Time-Life project also produced full scores for reissues of most of the big Lloyd features, and all of them were done with Hulette's jazzy tracks. These are what I responded strongly too, and I still regard as some of the best silent film scoring ever done.

True, Hulette (who played piano on the tracks) and the London studio players recorded only maybe a dozen segments, which were then used over and over again in scoring the different features, with some custom stuff for sequences such as the 'Safety Last' building climb. But to me, that familiarity sort of helped Harold's world hold together, and still does. Just as Lloyd's glasses were an essential part of his character and were carried over from film to film, so was Hulette's music, at least to me.

Of course there's no one right way to score a film. But what feels "right" to us is often influenced, consciously or not, by the first music we hear with a film. It's the same principle as the "first-mover advantage" in business: whoever's first in the market usually has a leg up on the me-too competition that follows.

So for Harold, with me it was the Hulette scores. They're just perfect, it seems to me, in capturing the mood of Lloyd's stories and sequences, with their buoyant optimism tinged with just a little terror or sometimes melancholy. And, most importantly, they really help the comedy come across.

A great example of how effective they are is how the opening of 'Safety Last' is scored. Opening scene: Harold behind bars, a noose hanging in the distance, is accompanied by a plaintive dirge straight out of a Tchaikovsky slow movement. It's a great set-up for what follows: a quick cut shows Harold at a busy train station, at which Hulette's music launches into a raucous high-stepping Dixieland strut.

But what happens next is very instructive. Even as Harold bids goodbye to Mildred, and she pleads with him to send "nothing but GOOD news," and mother and minister trade knowing nods, the music just keeps cranking along. No shift to drama. No nod to the significance of Mildred's words that will lead to the mess that Harold will find himself in. Instead, the music carries us along, just like Harold's optimism carries him along to what will certainly be trouble, but we don't quite know now.

Somehow that works to set up this comedy in a way that more detailed scoring wouldn't, I think. It's another example of less being more. Let the film do its work, especially at the beginning.

Also, the texture is important. Hulette's scoring uses a small Dixieland ensemble of maybe eight or ten musicians, tops. It ain't no symphony orchestra. But somehow it's exactly enough to give a comedy—either Lloyd's or anyone else's, really—a certain kind of lift without weighing it down.

I think this is an important principle. It's my impression that comedies don't do so well with audiences when accompanied by large traditional orchestras. There's a temptation to want to do too much, when it's more important to provide a kind of rhythmic framework that supports to comedy and otherwise takes a back seat, I think. Hulette's scores offer a great balance in this regard.

A few years later, I brought my appreciation for 'Safety Last' to Fordham University, where I became a member of Cinevents, the campus film society. There I became known for my continuing advocacy of silent film and 'Safety Last' in particular, which I'm pleased to say we showed via a 16mm print of the Time-Life edition, complete with Hulette's music, which was one of the high points of my undergraduate years.

(One of the low points was when we got a 16mm print of Keaton's 'The General' (1926) with no soundtrack. This was before I did live music for films, and so the solution was to play a cassette tape of Vivaldi's 'The Seasons' during the film, since so much of Vivaldi sounds like a train chugging along. It worked great until the big battle seasons, which were accompanied by 'Spring.')

Some years later, 'Safety Last' played a big role in my trying my hand at silent film accompaniment. What happened was that the film was showing at an area revival house (no names, please), and so I went with a couple of friends, preparing to renew my acquaintance with one of the great thrill rides of cinema.

We were surprised to find that the print had no soundtrack (shades of 'The General' above) and further surprised that the management had elected to have the film accompanied by a CD of Scott Joplin piano rags played endlessly, one after another.

And guess what? It killed most of the comedy, and completely robbed the film of any of its intended dramatic impact. It just flattened it!

"Geez," I thought. "Even I could do better than this." And so it was another little push in the direction of taking up the art of live film accompaniment.

And yes, within a few years I had done just that. And then it was time for me to tackle 'Safety Last' with my own music, at a screening at the historic Palace Theatre in Manchester, N.H., the grand finale to our multi-day "Mirthquake" vintage film festival of 2008.

This show was coming at the end of four days of continuous screening of films, most of them silent and all of them accompanied by me. And my synthesizer, which I'd been carting from place to place, finally had enough. Just before showtime at the Palace, it died. And that was that.

Turned out my power adapted had somehow burned out, and there was no getting a replacement on a Sunday afternoon. So we went with an improvised Plan B: we brought the Palace's old Steinway grand out of cubbyhole backstage, dusted it off, and suddenly it was time to do a piano score to Lloyd's iconic film.

Unfortunately, the screen (hung from a fly) was positioned so far downstage that the piano had to be perched right at the edge for me to be able to see the image, even in a highly distorted way. It was like watching a movie from the most comically bad seat imaginable! Even worse, however, was that no light from the screen was bouncing down to the piano's keyboard, and I had no light of my own. So, after the lights went down, I suddenly found myself flying blind.

How did it work? Harold's films always work, even when the score is a little more dissonant than expected. And the publicity value alone made the stunt worth it—there's a small group of people who continue to bring up that screening, with its last-minute piano substitute, as an exciting movie experience unlike any other.

I guess in terms of 'Safety Last,' Harold's not the only one who learns how to benefit from a publicity stunt. So maybe my synthesizer might just fail at the last minute prior to these two upcoming screenings. What will we do?

Come to the screenings and find out! :)