A 2013 Nosferatu Marathon update:
Sprinting to the finish, in more ways than one 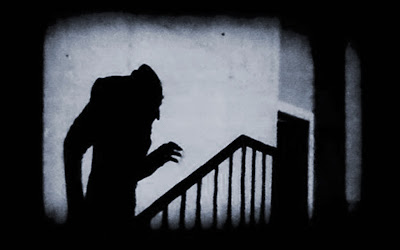 German actor Max Schreck climbs to the top of the back bleachers at Fenway Park.

Last spring, when I worked out a schedule for multiple showings of 'Nosferatu' (1922) leading up to Halloween this year, I didn't expect the Boston Red Sox to be in the World Series. After a disastrous last-place finish in 2012, I don't even think the Red Sox expected to be the World Series. 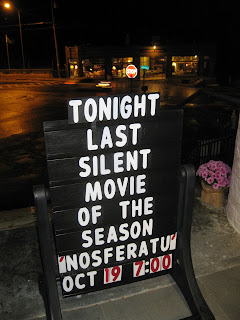 But they are, and as luck would have it, the game schedule against the St. Louis Cardinals almost exactly matches this latest batch of screenings. Really! Out of five screenings, all five have been (or will be) on game dates. (The first, on Saturday, Oct. 19, was prior to the World Series, but coincided with a Red Sox/Tigers game in the American League Championship Series.)

You'd think that deep in the heart of Red Sox Nation, this would cut into attendance. But I'm pleased to report that so far it's been the opposite! Of the three 'Nosferatu' screenings I've done, each has drawn capacity crowds, or nearly so. The owner of the Leavitt Theatre in Ogunquit, Maine said our screening on Saturday, Oct. 26 was the highest-attended event he'd had this entire season.

To me, it's a testament to the drawing power of this film, which I think grows creepier and more other-worldly as more time passes. Or maybe it's just that after two World Series championships in the past decade, Red Sox fans aren't as worked up about this. (Yeah, right!) If nothing else, it's given me fodder to include dumb jokes in my intros, such as "Hey, isn't there some kind of sporting match tonight?" or "If you really wanted to be scared, just watch the Red Sox," and so on.

Well, I'm delighted at the full houses and doing my best to bring 'Nosferatu' to life. The one special effect in this score has been a little bell I use for the chime on the small clock that is shown striking midnight at two points in the film. It's tricky, because the clock is only shown chiming a couple of times, but clearly the hands are pointing straight up to 12. So the purist in me, which wants the chime to sound exactly 12 times, needs to start them before the visual, and keep them going after (and keep count, too) to get all dozen in.

I haven't messed up too badly with this. But yesterday's screening at the Wilton Town Hall Theatre in Wilton, N.H. marked the second time this year that I've had to do the unthinkable: leave the keyboard in mid-screening to answer the call of nature. It took only a moment, but was very embarrassing and broke the spell that film had cast, at least for a moment.

It's my own fault, of course, for not addressing this inevitability prior to the screening, but I was so caught up in talking with people and then warming up at the keyboard that it just didn't happen. And I thought I could make it, but then the vampire decides to travel by ship, and so we get endless images of waves crashing and water flying and it was all just too much.

So I had to sprint to the theater's employee bathroom. (Either that or borrow someone's popcorn bucket.) It all happened quickly, and I was worried about the effect on the audience. But afterwards, several people told me they were glad I had to go, because the silence pointed out to them how important the music was to the film maintaining their interest. "Without the music, it was like staring at a brick wall," one woman said.

Among the crowds are many "newbies" to silent film, and it's gratifying to hear from a few afterwards who say they the experience was surprising (not just because of my mid-film sprint, presumably) and enjoyable.

For this round of screenings, I decided it was important to point out how fresh and unfamiliar the whole vampire story was to the film's original audience. And I figured the best way to do this was to bring in an example of how the Dracula legend over the years has been cheapened and commercialized. 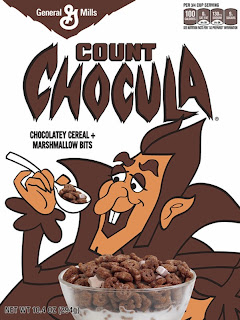 I first tried to find a hand puppet in the shape of 'The Count,' the Muppet character on Sesame Street who introduced legions of youngsters to the joy of numbers. But when that proved elusive, I got something possibly better: a box of 'Count Chocula' breakfast cereal. It's actually a discontinued product, but I lucked out in that General Mills did a special "retro-run" of the cereal for this Halloween.

So I hold up my box of Count Chocula prior to the screening, and everyone laughs, and I say, "Look what's happened to Dracula! This isn't scary—unless you read the ingredients!"

The point, of course, is to help audiences see 'Nosferatu' as director F.W. Murnau might have expected them to experience it: without a head full of commercialized clutter and images of Bela Lugosi saying "I vant to bite your neck!" and so on. 'Nosferatu' would have been shown without any of the baggage that we bring to the theater today after a lifetime of monster films.

I also point out how director Murnau changed aspects of Bram Stoker's iconic 'Dracula' novel in part to avoid having to get permission from Bram Stoker's widow to use the story. (She sued and won, anyway.) Today, long after the legal issues have been settled, the result of Murnau's decision to disguise the story is a film that does differ enough from Stoker's novel so that it seems seperate and apart from the main run of Dracula kitsch. And that's a good thing, at least in terms of 'Nosferatu' standing as a singular achievement. 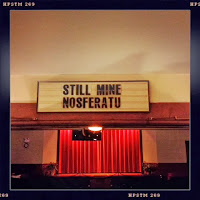 Anyway, it's been a fun run so far. One result of yesterday's screening at the Wilton Town Hall Theatre was this very unusual double bill on the main screening room, which we packed for 'Nosferatu.' Really—so many people showed up that owner Dennis Markaverich had to rustle up extra chairs, and about half-way through the show he had to open side doors to balance out the accumulated body heat.

I was particularly pleased to have old friend Ron Duvernay on hand at Sunday's screening. A high school classmate and incredibly gifted pianist, Ron took music a whole lot more seriously than I ever did, and had talent enough to pursue it at Harvard University.

I can't imagine what someone with Ron's background and abilities would make of my musical doodlings, which I've lately taken to describing as "public therapy sessions." But Ron was very generous afterwards, and it was a huge thrill to have him on hand.

Hey, who needs Facebook to track down old friends when I've got silent film screenings?

All this and Count Chocula, too. I'm a blessed man.