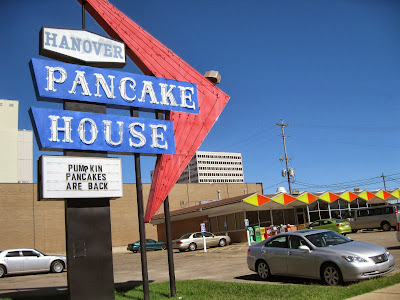 Driving back from the Keaton Celebration in Iola, Kansas to Kansas City, I stopped in Topeka for lunch at the Hanover Pancake House, a local restaurant to which I have a strange attachment.

This is where I came for lunch all by myself one rainy Saturday back in March, 2000, during my first visit to the Kansas Silent Film Festival.

I had just seen Buster Keaton's 'The Cameraman' (1928) with live music from the Mont Alto Motion Picture Orchestra, which I'd never heard live before. 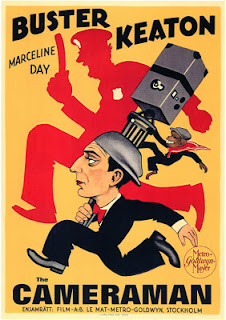 The picture resonated with me profoundly for many reasons, but mostly because it reawakened me to the immense possibilities that are all around us if we're just creative enough to recognize them.

I was at a low ebb and it was exactly what I needed.

By the way, I've just read the most perceptive analysis of 'The Cameraman' I've ever encountered. It's by a young cinema enthusiast and blogger I met earlier this month in Brandon, Vt., and it's really, really worthwhile and filled with insightful comments. Check it out.

So there I was, sitting in a booth as rain pelted the window, a sense of optimism and even excitement about life growing within me thanks to the film I'd just come 1,000 miles to see.

I picked up the menu and saw something unexpected: fried and breaded pickle spears. Really? Why not?

I found I really liked fried pickles. And ever since, they've been synonymous with rebirth and renewal. And not just any fried pickles, but the way they do them at the Hanover Pancake House, which is unusual: they serve complete spears, each breaded and fried, with the pickle inside often too hot to eat for a little while.

I went back to the festival, made new friends, and started on a fresh path that eventually led to founding a new business and so many other things. Somehow the Kansas Silent Film Festival and the Hanover Pancake House became tangible touchstones of renewal and positive energy for me.

So of course I went back, both to the festival and to the Hanover Pancake House, which hasn't changed (except there's now no smoking) and the fried pickles, which they continue to carry. And I went back not just once, but every since year since. (And sometimes in the off-season, such as this pit stop.) We all need our rituals, and this has become one of mine.

And it's odd that a restaurant that hasn't changed, seemingly, since it opened in 1969, would emerge as a personal symbol of renewal. But it did, and it felt right, and I just accepted that as one more random aspect of life that need not conform to some pattern or expectation. Why should it have to? Not everything needs to be explained, you know.

But a few years ago, I saw a photo of the the aftermath of the great F5 tornado that struck Topeka in 1966. It came at the city from the southwest, destroying a lot of Washburn University (home of the silent film festival) and carving a wide swath of devastation right up to the southern part of Topeka's downtown on Kansas Ave.

In fact, right up to where the Hanover Pancake House was.

The large cement water tower survived the tornado and still stands today. The Hanover Pancake House is located right across the street in the photo on the right.

And then it all made sense. I had wondered why Topeka's old downtown core just stopped on the south end, giving way to a random collection of low buildings and open spaces, including the Hanover Pancake House. Now I knew. It was because the whole area had been wiped off the map in 1966.

Talk about a place for renewal!

I pondered this during my off-season visit while the staff coped with a gigantic church group that arrived in two vans. It was Sunday, and the church-goers had already had their religious experience. As the fried pickles came out, I was just about to have mine.