Five screenings in four states:
It's a Halloween Nosferatu-a-thon! 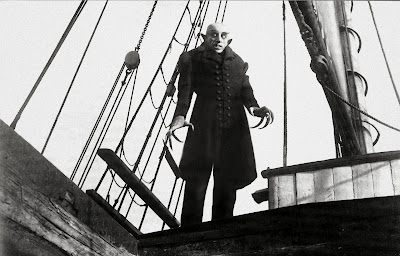 Actor Max Schreck would have a hard time accompanying 'Nosferatu' with those fingernails.

Tomorrow I embark on a daunting adventure: doing live music for five separate screenings of 'Nosferatu' (1922) in less than two weeks. And a screening of 'The Phantom of the Opera' (1925) is mixed in there for good measure. Can you tell Halloween is coming up?

First, here's a round-up of the where and when, if only to help ME keep track of where I'm supposed to be...

Wow, that's 'Nosferatu' in four different states! The vampire sure gets around. If anyone makes it to all five screenings (besides me), I'll donate a pint of blood to the American Red Cross in your honor.

This will be interesting, and not just in terms of finding my way to theaters all over New England. Because I improvise the score live each time, it'll be intriguing to see how the accompaniment evolves during the performances.

Yes, I do have a few musical ideas in my head that I'll use when I sit down for the first performance, which is tomorrow night up in Brandon, Vt. I've done 'Nosferatu' before, and I have a "vampire" chord sequence that is versatile enough to power most of the score.

But inevitably, new ideas will happen along the way. And those ideas may get carried over to the next screening, where they'll evolve a bit further, and so on. So by the time of the fifth performance in Plymouth, N.H. (on Halloween night!), the score might be totally different from what I did in Brandon 12 days earlier.

The idea that I sit down without any sheet music and create a movie score in real time seems a bit strange to people, but it's really nothing magical. Even if I don't have a idea in my head, all I have to do it play one note, and the score sometimes creates itself from there.

Just play one note and hold it, and you can go in so many directions, depending on what the movie seems to want.

One note, so many possibilities! Just in terms of the mechanics of music, there are so many ways to go. Is it the root of a chord? If not the root, which part of the chord is it? Either way gives it a certain character.

And if not part of a chord,will it want to resolve somehow? Each direction carries its own relevance to what might be happening on screen.

I'm kind of reminded of what I remember reading once in Vonnegut (probably from 'Bluebeard' (1987), one of his later novels), where an abstract artist explained his method by saying that he started by making one mark on a blank canvas, and the canvas would then do at least half the work.

I'm not really part of any school or traditional academic setting, so I don't have pupils, although I'm glad to share anything I can. And I thought about this, and most of what I do can be taught: the methods, the way to transform melodies, the way to create a certain kind of music to bring a film to life.

The only thing that I would be at a loss to teach would be where the melodies come from in the first place. I can make some observations, such as people tend to be attracted to melodies with notes that skip around in a small area, such as the "Ode to Joy" from Beethoven's Ninth Symphony.

But where does a melody come from in the first place?

With me, it just seems to flow naturally out of some place in my brain where scraps of old music (pop songs, cartoon scores, Broadway overtures, brass band marches) are continually playing. Sometimes it seems like several pieces are running at once, all colliding deep down below, like tectonic plates below the earth's surface, breaking up and recombining into something new.

That's where the tunes come from, I think. And we'll see if any keepers emerge during the upcoming Nosferatu-a-thon. It's been my experience that the state of mind I get into when accompanying a film seems to allow me to tap into this inner music more readily.

My self-editing and critical filtering gets turned down, and new melodies of all different types seems to flow more readily. Many times, I'll be sitting there accompanying a movie, and I'll be as surprised as anyone at the music flowing out of my keyboard. Geez, where did that come from?

But then afterwards, sometimes the audience tells me. This past March, after improvising a completely made-up-on-the-spot piano score to Mary Pickford's drama 'The Foundling' (1915) at Cinefest in Syracuse, N.Y., a guy came up and said he especially appreciated how I was able to use a melody from Schubert's 'Trout' Quintet.

My witty reply was to say that I thought something sounded fishy. Wow, from channeling Schubert to channeling Henny Youngman!

Well, to channel Groucho Marx: "They can't all be gems, folks."