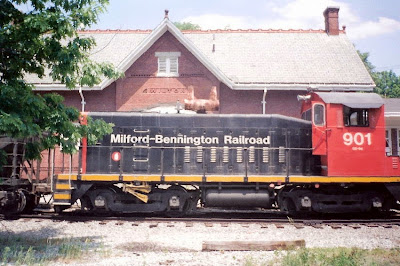 The passenger depot still stands in Wilton, N.H., but the tracks are only used for freight.

Two railroad melodramas are on the bill for a silent film program Sunday, Sept. 28 at 4:30 p.m. at the Wilton (N.H.) Town Hall Theatre.

For more info about the flicks, please check out the press release included below.

Pondering this program, I think it's a great example of how silent films, rather than fading into irrelevance as decades pass, can sometimes become more interesting over time.

In this case, both films show how not long ago, railroads played a crucial part in the day-to-day lives of most people in this country.

Really. In the United States, before the Interstate Highway system and modern air travel came into being (starting after World War II), if you wanted to go anywhere, you went by train.

Silent cinema reflects this reality. In picture after picture, characters hop on and off trains to make journeys with a frequency that's just completely alien to us today.

At the time, the nation was honey-combed and criss-crossed with rail lines connecting small towns and big cities across the land. This network was no accident, but the result of a century of railroad building all over the continent.

The dense rail network in New Hampshire in 1898. Several more lines were built as the network expanded up until the 1920s. Today, almost all these lines are gone.

But with the rise of highway and air travel, the U.S. essentially abandoned its robust passenger rail system. And this in turn greatly affected how town and cities were developed.

You know the story: with the rise of auto-dependent decentralized suburbia, city centers declined into centers of poverty, etc. Over time, fewer places in the U.S. looked like, say, downtown Bedford Falls in Frank Capra's 'It's a Wonderful Life' (1946), and more of us wound up living in Dick Van Dyke's New Rochelle, N.Y., just to pick an example.

The merits of this transformation can be debated. What silent film gives us, almost by accident, is a vivid window into how society functioned a century ago, before all these changes. And it turns out to be an incredible record.

Think of it: even the most preposterous low budget silent film program filler, in theaters for maybe a week and then forgotten, is filled with images of society and how it functioned: the clothes we wore, how we worked, where and how we ate, and, yes, how we traveled.

Seen today, such images have a layer of interest their creators never anticipated. It's accidental history. And I think it will become even more compelling as time passes.

Again, think of it: what if we had films from the time of Shakespeare, or from the Roman Empire? They'd contain a wealth of information, even just in terms of the backgrounds.

With silent film, we're not there yet. But the time will come, I think, when vintage cinema of all types will be routinely seen as unique and vital historical record, regardless of its entertainment or artistic value.

So that's one reason to preserve the films, good or bad, and keep showing them today—so that they will not be forgotten, and so future generations will be able to wonder at the unintentional revelations embedded within them.

For now, Sunday's double feature of railroad melodramas will certainly give you a sense of how much has already changed in just the past 100 years, at least in terms of how we regard railroads.

Today, railroads are regarded with such disdain (and are so disconnected to our regular lives, except when we're stuck at a crossing), that companies such as CSX find it in their interest to run public service advertising just to explain what they do.

But in the 1920s, railroads were the highly respected lifelines of the nation. They were also the subject of romance, adventure, drama, and thrills, as our two pictures will demonstrate.

And once more, think of it: in the 1920s, you could have taken a train to Wilton, N.H., where the station (still standing) is just a short walk from the Town Hall Theatre. By a miracle, the tracks are still in place (most in N.H. were torn up decades ago), but today the line only sees freight service to a quarry the next town over. Not much glamour there. 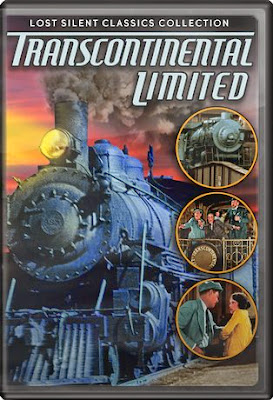 In 'The West-Bound Limited,' a fired employee takes revenge on the railroad by setting a trap for a head-on collision between a passenger train and a freight train.

In 'Transcontinental Limited,' Jerry Reynolds is an aging train engineer fast approaching retirement, but his eyes are giving out even faster! Will he still collect his pension?

Both movies were shot on location on actual working railroad lines. Made at a time when massive steam engines ruled the rails, both films are filled with scenes that train buffs will find fascinating today.

Railroad films were a popular sub-genre during the silent film era, when trains were the primary mode of long distance travel in the U.S. As an important part of the daily life of virtually every community in the land, railroads formed a popular background for many early films.

Live music for the movies will be provided by silent film accompanist Jeff Rapsis.

In reviving these two rarely shown train melodramas, organizers aim to show silent film as it was meant to be seen—in restored prints, on a large screen, with live music, and with an audience.

"All those elements are important parts of the silent film experience," said Rapsis, who will accompany the films. "Recreate those conditions, and movies of early Hollywood like these railroad dramas leap back to life in ways that audiences still find entertaining."

Rapsis encouraged people unfamiliar with silent film to give it a try.

• Sunday, Nov. 30, 2014, 4:30 p.m.: Buster Keaton in 'Seven Chances.' Finish off Thanksgiving weekend with a helping of laughter courtesy Buster Keaton. A pair of classic short comedies, then 'Seven Chances' (1925), a wild feature in which Buster has until sundown to get married or lose a fortune!

• Sunday, Dec. 28, 2014, 4:30 p.m.: Chaplin's Short Best Comedies. This Christmas, receive some laughs! Mark the 100th anniversary of Chaplin's iconic 'Little Tramp' character with a selection of his best short comedies. A great way for the whole family to cap off the holiday weekend.

• Sunday, Jan. 25, 2015, 4:30 p.m.: Silent Sci-Fi: 'Woman in the Moon.' An early sci-fi adventure epic about the first rocket ship to the moon, as imagined in 1929. Made on a grand scale; the rarely-screened final silent feature from German filmmaker Fritz Lang, director 'Metropolis.'

The Town Hall Theatre's 2014-15 season of silent film kicks off with a double feature of railroad melodramas on Sunday, Sept. 28 at 4:30 p.m at the Wilton Town Hall Theatre, 40 Main St., Wilton, N.H. Live music will be provided by Jeff Rapsis. Admission is free, with a donation of $5 per person suggested to help defray expenses.