Looking back at a RR double feature;
looking ahead to 'The Crowd' on Sunday, 10/5 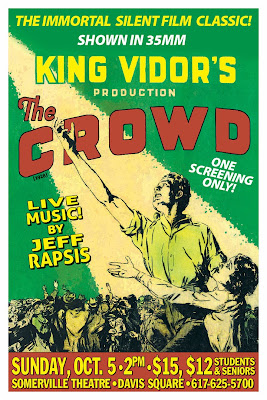 Must be a screening coming up because here's the poster!

I do hope 'The Crowd' draws a crowd. But before getting into that, first let me tip my engineer's cap to two great silent train melodramas I accompanied this past Sunday at the Wilton Town Hall Theatre in Wilton, N.H.

Both films were bottom-of-the-bill programmers intended to play theaters for maybe a week, and then be forgotten.

But the folks who put together this pictures knew what they were doing. Their work holds up today, judging by the huge reaction each got from our audience.

'The West-Bound Limited' (1923), released by Joseph P. Kennedy's company FBO, focused on a rivalry for the affections of the daughter of the railroad's president.

Opening with a dramatic action sequence, this hour-long flick played like a house afire, with one intense scene after another. 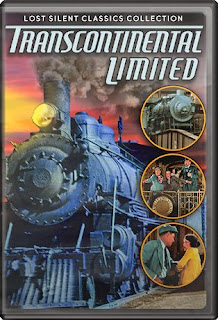 'Transcontinental Limited' (1926), from second-tier studio Chadwick Pictures, focused more on the human side of things, and had a lot more humor in it.

But it too came through with a rip-roaring railroad climax that sent our audience (and me) home breathless and smiling.

Both these pictures are great examples, I think, of how the value of a particular silent film is hard to know unless you show it before an audience in a theater with live music.

Time and time again, I've encountered films that seem like nothing special when viewed on my own, but which sprang to life when screened as originally intended.

In addition, both train pictures were of interest because they focused on an aspect of American life that's completely different from today.

Gone are the days when the nation's cities and towns were connected by a dense network of passenger rail services. So it's fascinating to see society arranged and functioning in such a different way.

One issue with accompanying 'Transcontinental Limited' was the prominent role played by a then-popular novelty song, "Mademoiselle from Armentières," better known as "Hinky Dinky Parlez Vous."

I took a snatch of the melody, and also the rhythm of the song (which I didn't otherwise know) and used it extensively as the score emerged.

But that wasn't enough for about a half-dozen people in the audience, who came up afterwards to sing the whole thing in an impromptu recital right there in the theater. 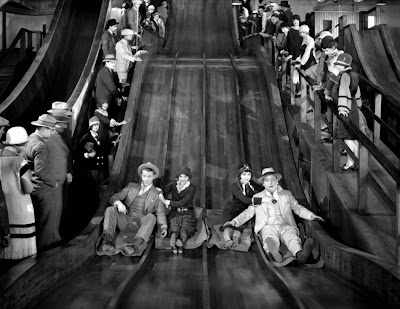 Sliding into 'The Crowd,' with cast members on location at Coney Island.

About 'The Crowd': this was one of the first films I attempted to score. At the time I only had access to a blurry digital transfer, but the power of King Vidor's vision still came through.

I haven't done it since, due mostly to the inability to get a decent-looking edition. Also, I wanted to make sure my technique was up to what this film required.

Well, the "good-looking edition" question was solved earlier this year when Ian Judge, manager of the Somerville Theatre, got access to a 35mm print of the film, and scheduled it as part of the theater's monthly 'Silents Please!' series.

So I'm really excited to see this film on the big screen as originally intended. Why? Plenty of reasons are found in the press release below, which has all the details.

And as for technique—well, I don't know. I'm planning on doing an "all strings" score, using material that will grow out of open fifths with a kind of "Fanfare for the Common Man" kind of feel.

I think one of the keys to having music help tie the film together is to have some specific and easily recognizable music for scenes with clowns in them.

I won't say why, because I don't want to spoil the picture if you haven't seen it. And also, there's one specific tune (played by record on a Victrola) that I need to have ready.

Still, no matter how much experience I get, when I sit down to accompany a film, it's like stepping into the batter's box. Anything could happen, from a home run to a strikeout.

But my confidence is growing. Just today (Tuesday, Sept. 30), I'm headed down to Harvard University in Cambridge, Mass. to accompany a program of Chaplin films for a silent cinema course.

Harvard! As I've been joking lately, I might not have received that acceptance letter 32 years ago—but I knew if I waited long enough, I'd eventually get the call!

Hope to see you in the crowd at 'The Crowd' on Sunday, Oct. 5. More info in the press release below... 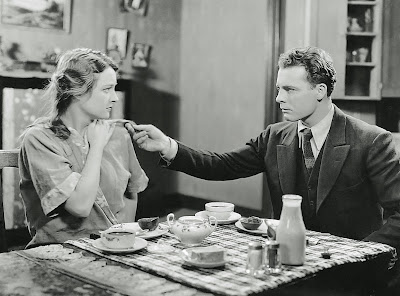 Tension is on the breakfast menu for James Murray and Eleanor Boardman in 'The Crowd' (1928).

Silent film masterpiece 'The Crowd' to be screened in Somerville

SOMERVILLE, Mass.—One of the first major Hollywood films to use the life of an average family to create intense and moving drama will highlight the next installment of the Somerville Theatre's "Silents Please!" series.

'The Crowd' (1928), an MGM silent film that probed the dark side of the American dream, expanded the language of cinema and earned two nominations at the first-ever Academy Awards.

'The Crowd' will be screened on Sunday, Oct. 5 at 2 p.m. at the Somerville Theater, 55 Davis Square in Somerville, Mass. Admission $15 for adults; $12 for students/seniors.

The movie will be accompanied live by silent film musician Jeff Rapsis. 'The Crowd' will be shown in the Somerville Theatre's main theater using a 35mm print.

'The Crowd' follows one man's story from birth through young adulthood, marriage, and family life. Although a drama, the film embraces a wide range of emotions from comedy to tragedy. Above all, it used the then-new art form of motion pictures to transform an ordinary life into a powerful narrative and universal story that even today maintains its power to move audiences.

In addition, director King Vidor insisted on giving 'The Crowd' an unprecedented realism, shooting scenes on location on New York City streets. Unusual for a big studio production at the time, the film featured scenes shot in a small apartment's cramped and unglamorous bathroom, including Hollywood's first-ever on-screen flush toilet. 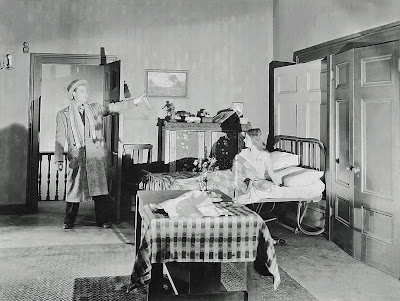 "This is the one first pictures that compelled audience members to think hard about their own lives—where they were going, and what it was all about," said Ian Judge, manager of the Somerville Theatre. "It connected powerfully with audiences, and showed the power of the movies to really move people in ways that no art form had done before in the same way."

The film stars James Murray in the lead role as John Sims and Eleanor Boardman as his wife, Mary.

'The Crowd' mixes striking visual styles and moving camera cinematography, influenced by 1920s German cinema and F.W. Murnau in particular, with intense, intimate scenes of the family's poignant struggle. Vidor avoided casting big-name stars in the film to attain greater authenticity; Murray was a studio extra, and Boardman was a minor actress and Vidor's second wife.

Vidor's great financial success as a director at MGM in the 1920s allowed him to sell the unusual scenario to production head Irving Thalberg as an experimental film as the silent era was ending. MGM chief Louis B. Mayer reportedly disliked the film for its bleak subject matter and lack of a happy ending. In fact, several alternate upbeat endings were filmed and previewed at the studio's insistence, but Vidor persevered and the film was released with the original, logical conclusion.

At the first-ever Academy Awards in 1929, 'The Crowd' was honored with a nomination for "Unique and Artistic Picture" and Vidor nominated for Best Director. 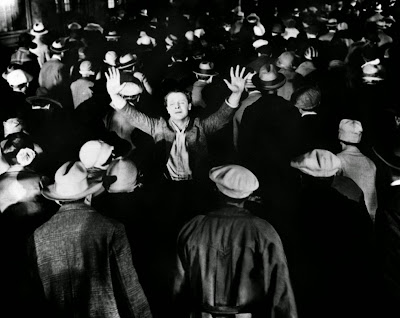 James Murray in 'The Crowd.' After an amazing performance, Murray sank back into obscurity and died young in the 1930s.

With then-new talking pictures capturing the public's attention, 'The Crowd' was only a modest box office success upon its initial release. Since then, it has been consistently hailed as one of the greatest and most enduring American silent films.

In 1989, this film was one of the first 25 films to be selected for preservation in the United States National Film Registry by the Library of Congress as being "culturally, historically, or aesthetically significant."

Although 'The Crowd' was recognized as a brilliant achievement, few directors followed in Vidor's footsteps right away. Depression-era audiences sought escapist entertainment over the stark realism of 'The Crowd,' which filmmakers would not embrace again until after the end of World War II.

Director Jean-Luc Godard was asked in the 1960s why more films were not made about ordinary people, and his response was "Why remake 'The Crowd?' It has already been done."

Recent reviewers have found 'The Crowd' as compelling and timeless as ever.

"Certainly one of Vidor's best films, a silent masterpiece which turns a realistically caustic eye on the illusionism of the American dream. ... The performances are absolutely flawless, and astonishing location work in the busy New York streets lends a gritty ring of truth."
—Tom Milne, Time Out

"Perhaps the best silent film ever made and undoubtedly the most existential. If you don’t like the silent era, think again — and take a peek at The Crowd."
—AMC Movie Guide

'The Crowd' will be shown using a 35mm black-and-white print on the theater's big screen with correct lighting, speed, and aspect ratio. Although the Somerville, like most movie houses, recently installed digital projection for first-run pictures, the theater remains committed to keeping alive the experience of film in the 35mm format.

"For more than a century, movies were shot and edited and watched using 35mm film," said Rapsis, who will create live music to accompany the film. "Today, the chance to see a vintage film in its original format and in a theater is increasingly rare. The Somerville's screening of 'The Crowd' is a chance to experience this movie in the format and setting it was designed for."

• Sunday, Nov. 16, 2 p.m.: 'The Strong Man' (1926) starring Harry Langdon. With World War I over, baby-faced soldier Harry Langdon searches for the girl who sent such moving letters to him in the trenches. Directed by a very young Frank Capra, 'The Strong Man' is today hailed as Langdon's best feature, and also one of the great comedies of the silent film era.

'The Crowd' will be screened in 35mm with live music on Sunday, Oct. 5 at 2 p.m. at the Somerville Theater, 55 Davis Square, Somerville, Mass. Admission $15 adults, $12 students/seniors. For more information, call (617) 625-5700 or visit http://www.somervilletheatreonline.com. For more info on the music, visit www.jeffrapsis.com.