Coming out: Intimate details of
my first bi-keyboardal experience 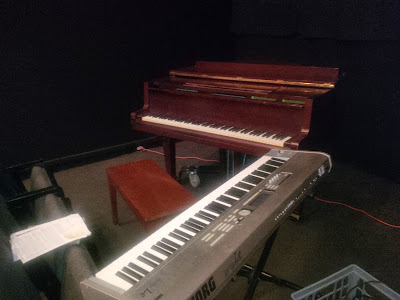 The set-up at Harvard University's Carpenter Center for a class screening on Tuesday, Oct. 21.

Once you go bi-keyboard, you can't go back.

That's what I discovered this week at Harvard University's Carpenter Center, where I did live music for a class screening of two silent films.

For 'Usher,' I used strings exclusively, augmented by an actual clangy school bell for some key images. I thought it held together well.

In the unexpected challenge department, the Harvard Film Archive's 35mm 'Usher' print turned out to be a French edition with no English subtitles.

So instructor Adam Hart did his best to translate on the fly, which required me to tone down the music each time so he could be heard.

But it was the seductive 'Smiling Madame' who led me to my first bi-keyboard experience.

Unplanned, of course, as all the best adventures seem to be. But it happened, and here's how:

The 'Madame Beudet' film frequently references a performance Gounod's 'Faust.' So for the score, I figured on using the opera's famous waltz in a full orchestral texture throughout the movie, evolving it as the story proceeded.

But early on, the wife character is seen playing dreamy music on a living room piano. (Later, we see the actual sheet music: it's Debussy's "Jardins sous la Pluie," or "Gardens in the Rain.")

Yes, I could evoke the impressionistic feel of this piece (whole tone scales, etc.) on the synthesizer, no problem. (In other words, fake it.)

But right next to me was the Carpenter Center's big Yamaha grand piano. And I couldn't resist the idea of using an acoustic piano for scenes of when the family upright gets played.

It took some finagling to get the big grand positioned so that I could reach it (and its pedals) quickly, and also so the keyboard would be lighted from the screen. (I didn't want to have a light on all during the film just so I could use the piano for a few moments.) 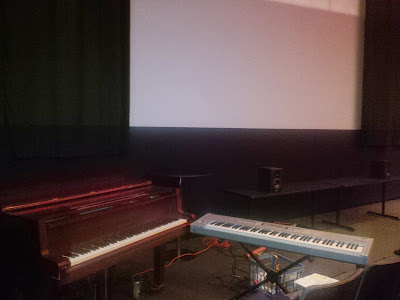 Another view of my set-up, this time showing the screen.

Turned out the synth and the piano were exactly in tune. So, without having to modify the synth's pitch, I could play both instruments together if I wanted to. Which I did.

It took a little getting used to, but I found playing two keyboards, one on either side of me, wasn't impossible.

It was actually kind of fun to mix sustained synth chords to back a melody played with staccato piano notes, or vice versa.

I felt like bandleader Paul Shaffer on the David Letterman show, hemmed in by black and white keys all around me! 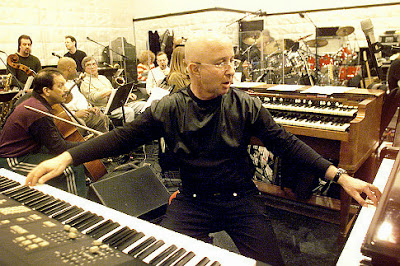 Now all I have to do is shave my head.

I found that by straddling the piano bench, I could even use the sustain pedals for each keyboard at the same time. Flexibility exercises would have helped on this. 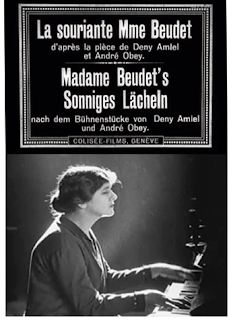 So when Madame Beudet is seen playing the piano (as at left), the score including the sound of a real piano, even if it was faux Debussy. (Faux sounds so much better than fake. Maybe because it's French.)

And when Monsieur Beudet mocks his wife's preference for Debussy by banging on the family piano—well, I was ready for that, too. I specialize in banging.

So it worked out quite well. And now, when asked to accompany films at Harvard, I'm going to be on the prowl for opportunities to layer in acoustic piano with a synth background, or vice versa.

And what if I also bring along my bass tuba? It may or may not be for a French film, but I can't help but think this combo would be a "menage a trois."

P.S. Wherever there's a piano, there's usually a piano bench. Most piano benches come with a storage space that can be accessed by lifting the hinged seat, somewhat like opening a treasure chest.

And like a treasure chest, you never know what you'll find in the world's piano benches.

I've found everything from tennis balls to sheet music that once belonged to an elderly acquaintance who had died more than a decade ago.

So from now on, I'm taking it upon myself to document to contents of the piano benches I encounter, starting with the one at Harvard University's Carpenter Center.

Think of it as a low-rent version of Geraldo opening Al Capone's safe.

The bench itself clearly contained items of some heft. Upon opening it, I found... 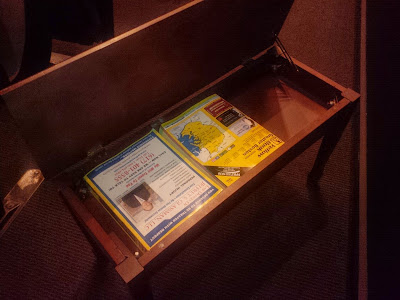 Join us next time for another episode of "Piano Bench Mysteries."