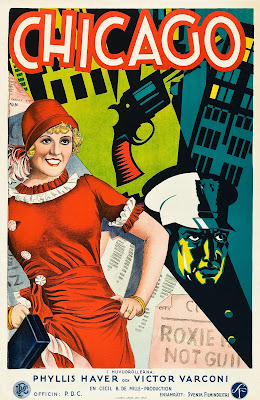 A wild poster that captures the film's flamboyant spirit, I think.

Somewhat ironically, the biggest challenge in accompanying the silent movie version of 'Chicago' (1927) is an on-screen player piano.

But yes. In the film—being screened on Thursday, Oct. 9 at the Flying Monkey Moviehouse in Plymouth, N.H.—several scenes of violence take place in a room where a player piano is clanging away at some up-tempo tune.

So how to handle that in creating music for the film?

It's a tougher question that you might realize, as music in silent film does not merely serve to illustrate what's happening on screen, or even just to set a mood. 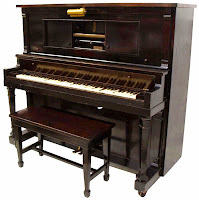 What I mean is that for most people, silent film is not an everyday experience. Today, we're used to movies (and television, and everything else) that come with everything: sound, color, snappy dialogue, the works.

By necessity, silent film emphasized the visual aspect of motion pictures. The spoken word, and particularly tone of voice, wasn't available to help communicate important shifts of mood that signal to an audience that something important has just happened, making it easy to follow a story.

It's kind of like the difference between a phone conversation and an e-mail. As anyone in today's world knows, because e-mail lacks all-important tone of voice, a friendly note or comment can sometimes be interpreted as angry by the receiver. Hence the development of emoticons. :)

And because of that, an audience at a silent film needs to pay attention to the screen closely to keep up. Miss that raised eyebrow of Buster Keaton, and you might miss a shift in attitude that's just been communicated. And then you might not quite get what happens in the next scene.

I've found that music can help a modern audience stay with a film from another era. It can provide signals that help validate what we're experiencing in this now-arcane art form. Did what I just see have any real importance? It must have, because the music changed.

So what does this have to do with a player piano in 'Chicago?'

Well, if I just crank up the old pianola sound while the instrument is playing, I risk trivializing the importance of the on-screen violence or miscue the audience about its significance. And thus I would undercut a lot of the dramatic impact of the movie yet to come. "He's playing old-time piano ragtime, so what I saw can't be that serious."

On the other hand, if I do my job really well with the music, the player piano might somehow be able to communicate the sheer insanity of what's happening on screen. People are literate enough, in terms of film music, I think, to recognize irony when they see it, or hear it.

Because the player piano is featured so prominently in the scenes, including close-ups of the keys going up and down in ghostly fashion—it's clear the filmmakers wanted it to be emphasized. Still, I'm wondering how accompanists of 1927 handled this.

Another problem is audience expectations. With the Kander and Ebb stage musical version of 'Chicago' continuing to take the world by storm, I'm sure some people will expect to hear tunes from that woven into our screening.

Generally, I agree with accompanists who feel that when you insert a recognizable tune into silent film music, it causes the audience to think, "Oh, I know that tune," and thus interrupts the spell that a good silent film creates.

So sorry, but there won't be any "All That Jazz" in Thursday night's screening.

If you'd like to see how it all turns out, please join us for this terrific melodrama. More info on the film and the screening is pasted in below: 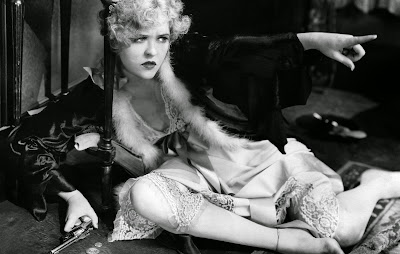 Phyllis Haver has more than one weapon in 'Chicago' (1927), and she's not afraid to use either of them.

Popular jazz-age melodrama, long thought lost but recently rediscovered, to be shown on the big screen with live music

PLYMOUTH, N.H.—Long before it became a long-running Broadway musical and then 2002's Best Picture, the story of 'Chicago' first achieved worldwide fame as hit silent film.

See for yourself when the original 1927 screen version of 'Chicago' is screened at the Flying Monkey Moviehouse and Performance Center on Thursday, Oct. 9 at 6:30 p.m.

The program, the latest in the theater's silent film series, will be accompanied by live music performed by silent film composer Jeff Rapsis. Admission is $10 per person.

The silent film version of 'Chicago,' based on a hit 1926 stage play, was for many years thought to be one of the many silent films that were completely lost, with no copies surviving in any archive. But in 2006, a pristine original print of the film was discovered in the archives of iconic director Cecil B. DeMille, who supervised its production. 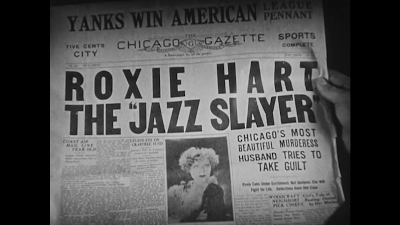 The headline says it all. No equivalent to the SCREAMING HEADLINE in today's Internet world, other than people who type in ALL CAPS.

In reviewing the film, critic Jamie S. Rich of www.dvdtalk.com called it a "melodrama that remains fun to watch even 80 years later. It's more than a historical curio or an antiquated prototype for its more famous descendent; DeMille's production is stylishly ambitious and smartly constructed. This loose-limbed crime story is evidence of just how assured cinema had become prior to the advent of sound."

In reviving the original 'Chicago,' the Flying Monkey aims to show silent movies as they were meant to be seen—in high quality prints, on a large screen, with live music, and with an audience.